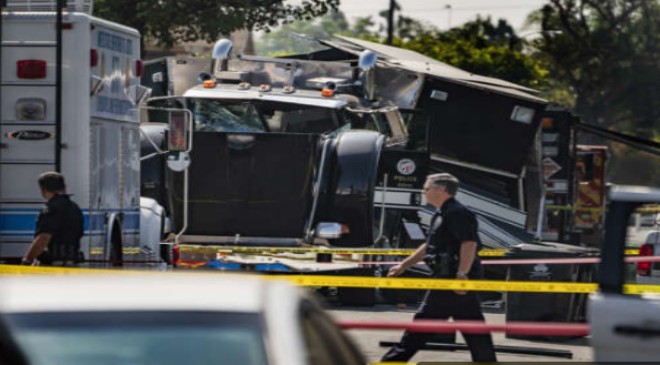 The vessel exploded, and debris rained down on scores of residences, businesses and vehicles on June 30 in South LA, just days before July Fourth. Dozens were displaced and some have never returned to their neighborhood. The explosion was considered highly unusual because such containment chambers are designed to withhold blasts.

Multiple times, “Bomb Technician C” told his squad about his worries ahead of the detonation. “I said, ‘uh, this is too much to do one shot, we’re gonna break them up, right?’” he recalled saying to his colleagues. “I have a bad feeling … this is not good … this is too big.”

He was ignored — and repeatedly told to relax. But he was right.

The bomb technicians made major miscalculations, federal investigators found, and loaded the containment chamber above the equipment’s safety rating. The U.S. Bureau of Alcohol, Tobacco, Firearms and Explosives estimates that the catastrophic blast caused more than $1 million in damage to the area. More than 400 claims — the precursor to a lawsuit — have been filed to the city attorney’s office.

The bomb technicians — as well a detective supervising the squad who was faulted in the inspector general’s report for inadequate supervision — have been taken off field duty or put on paid administrative leave and may face discipline. None of their names have been made public.

The inspector general’s 48-page report was released late Friday as part of the agenda for an upcoming police commission meeting. The report disclosed the technician’s ignored warnings for the first time.

Officer Drake Madison, an LAPD spokesperson, said the department did not have a statement Friday night. The Los Angeles Times first reported the report’s publication.

Fireworks are illegal to sell or possess in Los Angeles and in unincorporated areas of the county. The illegal fireworks were found at the home of Arturo Ceja III, who pleaded guilty in federal court last year to one count of transportation of explosives without a license. Online court records do not list a sentencing date.