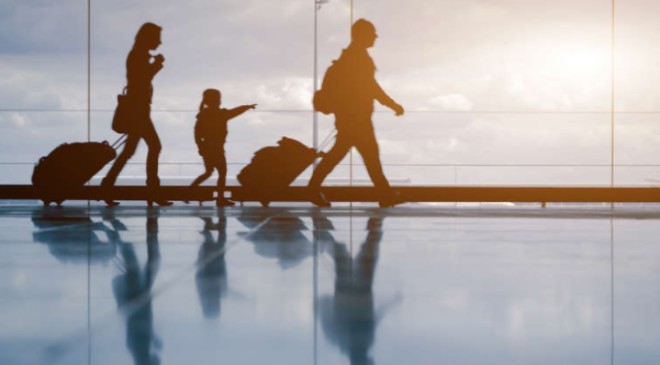 The Russian invasion of Ukraine has already killed hundreds, sent thousands of refugees fleeing, and sent ripples throughout the entire world.

With closed airspaces in and around the conflict leaving some stranded and flights rerouted, impending fuel price jumps, airlines and countries cutting off Russia and its national airline, and the European Union’s potentially impactful sanctions on aircraft parts, international air travel has been hit hard in multiple ways since Russian President Vladimir Putin ordered the attack.

Ukraine, Moldova, and part of Belarus have entirely closed their airspaces, resulting in the cancellation of flights to or from those countries, as well as prohibiting regular air traffic from passing through the closed space. The European Union Aviation Safety Agency (EASA) doubled its existing security alert on Friday, expanding the warning for airlines and other civilian operators from 100 nautical miles to 200 nautical miles of the Ukrainian border with Russia due to fears of “mid-range missiles penetrating into controlled airspace.” The EASA said on Thursday “operators should exercise extreme caution.”

“In particular, there is a risk of both intentional targeting and misidentification of civil aircraft,” the agency said. “The presence and possible use of a wide range of ground and airborne warfare systems poses a HIGH risk for civil flights operating at all altitudes and flight levels.”

As a result of the closures and military flights going dark, the airspace over Ukraine and its border with Russia is empty, according to flight tracking websites. An El Al flight bound for Toronto made a quick U-turn out of Ukrainian airspace early Thursday, the tracking website FlightRadar24 showed. A plane operated by LOT Polish Airlines bound for Kyiv turned around, as did Kyiv-bound flights operated by Air India and Aegean Airlines, according to Reuters.

There are real risks to flying over conflict zones — as illustrated by the 2014 downing of Malaysia Airlines Flight 17 over eastern Ukraine with a Russian-made missile, which killed 298 people. Western officials and a Dutch-led investigation said Russian President Vladimir Putin bears responsibility for the incident, an accusation that Putin denied.

The US government is expanding the area around Ukraine where American pilots are banned from flying, with the Federal Aviation Administration saying the no-fly region will “now cover the entire country of Ukraine, the entire country of Belarus, and a western portion of Russia,” in an expanded notice published on Thursday. The restrictions do not apply to military operations.

Prior to this update, the FAA has prohibited flying only in an eastern region of Ukraine since 2014, though no US airlines operate flights to or from Ukraine.

A US Level 4: Do Not Travel advisory has been in place since January, urging citizens to avoid traveling to Ukraine due to “ongoing tension along the border with Ukraine, the potential for harassment against US citizens, the embassy’s limited ability to assist US citizens in Russia,” as well as Covid-19 and other factors. The advisory was updated Thursday, telling Americans to not travel to the Ukraine “due to armed conflict and COVID-19,” and warning that the US government will be unable to evacuate American citizens.

Delta announced Friday that it will suspend the majority of its cooperation with Aeroflot, Russia’s biggest airline. The two airlines have had a codesharing agreement, which allows passengers booking through Delta to be put on an Aeroflot flight and vice versa. The agreement has been terminated effective immediately, according to Delta.

American Airlines is re-routing its Delhi-New York flight. United Airlines, however, continues to use Russian airspace for Delhi-Chicago and Delhi-Newark flights, according to flightradar24 and Reuters. United told CNN Business that there has been no impact to its flights.

Airline shares have fluctuated as news of the invasion develops, and ticket fares are expected to jump thanks to a rise in oil prices and potentially longer flight paths as a result of the multiple airspace closures.

Polish Prime Minister Mateusz Morawiecki announced on Friday that his country is preparing to close their airspace to Russian airlines. “I have ordered the preparation of a resolution of the council of ministers which will lead to the closure of the airspace over Poland to Russian airlines,” Morawiecki posted to Facebook.

In coordination with Poland, Czech Minister of Transport Martin Kupka tweeted Friday that, starting at midnight, Russian carriers would be banned from the Czech Republic’s airspace, as well. Kupka also announced that Czech Railways (CD) would be issuing free train tickets for any Ukrainian citizen wishing to evacuate the country on one of its trains. Free tickets are being provided to anyone with a Ukrainian passport.

The United Kingdom banned all Russian civilian aircraft from its airspace as part of a package of sanctions announced by Prime Minster Boris Johnson, which went into effect midnight Friday and are set to expire on May 23. The move triggered a response from Russia to do the same. All UK registered flights, as well as any aircraft owned, leased or operated by a UK-associated individual, are now banned from Russian airspace, according to a statement from Russia’s Federal Agency for Air Transport Friday.

Russian national airline Aeroflot currently operates direct flights between Moscow and London-Heathrow and Gatwick, according to its website.

British Airways, which runs three flights a week to Moscow, has suspended all service to Russia. “We apologize for the inconvenience but this is clearly a matter beyond our control,” British Airways said in a statement. “We are notifying customers on canceled services and are offering a full refund.” The airline also warned that some flights to Asia would be rerouted, causing potentially longer flights.

“The impact for us is not huge because right now we are only flying to a small number of destinations in Asia and we can reroute our flights,” Luis Gallego, CEO of IAG, the parent company of British Airways that also owns Iberia, Aer Lingus and Vueling, told Reuters.

Some commercial airlines, including Lufthansa and Air France, had already suspended flights to Ukraine earlier this week as tensions escalated. Virgin Atlantic is also suspending cargo flights between London and Shanghai while it considers rerouting those services, and Hungary-based Wizz Air relayed to customers that all flights to and from Ukraine would be suspended until further notice. The airline also announced efforts to evacuate Ukraine-based crew, their families and aircraft on Thursday.

Ukraine International Airlines (UIA) announced on Thursday the suspension of flights to and form Ukraine until Feb. 27 as a result of the closed airspace and current situation. According to the statement, UIA maintains a liaison with the Ministry of Foreign Affairs of Ukraine and the Ministry of Infrastructure of Ukraine. “Given the difficult situation in martial law, the airline draws attention to the possibility of forced delays and difficulties in feedback on service channels of communication with passengers and counts on understanding,” UIA told customers.

The European Union has agreed to ban the export of aircraft and spare parts necessary for maintenance of Russian fleets, said Ursula von der Leyen, president of the European Commission, on Friday after a six-hour meeting on a second wave of sanctions. Von der Leyen said the export ban would impact Russian connectivity and hit a key economic sector.

On top of the UK flight ban, Russia suspended domestic flights to and from several airports near its border with Ukraine, including Rostov-on-Don, Krasnodar and Stavropol, until March 2.

A notice to pilots said the move was “to provide safety” for civil flights.