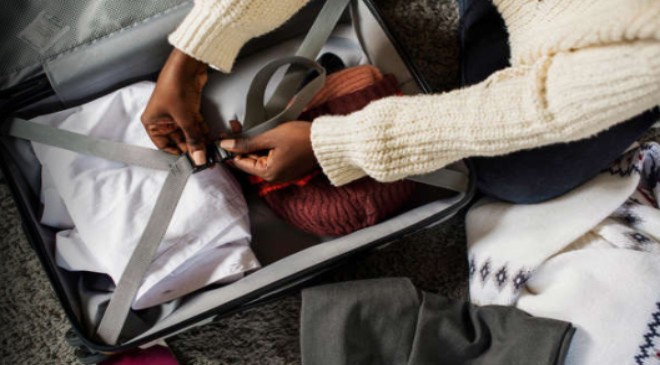 I know too well why Black women feel unsafe in America. The most insignificant parts of any other woman’s week become nexus events forcing Black women into a corner, where we decide if we should risk it all to save ourselves. Many of us cross oceans to find refuge because the resources meant to “help” us in our own country turn into weapons used against us.

When I was involuntarily admitted into a psych ward last year (my first time being hospitalized for anything), help looked like sleeping on a gurney for 48 hours in the middle of an ER, unshowered. It looked like being sent to bathe where someone smeared feces over the walls, and hospital staff insulting or simply ignoring any questions I asked about why I was treated this way during the most difficult episode of my life.

My story isn’t unique and is, sadly, the best-case situation. Black

I had no plans to stay within the prescribed rehabilitation planned for me when I was finally released from South Nassau Community Hospital. After barely getting out alive, there was no way I was continuing medical treatment in the States. Instead, I decided to move to Europe. patients are at a higher risk of being undertreated or dying as a result of racial bias in American hospitals. When it comes to mental health, Black women in the United States are less likely to seek therapy out of fear that they’d be indefinitely institutionalized and unfairly stigmatized. They also don’t believe doctors will offer treatments that provide significant improvements to their wellbeing.

My decision may seem dramatic, but the number of Black ex-pats moving to the continent is growing exponentially. Blaxit Tribe–Black Americans Who Want to Exit the U.S. & Move Abroad is one of the fastest-growing Facebook groups, with over 21,000 members either planning to leave the U.S. or who have already left. A Gallup poll showed that after the 2016 election, the percentage of poorer Americans planning their move out of America rose to 30%, higher than it was when Barack Obama became president.

I’m not trying to say that all Black Americans are poor, but I bring up these statistics to make this point: around 22% of the 21.4 million American women living in poverty in 2020 were Black. So this may mean that leaving the U.S. permanently or for a medical leave is not an option for many women who look like me.

“Travel can be a pivotal part of managing anyone’s mental health,” says Kenya Crawford, who is a licensed therapist and consultant on racial equity, LGBTQ folk, and mental health. However, she also adds that “travel has been positioned as [only] a luxury for most Black women who are attempting to survive in a capitalistic, racist, and misogynist society.”

My hospital stay was the final cylinder that fired my drive to leave America. After 10 years of being involved in social activism (e.g. Black Lives Matter protests), I doubted whether the political environment would ever change enough for me to thrive in this country.

Meanwhile, spending just two weeks outside of the U.S. lifted the strain I felt on my body and mind. Specifically, Southern Europe’s laid-back vibe felt like a home remedy for my anxiety. Most shops close all day Sundays. Coffee shops are packed with friends and co-workers talking for hours, in no rush to get back to work from their lunch breaks. You say “good morning” to bus drivers on your morning commute, and they say it back immediately with a smile!

Is there something about American culture that makes it worse than Europe for Black women’s mental health? Crawford thinks so. “American culture is built on white supremacy that aims to devalue the livelihood of anything and anyone who does not strive to assimilate. This expectation has led to a toxic environment that can be nearly impossible to survive.”

The gag is that white supremacy originated from the European colonization of land belonging to Black and Brown people. So why is stress shortening a Black woman’s

life expectancy by three years primarily in the United States? Look at what happened during my hospital stay for your answer. When it comes to the medical treatment of Black female patients, many American doctors use dehumanizing approaches that feel more like punishment than assistance. There’s an overreliance on numbing pain through medication, rather than considering how to change the circumstances that cause emotional pain.

As blessed as I’ve been to make it to Europe, I have to admit everything wasn’t pure bliss. I had to rebuild from the scraps remaining from my life in New York: new friends, a new job, a new language, and a new way of life. This required vulnerability, something I struggled with due to the trust issues I brought with me from America.

Moving from the U.S. didn’t shelter me from disappointment. We can be creatures of habit, even while living in a new environment. Many of us (i.e. Black women in Europe) were escaping some form of trauma, so even in so-called “safe spaces” the people I’ve met weren’t completely immune from reenacting the abuse they were used to back home.

Crawford had many things to say on this topic. ”I want to acknowledge that while traveling can be beneficial for one’s mental health, anti-Blackness, classism, and homophobia are global experiences. As a Black queer woman, I have to heavily research a country prior to visiting. I must ask myself, will I be safe? Which parts of my identity will be scrutinized, shamed, or even met with violence?

“This is absolutely a larger issue,” Crawford continues. “Moving across the world or booking a trip every once in a while is a bandage [on] a much larger problem. While I think it can be a larger supportive action, it doesn’t change the experience of Black women while in the States.”

Let Therapy Be Your North Star

You can escape a place, but you can’t escape your mind. By all means, plan your Blaxit/escape from the U.S. if you feel the need. But before you go, know there isn’t one city or country that’s perfect for every Black woman. Therapy will ultimately be your North Star when finding the best place for your emotional needs.

I couldn’t have made this trip if I hadn’t done shadow work on myself the year before. I’m one of the lucky Black women who found two clinicians of color who helped me understand the way internalized racism and misogynoir affected how I treated myself and others.

My biggest “aha moment” was that I wasn’t crazy. Life as a Black woman in America is objectively unsustainable and would make anyone feel insecure. My therapists went above and beyond providing a space for me to vent and coaching me around exploring remote work options.

I was raised in a Nigerian household by immigrants who believed in the American dream more than they believed the torture I went through navigating life as an American Black woman. They seemed to ask, “why isn’t she making the most out of this opportunity we gave her to live here instead of asking what about living here (in America) keeps her from getting the most opportunities?”

Therapy showed me how to be okay with them, or anyone, never fully understanding my very real experiences. And I learned that these doubts about the severity of those experiences shouldn’t impact my sense of self-worth. In this new continent, with this new attitude, and in this new role as my best advocate, I’m confident that I did what was necessary to save myself. I only pray more Black women will get the same opportunity before it’s too late.