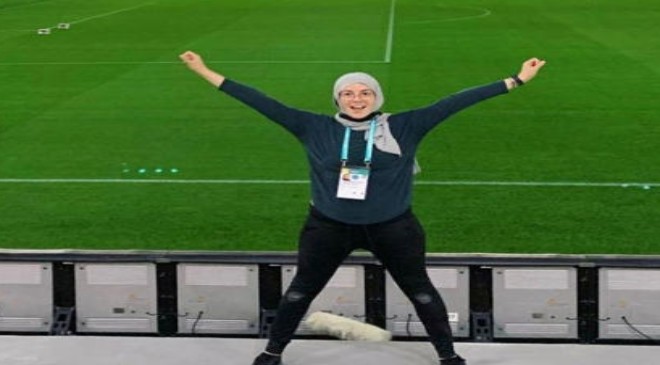 MEXICO CITY — Paola Schietekat longs to return to the Middle East, where she loved working — until a dream job in Qatar was followed by a nightmarish ordeal that made her flee the country.

“I couldn’t believe what had happened to me,” Schietekat told Noticias Telemundo, recounting the ordeal that has made international headlines.

Schietekat, who loves soccer, was working in Qatar for the Supreme Committee for Delivery and Legacy, an entity created by the country ahead of the 2022 FIFA World Cup, which will take place there in November.

In June, Schietekat, who’s an economist, said she was assaulted in a violent incident by an acquaintance and fellow Latino who also worked in Qatar.

“I was asleep, and when I hear a noise in the kitchen, I go to check. … He lunged at me, and we struggled a bit until he started hitting me really hard. I remember I ended up with bruises on my ribs, back, shoulder and the entire left side of my body. I was motionless for about 10 minutes,” she said.

Before leaving her, she said he yelled, “And don’t even think about telling anyone that I hit you.”

Schietekat went with a representative of the Mexican Consulate to report the incident to Qatari authorities, but instead, she said, it was turned into an investigation about her, with authorities at one point asking for a virginity test. “It was a very strong humiliation,” she said.

“My assailant lied, saying that we had a relationship, and, although I had the forensic evidence of the beatings and everything, they believed him and applied the crime of fornication to us in an extramarital relationship, for which we could be in jail for up to seven years,” she said. “But since I am Muslim, they can also give me 100 lashes. It’s crazy.”

Schietekat managed to leave Qatar with the help of Human Rights Watch and the World Cup body where she worked. The man she accused of attacking her has also left the country.

But in Mexico she has no peace, knowing that the trial continues.

“The worst thing would be to be convicted and not be able to return to the Middle East — that would end my professional future because I want to return and continue working in those countries. The truth is, I don’t want to think about that,” she said.

Rothna Begum, senior women’s rights researcher at Human Rights Watch, told Noticias Telemundo that Schietekat’s case brings together a “series of irregularities because she was interrogated in Arabic, without adequate translators. They also put her face to face with the aggressor, and they believed him so they filed charges.”

“They did not even do a formal investigation to corroborate the facts, and she is a foreign woman residing in the country that is organizing the World Cup this year,” Begum said. “It is very worrying.”

A Muslim who has lived in the region since she was 19, Schietekat said being a woman there is a constant challenge, but nothing had prepared her for what she experienced last year, including her country’s initial response.

Schietekat said that, according to her experience, the Mexican Consulate didn’t advise her or seek legal advice to warn her that her complaint could be used against her. She said she wasn’t offered translation services until hours after intense interrogations, and at that time, they only put her in contact with a translator by telephone.

“There is no protocol for the protection of victims of violence with a gender perspective in the Mexican Foreign Service,” she said.

Schietekat was 5 when she told her parents she didn’t want to do any more ballet; she only wanted to play soccer.

At 28, she still usually plays as an outside midfielder.

“The good thing about me is that I could shoot with both legs, so they always put me on the left side because I wasn’t afraid to kick from there,” she said with a smile.

In many ways, the Doha experience had been extraordinary for Schietekat: “I always wanted to do behavioral economics during the organization of a World Cup. I had prepared my whole life for such a moment.”

Qatar is one of the world’s most conservative countries, where sexual relations and childbirth outside of marriage are punishable by prison sentences and other sanctions, including physical ones.

Since FIFA announced in 2010 that the Arab country would host its biggest sporting event, human rights organizations and minority groups have denounced Qatar’s laws and existing sanctions.

In December, Nasser Al Khater, president of the Qatar World Cup organizing committee, stated that LGBTQ+ people who visit the country to attend matches should not feel insecure or threatened, but he hoped that “they do not make public displays of affection and respect the local culture.”

The criminal code of that country says the act of provoking or seducing a man to commit acts of “sodomy and immorality” is punishable by three years in prison. In addition, the contents of the sexually diverse community are censored in the international media.

In the case of women’s rights, Qatar stands out for restrictions on their freedoms and participation in public life.

“Qatari women are second-class citizens in their own country. They have to live under what are known as male guardianship laws and policies,” Begum, who led the Human Rights Watch report on the laws, said. “This means that in order to make a number of decisions about their lives, they need the permission of their guardian before they can engage in these activities.”

Women need permission from their male guardian for activities such as traveling abroad, studying, getting married, working, applying for a driver’s license and undergoing medical treatment, including issues of reproductive health, among other things.

Extramarital sex is classified as a crime in the penal code with penalties of up to seven years in prison, and if it involves Muslim people, it can include 100 lashes. In the case of adultery, it can be punished with stoning.

Additionally, foreign women who rely on their husbands or fathers as sponsors for their visas are subject to similar controls.

In a statement to Noticias Telemundo, Thayssa Plum, a spokesperson for FIFA, said it is following the matter closely.

“FIFA is aware of the situation involving Ms. Schietekat and it is of utmost importance to FIFA that, as a survivor of abuse, she receives all appropriate care and assistance,” the statement said. “FIFA took note of the support provided in that respect by the Supreme Committee for Delivery & Legacy and is in contact with its counterparts in Qatar.”

On Friday, as Schietekat’s story was making global headlines, Mexican Foreign Secretary Marcelo Ebrard met with Schietekat and made the services of the Foreign Ministry’s legal consultant available to her.

“Our best attorney will take care of defending her so all her rights as a Mexican citizen are respected,” Ebrard tweeted.

For now, Schietekat awaits the results of her next hearing, which is scheduled for March 6. She hopes that the Mexican Foreign Ministry will send a complaint to the Qatari Ministry of the Interior in order to resolve the case.