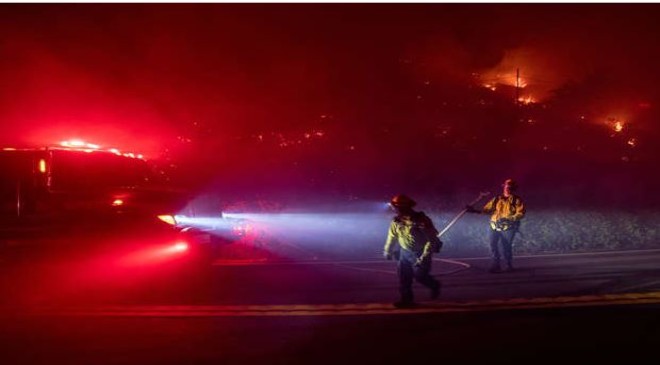 Awind-driven wildfire that started near the Sierra Nevada mountains in California on Wednesday had burned over 4,000 acres by Thursday night as almost 700 personnel worked to battle the blaze, authorities said.

The blaze, named the Airport Fire, began right outside the Eastern Sierra Regional Airport in Inyo County, California, around 1:30 p.m., according to CalFire. The fire spread quickly, doubling in size from 50 to 100 acres within 45 minutes. Thursday, the blaze was estimated to have scorched more than 6 square miles. Firefighters had so far kept it from harming small communities.

The Airport Fire is 20% contained, CalFire said Thursday night . The agency hasn’t identified what caused the blaze, but identified it as a vegetation fire.

CalFire said it expects the fire to be fully contained on Feb. 24.

The Owens Valley Radio Observatory, the White Mountain Research Center, and the small town of Big Pine were all evacuated Wednesday. The evacuations were lifted Thursday as firefighters began containing the blaze.

THIS NEWS IS DEVELOPING INTO THE EVENING: For an update later tonight, sign up for the Evening Briefing.

GIANT SEQUOIAS: Up to 19% of the world’s ‘irreplaceable’ giant sequoias lost to fire in about a year, study finds

The University of California’s White Mountain Research Center supports a wide range of scientific research and is known for earth science education.

“We were lucky to not sustain any damage to our facility. Though the fire was close, about 200 yards from our fence,” the center’s spokesperson Gaylene Kinzy said in an email to The Associated Press.

The Owens Valley Radio Observatory is owned by the California Institute of Technology and has large dish antennas used for radio astronomy and astrophysics research.

Caltech said in a statement that personnel on-site reported that a perimeter was established around buildings and the main threat to those structures had passed.

“Assessment of instrumentation and antennas in the field surrounding the main facility structures, however, is ongoing,” it said.

Bishop, population 3,800, is about 15 miles north of Big Pine, home to about 1,700 people in Inyo County. The arid valley lies thousands of feet below the peaks of the Sierra Nevada to the west.

The Airport Fire is the latest of many winter blazes to plague California this year.

Another fire less than a month ago closed a section of California’s famous Highway 1 as a fire burning near the Pacific Ocean prompted evacuations close to the state’s Big Sur region.