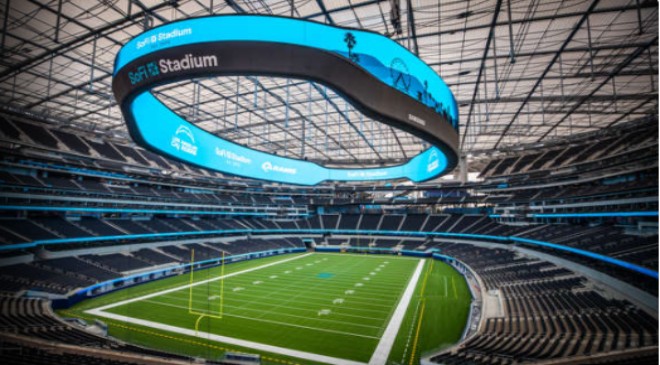 Located southwest of Los Angeles and adjacent to L.A. International Airport (LAX), Inglewood, California, is a historic community exuding new energy. Among its iconic mid-century buildings—60s-era indoor arena The Forum and the brutalist-style Inglewood City Hall—the city has long been home to old-school Soul Food, West African, New Orleans, and Mexican spots, not to mention public art, community spaces, and artisan markets well worth a trip out of downtown L.A. But there are now some unmissable newcomers to the city: The behemoth SoFi Arena will host this year’s Super Bowl after a period of construction that lasted from 2016 to late 2020. At cost a total of $5.5 billion, is the most expensive stadium ever built.

Perhaps unsurprisingly, it’s changing the area and sending rents and home prices skyrocketing. Beyond the stadium itself, the tree-lined landscape of SoFi’s grounds includes 25 acres of parks, green walkways, and bike paths. Hollywood Park, a 300-acre shopping center and residential development, will open in late 2022. A new Crenshaw/LAX Metro project slated to wrap up this year will also add eight new light-rail stations for direct access to Inglewood, Westchester, and Crenshaw from the airport (a venture that could reduce heavy traffic locals say the stadium has brought to the area).

As the stadium and Super Bowl put the city on the global stage, some local business owners are inviting new visitors to experience something more longstanding: the rich diversity of culture, art, and cuisine that has been here for decades.

“People have had a negative connotation of Inglewood and South Central L.A.,” says local Angela Johnson, co-owner of the Serving Spoon, a local Soul Food diner known for its huge Southern-style breakfast plates. For decades the city has been heavily segregated and subject to stereotypical portrayals in national media and pop culture. Johnson and other Inglewood business owners who are also Inglewood residents believe the new and increased visibility brought by the stadium can be a positive force for them.

“Inglewood has changed a lot in recent years, mainly for the best,” says Karolyn Plummer,  owner of Sweet Red Peach bake shop and Inglewood local, noting that she knows many people have sold their homes for a steep profit. “It does sometimes squeeze out the smaller businesses. One problem for us is the traffic when the games and the concerts are on,” Plummer says. “Sometimes our customers get deterred and delivery people refuse to come through.”

Rick Garzon, founder of community-based Residency Art Gallery, says he sees the change as a business opportunity: Residency has been tapped to join a designated Inglewood Local Businesses section of Hollywood Park’s retail space that will open this month. “Local businesses can definitely take advantage of the new development,” Garzon says. “And Inglewood will always be a great place to live.”

As nearby businesses hope to leverage the attention of SoFi and a home-turf Ram’s Super Bowl to shine brighter and attract day trippers seeking heritage-rich things to do, here’s how to see the longstanding community facets of Inglewood for a truly local-focused day in the area.

Getting to Inglewood, Los Angeles

Inglewood is best visited by car, but will soon be accessible by light rail—another new development that will continue to transform the area. Located just about 10 minutes from LAX, it’s easily accessible via the 405 and 105 freeways. Visitors in late summer 2022 will also be able to use the new Crenshaw/LAX transit line for easy subway access to Inglewood.

Start your day off at one of the longest-running Black-owned establishments in Inglewood: The Serving Spoon. It’s an iconic neighborhood haunt worth the 45 minutes it usually takes to grab a table. Order up crispy-creamy french toast, cheesy grits, chicken and waffles, catfish, or melt-in-your-mouth oxtail. This Inglewood staple is celebrating its 39th anniversary in 2022.

For lunch, cross culinary continents to Veronica’s Kitchen for Nigerian food. Order the egusi soup, a peppery stew of collard greens and ground pumpkin seeds that you’ll eat with your hands; the soup arrives with fufu, a spongy cassava dough meant to be shaped into a scoop for doing so. Locals also order the jollof rice—tomato-based rice served with plantains. Or tuck in a napkin—or several—at Dulan’s Soul Food Kitchen. Opened in 1975, Dulan’s covers the classics, especially fried chicken, oxtails, and smothered pork chops that make the restaurant a neighborhood darling. For sides, the baked mac and cheese or tangy candied yams are a favorite.

Find authentic Nayarit-style Mexican seafood at Coni’Seafood. The star of the menu is pescado zarandeado, an entire grilled snook fish paired with spicy guacamole, red onions, and cucumbers—a famously tricky dish to prepare. Shrimp is also a highlight; it’s ordered fried, steamed, diced, or smothered in jalapeño and chipotle-flecked oozy cheese. Other standouts include the ceviche marinero and marlin tacos.

If you need a caffeine kick at any point of the day, try Sip & Sonder in downtown Inglewood. The creative hub and events space for the local community serves coffees from Black-owned roasters. Try the creamy and fragrant golden milk turmeric latte—packed with antioxidants and a sunny hue from the spices—or recharge with an invigorating cold brew.

Dessert is sweetest at the Sweet Red Peach, a local family-owned bakery serving up Southern treats such as peach cobbler, sweet potato pie, and red-velvet cupcakes. Everything is baked from scratch, and there’s a rotating menu of different flavors and cakes on any given day. As it’s just across the street from SoFi Stadium, they’ll be making Rams-themed cupcakes and more for the Super Bowl this year.

Where to see art in Inglewood

Black art is a cornerstone of the city of Inglewood thanks to the efforts of locals, including gallery director Garzon of Residency Art Gallery, which opened in 2016. “There weren’t any Black-owned commercial galleries in Los Angeles in 2016,” Garzon says, so he opened one in his neighborhood to highlight art from Black and Brown local and out-of-state artists. The Creative House is another gallery option. This nonprofit serves under-represented communities by providing arts education and hosting various events—from sculpt-and-sip events, to spoken-word performances, and children’s classes.

One of the world’s largest collections of African American art and artifacts is also heading to SoFi Stadium on February 23rd to celebrate Black History Month: The Kinsey African American Art & History Collection is a Black-owned private collection of fine art and historical relics documenting Black excellence in the United States from the 16th century to the modern-day (the 100,000 square-foot …. is on display until April 30th).

To support the performing arts, start at the historic Miracle Inglewood on Market Street in downtown. Initially opened in 1937 as the Ritz Theatre, it was revived in 2018 and remains one of the area’s top spots for musical theater, local bands, and panel discussions.

What to do beyond SoFi Stadium

You can’t leave Inglewood without snapping a selfie with the giant donut at Randy’s Donuts. Open since 1952, it’s one of the most well-known sites in the city (thanks to the 32-foot donut sculpture crowning its rooftop) and not to mention, one of the most beloved donut shops in the country (known for its fluffy buttermilk donuts and tangy apple fritters). Another photo-op spot is The Dunes, the real-life apartment complex heavily featured as HBO character Issa Dee’s home in the long-running series Insecure.

If you’re visiting on a Sunday, stop by the Angel City Market, a shopping pop-up featuring local vendors selling all kinds of goodies: clothing, jewelry, plants, crystals, and more. Running along Inglewood Avenue just east of LAX, the market features new themes for each event—from Galentine’s Day to Superbowl offerings and more. There are plenty of local food and drink vendors, a live DJ, kid activities, outdoor games, shopping—and admission is just $1 at the door (or free if you register in advance online).

As the home of two NFL football teams, the Los Angeles Rams and Los Angeles Chargers, SoFi Stadium is a natural place to begin or end any day in Inglewood, but you should absolutely include with it the magic of The Forum—a historic 20,000-seat venue built in 1967 that features iconic Roman-style columns. Less than a mile from So-Fi, the Forum was renovated and reopened in 2014; it earned the Conservancy Preservation Award the same year for its acoustics (making it the perfect place for a live-music event).

Although significant changes are now a constant for the city, these locally beloved spots are committed to preserving Inglewood’s culture and its culinary legacy, for years to come.