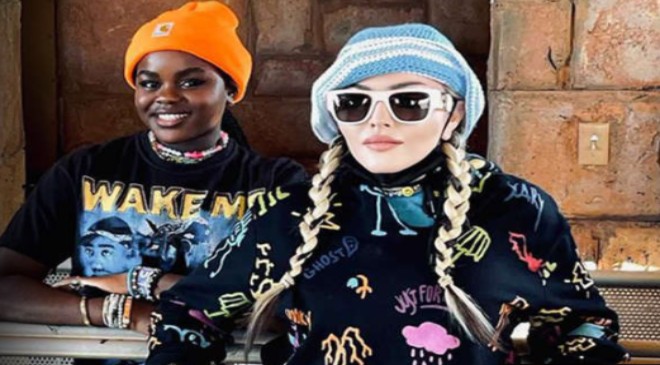 Madonna is continuing to celebrate her daughter Mercy James’ sweet 16!

The “Material Girl’ singer, 63, posted a fun clip to her Instagram on Monday in honor of the occasion, showing the trip that she, Mercy, son David Banda and boyfriend Ahlamalik Williams took to Six Flags Magic Mountain amusement park in California.

The snippet started out set to Madonna’s 2008 hit “4 Minutes” while the entertainer was seen going incognito, in a blue and white knit cap, large white sunglasses and a colorfully patterned black sweatsuit.

Birthday girl Mercy was wearing a shirt featuring Tupac Shakur and the phrase “Wake Me” — perhaps a gift after the mother-daughter pair recently visited a Tupac exhibit at L.A. Live — and she remarked on how she was feeling about turning 16, saying she’s “feeling different, she’s feeling new, renewed, goofy and quirky.”

After announcing that they were there for the birthday celebration, the group tackled one of the impossibly tall rollercoasters the park is known for, with Madonna later remarking, “I can’t take this anymore! I pay to be abused.”

Another amusing interlude featured Madonna briefly whimpering to the camera in between more rides, before the group was seen laughing at a photo that was taken of them while plunging into the water on the log flume.

At the very end, David was seen with his arm around his mother, saying “I’ll always love you” before giving her a kiss.

The trip was the latest stop in a series of events celebrating Mercy’s latest trip around the sun, which included not only their Sunday visit to the Tupac Shakur Experience, but also a surprise party earlier in the weekend.

On Saturday, Madonna shared a video of the surprise she had for her daughter. In the clip, Mercy walked into a room and shouted, “Oh my God!” before seeing her bedroom filled with lights and balloons. She was then greeted with hugs and kisses from her younger sisters, twins Stella and Estere, 9.

The “Like a Virgin” artist paired the video with several photos of Mercy over the years.