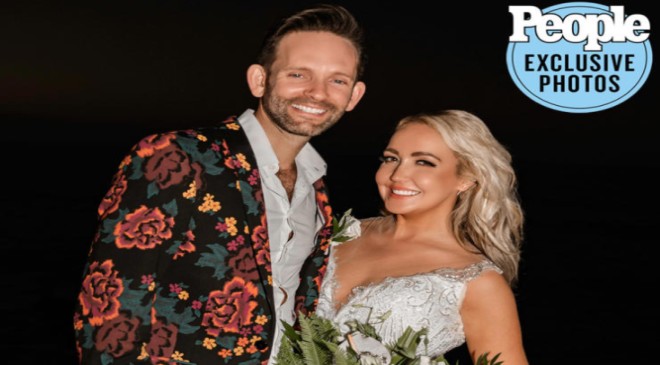 Meghan Linsey and Tyler Cain have officially tied the knot!

The Voice alum, 36, and her longtime boyfriend, 39, eloped Sunday in an exchange of vows at Ironwoods Beach in Lahaina on Maui, Hawaii, where Cain’s parents honeymooned after their marriage, PEOPLE confirms. (Cain’s late father had also been stationed there while serving on the U.S.S. Ironwood as a member of the Coast Guard.)

The event, planned by Simply Eloped, came together in a week after the couple decided not to wait any longer to tie the knot. “It was so easy. We decided to elope one week before our big day, so I did a Google search and found them,” Linsey says. “They took care of every detail, from permit for the location, flowers, officiant, photographer, videographer… literally everything. It was so nice because I didn’t have to really do much except pick the location and flowers I wanted!”

“We are just so excited to finally be married,” Cain tells PEOPLE. “We’ve been together for 10 years in March and we are more in love now than we’ve ever been. We just knew if we don’t do it now, then when? With COVID, it’s so hard to know when it would be a good time to have a large gathering. We love our family and friends so much and don’t want to put anyone at risk.”

The couple were wed by Kuya Alamodin, whom Linsey says is “is ‘aloha’ in human form. Just the sweetest human with the kindest demeanor.”

Linsey wore a custom Olia Zavozina gown, which was designed two years ago after the couple first got engaged. Getting the right fit, she tells PEOPLE, was “really important” to her.

“I wanted something that would hug my curves but still look elegant,” the singer-songwriter said. “The beading and button details on the back are beautiful and the train is miles long, which I love. Olia is the sweetest human and so insanely talented. She made my dress two years ago and has held on to it all this time!”

In addition to her gown as her something new, Linsey incorporated a rhinestone pin her mother gave her from her jewelry box as her something old, a bird pin from her mother-in-law as her something borrowed, and a jewelry from her a friend as her something blue. “My best friend Julie, who’s like a sister to me, gave me her late mother’s necklace. I plan to add all the jewelry to my bouquet,” she says. “It was important to me to include elements of the important women in my life into the ceremony, especially since were eloping and they wouldn’t be there.”

Linsey took care of her tresses before she left the mainland. “I actually stopped in at Tracey Shepherd’s salon Lotus + June in Oklahoma City just to have her do my custom color and extensions because I love her work so much,” she tells PEOPLE. Linsey’s bridal look was completed by the pros at Maui Makeup Artistry with hair by Danielle Epolite and makeup by Colie Lennox.

Meanwhile, Cain wore a Twisted Tailor suit for the occasion. Engraved into the inside of his custom wedding ring, made by Manly Bands, is a sound wave from the duo’s song “Nowhere With You,” released in March 2021.

At the ceremony, a ukulele player performed an instrumental version of the song “Has Anybody Ever Told You,” written by Cain. The song appeared on Ashley Monroe’s Grammy-nominated album The Blade in 2015, and Maren Morris and Ryan Hurd used it for their own first dance at their 2018 wedding.

Linsey told PEOPLE that the song has always been one of her favorites. The couple have released an acoustic version of the song, premiering on PEOPLE with their marriage news..

“We decided to release an acoustic duet version because it’s such a special song,” Cain said. “It’s like our song to each other for our wedding day.”

For their romantic getaway, Linsey and Cain stayed at the Wailea Beach Resort Marriott, where they enjoyed an incredible oceanfront view and indulged in a couple’s spa day following their nuptials.

After meeting at Jay DeMarcus from Rascal Flatts house almost a decade ago — “Tyler was working on a record for James Otto and I came in to Jay’s recording studio sing a duet with James. I was a little sick that day, so Tyler asked me to come back to his studio the next week to finish it. We started hanging out a lot after that” —  Linsey and Cain got engaged while shooting a music video in Alaska in June 2019. The couple originally planned their wedding for April 2020, but pushed it back after the pandemic struck weeks before the big day.

At the same time, Cain’s father — who died at the end of last year — and Linsey’s mother were battling cancer. A short time later, a tree crashed through their recording studio and damaged their gear while storms blew through Nashville.

“It just wasn’t a good time to get married,” Linsey tells PEOPLE. “We tried picking a few more dates, and every time we just didn’t feel good about having a large gathering in the midst of COVID.”

So the couple eloped, which Linsey calls “the perfect solution” to their problem. “We both love to travel and Maui seems like the perfect place to get married,” she says. “I also think it’s cute that we got engaged in Alaska and married in Hawaii!”

As they look ahead to the future, the couple are looking forward to continuing to strengthen their bond.

“It really comes down to the way we elevate each other,” Cain tells PEOPLE. “We root for each other and compliment each other so well. We both love to travel and make music together. We’re best friends.”

Adds Linsey, “We allow each other space to be our own person. I think that’s so important. We could live without one another, but we would never want to. Every day we choose each other. Also, we laugh — a lot.”