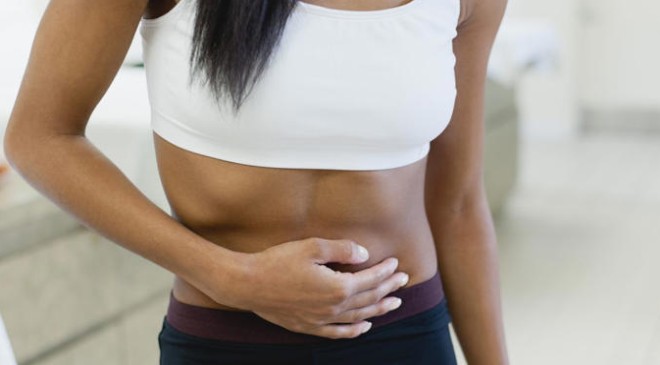 Going through stomach issues that won’t quit, like bloating and diarrhea and abdominal pain, is enough to send anyone straight to Dr. Google to try to self-diagnose what is going on. While you’re unlikely to get a definitive answer in all that searching (because, hello, they can be signs of lots of GI illnesses!), you may come across a condition called SIBO in your research, which involves symptoms like the ones mentioned.

Asking for a friend here: What is SIBO? In short, it’s a lesser-known gastrointestinal illness that isn’t in the spotlight as much as conditions like irritable bowel syndrome (IBS) or acid reflux. Still, SIBO happens to a lot of people—more often than most realize.

Here’s where things get tricky. There are a lot of questions that even doctors can’t answer about SIBO—and SIBO symptoms can be easily confused with those of other GI illnesses. So, arriving at a SIBO diagnosis can be tricky—especially if your doctor doesn’t think to look for it. Even when you are diagnosed, it can even be tough to figure out why you in particular are dealing with a case of SIBO right now.

“We don’t always know what causes it,” says Lea Ann Chen, MD, assistant professor of medicine at Rutgers Robert Wood Johnson Medical School and director of Inflammatory Bowel Disease Translational Research for the Division of Gastroenterology and Hepatology. That said, there is a test for SIBO, so you won’t be left wondering if you have this condition or something else forever.

There’s so much more to learn about this confusing condition, though. Ahead, answers to all of your SIBO-related questions.

Read More : This Common Toothpaste Ingredient Isn’t Great for Your Gut Health, According to New Research

What exactly is SIBO—and what causes it?

SIBO happens when there’s an unusual increase in the overall population of bacteria in your small intestine, especially in types of bacteria that aren’t normally found in that area of your GI tract, according to the Mayo Clinic.

SIBO usually happens when someone has surgery or a disease that slows down the movement of food and waste in the GI tract, explains Ashkan Farhadi, MD, a gastroenterologist at MemorialCare Orange Coast Medical Center in Fountain Valley, California. This can allow certain bacteria that aren’t welcome in high numbers in the small intestine to thrive there and lead to uncomfortable symptoms.

It’s not entirely clear why some people develop SIBO and others don’t, but there are a few things that can raise your risk of the condition. Those include a change in your gut motility (how fast stuff moves through the area) from medications like narcotics, diabetes, and decreased gut acid from the use of acid-reducing medications like proton pump inhibitors, says Richa Shukla, MD, assistant professor of medicine, gastroenterology at the Baylor College of Medicine. SIBO can also be a complication of having gastrointestinal surgery, Dr. Chen adds.

SIBO has a lot of overlapping symptoms with IBS, and some people with irritable bowel syndrome also have SIBO. One study estimates that anywhere from 4 to 78 percent of IBS patients have SIBO, too. “IBS is challenging in that there really is no diagnostic test for it,” Dr. Chen says. “That makes it very easy to confuse IBS with SIBO, and there is some overlap.”

What are the symptoms of SIBO to look out for?

The symptoms of SIBO can be a little vague and easily confused with other GI issues. Here’s a breakdown, according to the Mayo Clinic:

Great Q! “Oftentimes, people with SIBO will have chronic diarrhea,” Dr. Chen says. You may also have “oily or greasy stool” due to issues with your body being able to properly absorb fat, says Andrew Shreiner, MD, section chief of gastroenterology at Spectrum Health.

Another potential SIBO clue? “Belching is associated with SIBO,” he notes. (But the condition shouldn’t impact your breath.)

Read More : 85 Percent of People With Prediabetes Have This in Common, CDC Says

Wait, how do I know if I have SIBO or IBS?

It can be tough, TBH. In general, the Mayo Clinic states that the following may be symptoms of IBS:

“It can be hard to tell the difference,” Dr. Chen says. “There are a lot of overlapping symptoms.” Further complicating things: You can have IBS and SIBO at the same time, Dr. Shreiner says. Ultimately, see your doctor or a gastroenterologist to get a proper diagnosis.

Is there a test I can take to tell if I have SIBO?

If your doctor suspects you might have SIBO, they’ll give you a test for it. There are two options:

How is SIBO treated?

If you do, in fact, have SIBO, you’ll be treated with antibiotics, usually rifaximin, Dr. Shukla says. Unfortunately, that doesn’t always do the trick. “About 40 percent of patients may have persistent symptoms after the first course of antibiotics and will require a second course,” Dr. Shukla says.

If you’re still struggling with symptoms after that, your doctor will probably ask you to change up your medications and diet to see if that makes a difference, Dr. Farhadi says.

What happens if SIBO is left untreated?

You’re not going to feel so hot. “It would very likely result in continued symptoms,” Dr. Chen says. Read: You’ll have a lot more diarrhea, gas, and bloating in your future.

It can even lead to health issues for you. “Untreated SIBO can lead to nutritional problems and possibly other health problems linked to malnutrition or the activity of gut microbes,” Dr. Shreiner says

What foods should I avoid if I have SIBO?

Dr. Farhadi warns against eating “foods that are really sugary.” So, pastries, desserts, and candy should be pushed to the side. Ditto for foods packed with carbs (which convert to sugar in your body) and alcohol. “They encourage SIBO. The bacteria feed off of [sugar],” Dr. Farhadi says, before warning, “watch what you eat.” (A gastroenterologist and/or nutritionist with experience helping people with SIBO can help guide you as you make dietary changes.)

You may have heard that probiotics are actually bad when you have SIBO, but Dr. Farhadi says that’s not totally accurate.“Probiotics are your friend,” he says. “They can replace the bad bacteria with good bacteria.” People with SIBO who took probiotics had a “significantly higher” rate of recovering from the condition than those who didn’t take probiotics, per one meta-analysis published in the Journal of Clinical Gastroenterology.

The bottom line: If you think you might be struggling with SIBO and are dealing with several of the symptoms, it’s worth talking to your doctor to find out for sure so you can get on a course of treatment.