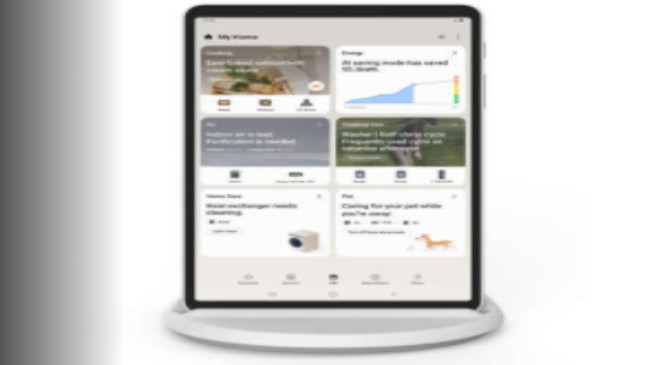 Samsung introduced its first standalone SmartThings smart home controller at its CES 2022 keynote this week. The Samsung Home Hub is designed to be a central place for a household to control and monitor their smart home without having to buy a $4,000 smart fridge.

The portable, 8.4-inch touchscreen tablet has Samsung’s Bixby voice assistant built-in and will use AI to anticipate what you might need (we’ll see how that pans out). The Home Hub sits vertically in a charging dock and has two microphones and two speakers for hearing notifications and giving voice commands. Based on the images the company has shared so far, it appears to run Android.

Samsung says at launch, the Home Hub will “be able to connect to every product within the SmartThings ecosystem,” with integrations for other devices, such as lights and door locks coming soon. There was no specific mention of this being a SmartThings software hub itself (Samsung has said it is integrating SmartThings hub software into many of its smart appliances), but it’s hard to imagine it won’t be. There’s no pricing available or a US release date, but it is scheduled to launch in Korea in March and globally after that.

There are still a lot of things we want to know about this: Will Bixby be the only voice assistant option? Is the AI thing going to be super annoying? But, at first glance, this looks a lot like the smart home controller we wish Apple, Amazon, or Google would make.

The transition from smartphone control of the smart home to voice control has not been a seamless one. There are many times when it’s easier to tap on a screen to turn on the lights or lock the back door than it is to raise your voice, and a simple, easily accessible interface to do this is something the smart home still needs.

If we’re going to drag members of our households into the smart home, it’s got to be easier for them to control it

Smart displays from Google and Amazon have largely failed to provide a usable dashboard for this type of control, instead requiring multiple swipes and taps to get to what you need. These displays also try to be multitaskers in the home, part calendar, part radio, part TV, part smart home device, partly failing to do well most of what they attempt.

Case in point, Amazon’s new Echo Show 15, which I thought would be the solution I’d been looking for to control my smart home; since I took down the aging iPad Mini I had installed in my wall. (Its screen finally gave up the ghost — turns out being permanently plugged in and sitting vertically on my wall for four years was not good for it.)

Sadly, the software on the Show 15 doesn’t live up to the promise of the hardware, and while it looks fantastic, its limited smart home controller interface means it just won’t work for my home.

What I, and many like me, want is a dedicated smart home dashboard, something that has shortcuts to control devices, trigger scenes, and view live camera feeds. That’s not to say there isn’t room for Echo Shows and Google Nest Hubs that do part of what they’re supposed to do really well. But a dedicated smart home interface mounted on a wall or set up on a counter is what is needed.

There have been a few attempts at solving this problem — the touchscreen Brilliant Control Panel that replaces your existing light switches is an innovative solution that takes advantage of a house’s existing wiring. But installing that system in every room will set you back a pretty penny, and the screen is much smaller than a tablet, making it less intuitive for all users.

What I like about Samsung’s Home Hub so far is its size, its orientation, and its potential portability. A vertical screen is actually more useful for smart home control than a horizontal one, as you can fit more icons on the screen that way and ideally have quick access to more controls. The stand for the Samsung Home Hub looks like it could also hold the screen horizontally if you preferred, although it probably will only charge in the vertical position, and Samsung has said it can be picked up and moved around when required.

The other thing it looks like they’ve done right here is make it a shared device. The problem with shoehorning existing tablets like the iPad into the role of a smart home dashboard is they’re designed as personal devices. A dedicated tablet for the home needs different software and a different approach.

I’ve used the Samsung Family Hub smart fridge, and the Home Hub interface looks similar. Both largely resemble a blown-up version of Samsung’s SmartThings smartphone app. There’s a Favorites home screen with your favorite devices on it, a Devices tab for all your gadgets, and a Life tab where you’ll find Samsung’s connected services — such as Cooking, Clothing Care, Energy, Pet, Air and Home Care Wizard. That last one monitors your Samsung smart appliances and tells you when you need a new water filter for your fridge, as well as offers troubleshooting tips when needed.

It’s not the smart home dashboard of my dreams, but it is a step in the right direction: a dedicated device for controlling the many aspects of your smart home that doesn’t attempt to do unnecessary party tricks but gives you and your household an easy way to turn the home on and off.Smart displays from Google and Amazon have failed to provide a usable smart home interface

Speaking of Samsung’s connected services, the SmartThings Energy service, which monitors the power usage of all compatible connected devices and recommends ways for you to save energy based on usage patterns, is being expanded to include more products and services. Samsung also announced partnerships earlier this year that enable real-time monitoring of whole-home energy consumption in the SmartThings App. This type of integration should allow homeowners to set up automations based on energy costs or demand response events.

During its CES keynote, Samsung also announced that it’s a founding member of the newly minted Home Connectivity Alliance (HCA). Founded in September 2021, the HCA’s main goal is creating “Cloud to cloud interoperability across brands,” according to its website. At the keynote, Katherine Shin from Trane Technologies (an HVAC manufacturer that is also a member) said that the HCA is a global coalition of smart home appliance manufacturers focused on full interoperability between products. Interoperability has been a big problem in the home appliance space, as upgrade cycles for large appliances are much slower than for speakers and light bulbs. Members of HCA include GE Appliances, Electrolux, and Haier.

Samsung is also part of Matter, a new smart home standard with similar goals. How this initiative will fit in with Matter is unclear at this stage. Matter is a local protocol, with devices communicating primarily over a local network while still allowing IP access to connect to the internet. This new Alliance appears to be focused on expanding connectivity between cloud-based services. This is something Samsung has been pursuing more aggressively since it started to transition its SmartThings platform from a hardware-based smart home hub to a software-based service.