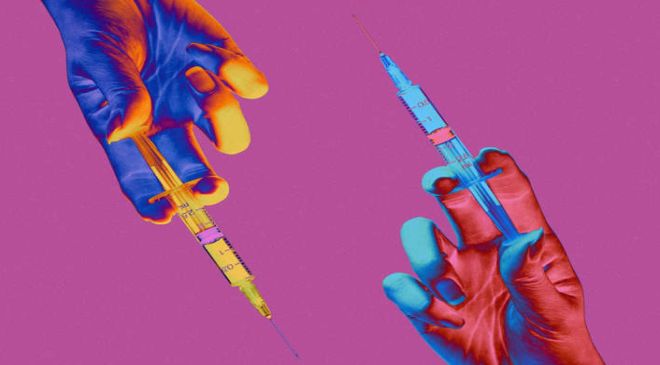 The U.S. flu season has begun this winter after taking last year off: Hospitalizations are rising and two child deaths have been reported.

The 2020-2021 flu season – the first new season since the start of the COVID-19 pandemic – was the lowest in decades. Some major cities saw zero cases. Experts said COVID-19 prevention measures such as school closures, physical distancing, masks and canceled travel resulted in less spread of the influenza virus.

But a year later the annual wave of flu infections is back at a much stronger rate.

This is setting itself up to be more of a normal flu season,” said Lynnette Brammer, who tracks flu-like illnesses for the U.S. Centers for Disease Control and Prevention.

The childhood deaths, Brammer said, are “unfortunately what we would expect when flu activity picks up. It’s a sad reminder of how severe flu can be.”

During last year’s unusually light flu season, one child died. In contrast, 199 children died from flu two years ago, and 144 the year before that.

► California became the first state to record more than 5 million known coronavirus infections, according to the state dashboard Tuesday, which was delayed by the holiday weekend. It’s unclear how many of the new cases were attributed to the omicron variant.

► 4,765 US flights were delayed and 1,132 flights canceled Tuesday because of a mix of COVID-19 and weather-related problems, according to FlightAware, which tracks real-time flight statuses.

► Apple is temporarily not allowing customers to shop inside its 16 retail stores in New York City as COVID-19 cases surge. Instead, customers can pick up orders from online. Within the past week, the tech company temporarily shut down stores in Miami-Dade County and Palm Beach, Florida; two malls in Atlanta; Houston; and one each in Ohio, New Hampshire and Montreal.

► The CDC is investigating Royal Caribbean’s Odyssey of the Seas ship as it continues to sail with more than 50 cases of COVID-19 onboard.

► About two dozen sailors on a U.S. Navy warship – roughly 25% of the crew – have tested positive for COVID-19, keeping the ship sidelined in port at Naval Station Guantanamo Bay in Cuba Monday, according to U.S. defense officials.

Keep refreshing this page for the latest news. Want more? Sign up for USA TODAY’s free Coronavirus Watch newsletter to receive updates directly to your inbox and join our Facebook group.

The U.S. on Monday reported more than half a million new COVID-19 cases – vastly worse than any other single day of the entire pandemic.

Monday’s tally of more than 500,000 new cases was higher than the nation’s previous record of more than 303,000, a USA TODAY analysis of Johns Hopkins University data shows. The apparent spike likely represents some cases backlogged over the Christmas holiday, but it also reflects part of the surge of the highly contagious omicron strain.

The world on Monday also reported its worst week ever for COVID-19 cases – 5.9 million – the USA TODAY analysis showed. The previous record of about 5.79 million cases was set in April.

Several states, including Washington and Georgia, recorded a record number of COVID-19 cases on Tuesday.

King County in Washington, which encompasses Seattle, has seen a 213% increase in COVID-19 infections in the past seven days. In Georgia, as of Tuesday afternoon, 25 Atlanta-area emergency rooms were turning away ambulances, while only six ERs at hospitals caring for adults were receiving them, according to state data.

The U.S. numbers come after the Centers for Disease Control and Prevention on Monday cut the amount of time it recommends people should isolate after testing positive for COVID-19 and quarantine after coming into contact with someone who tests positive.

COVID-19 antigen tests may have “reduced sensitivity” in detecting the omicron variant, the Food and Drug Administration cautioned Tuesday.

The warning followed preliminary research findings from the National Institutes of Health’s (NIH) RADx program, which studied the performance of antigen tests with patient samples that have the omicron variant.

“Early data suggests that antigen tests do detect the omicron variant but may have reduced sensitivity,” the FDA wrote Tuesday.

Antigen tests are generally less sensitive and less likely to pick up very early infections compared to molecular tests, according to the FDA. The agency recommends those who test negative with an antigen test, but still suspect they have COVID-19, should take a molecular test as well.

Abbott, a medical device company that makes the widely-used BinaxNOW COVID-19 antigen test, said in a statement its data from customer use has not shown any change in test performance.

“We’ve conducted lab analyses and tests on the omicron variant from live virus, including from the first U.S. omicron case, and BinaxNOW detected the virus in all tests we performed at equivalent sensitivity as other variants,” the statement reads.

The city was ramping up testing and changing its quarantine policy to allow asymptomatic students who test negative for the coronavirus to stay in school.

New York state will provide the city’s public schools with 2 million at-home test kits so that tests can be sent home with students if a classmate tests positive, de Blasio said, and students who test negative won’t have to quarantine.

“This is how we are going to look at schools from this point on, keep them safe and keep them open,” de Blasio said. “So long as they’re asymptomatic, and so long as they test negative, they keep coming to school.”

New York City’s public school system, the nation’s largest with about a million students, was one of the first in the nation to reopen to in-person learning after the pandemic hit in 2020, but frequent school or classroom closings because of COVID-19 cases proved disruptive.

In addition to distributing at-home tests, the city will double the number of random COVID-19 tests it conducts in schools and will include vaccinated as well as unvaccinated students, the mayor said.

Fauci: US should consider vaccine mandate for domestic air travel

Fauci, President Joe Biden’s chief science adviser on the pandemic response, said such a mandate might drive up the nation’s lagging vaccination rate as well as confer stronger protection on flights. Federal regulations require all those age 2 and older to wear a mask on flights.

“When you make vaccination a requirement, that’s another incentive to get more people vaccinated,” Fauci told the network. “If you want to do that with domestic flights, I think that’s something that seriously should be considered.”

The Texas state health department has run out of a key treatment to fight the omicron COVID-19 variant, which now makes up 90% of the virus cases in the state.

On Monday, the Texas Department of State Health Services announced that its regional infusion centers in Austin, El Paso, Fort Worth, San Antonio and The Woodlands have run out of the monoclonal antibody sotrovimab.

The Centers for Disease Control and Prevention on Monday cut the amount of time it recommends people should isolate after testing positive for COVID-19 and quarantine after coming into contact with someone who tests positive.

The new recommendations are for:

Isolation: For those who are infected with COVID-19, isolation starts the day a person tests positive. The CDC now recommends isolating for five days and going back to normal activities if a person is not showing any symptoms after that period. Previously, the isolation period was 10 days.

Quarantine: For those who come in close contact with someone who tests positive for COVID-19.  The CDC is now recommending those who are vaccinated and received a booster shot can skip quarantining if they wear a face mask for at least 10 days. If a person is vaccinated and has not gotten a booster, or if they are partly vaccinated or not vaccinated at all, the CDC recommends a five-day quarantine, then wearing a mask in public for an additional five days.

Previously, the CDC recommended unvaccinated individuals should quarantine for 10 days and those who were vaccinated could skip a quarantine.

Tested positive for COVID during the holidays? Here’s what to do.

Testing positive for COVID-19 starts a confusing, disruptive and at times frightening process – one that millions of Americans will likely go through in the coming week.

First, you need to isolate. That’s a more intense version of quarantining – it means cutting off contact with other people as much as possible so you reduce the chance of infecting them. This also means forgoing travel, not going to work and even limiting contact with people in your own household who aren’t infected.

The CDC says isolating is a necessary step whether you’re vaccinated or unvaccinated, and whether you have symptoms or feel fine.

Everyone who tests positive for COVID-19 should monitor their symptoms. And people who are unvaccinated or at high risk for severe disease should be extra-vigilant for symptoms that might require emergency care. Call your doctor for early treatment options.

How long should you isolate? How long will I be contagious? What if you are in close contact with someone who tested positive?