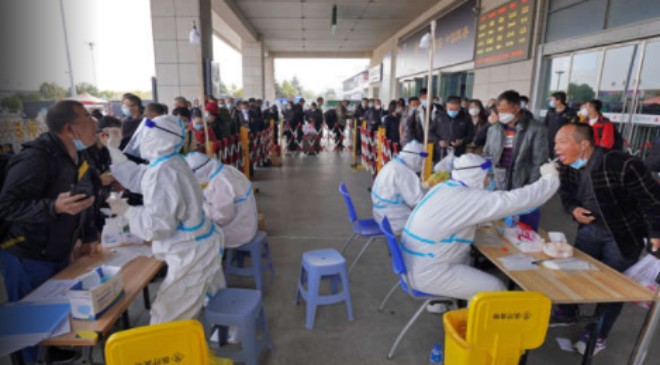 Chinese state media appeared to troll the United States on Monday, publishing dual articles referencing the reported low rates of COVID-19 in China versus rampaging cases of the Omicron variant seen in the U.S.

The articles were published by Xinhua News Agency, China’s official state-run press outlet. Often accused of being a channel of disinformation for the Chinese Communist Party (CCP), the agency is often criticized for publishing reported false facts.

Despite Omicron affecting mass portions of the United States, Europe and areas of Asia, the Xinhua News Agency stated that China had only seen 182 new cases of COVID on Monday. This is despite the country having a reported population of over 1.4 billion.

The article on Chinese cases also stated that “no new suspected cases and new deaths from COVID-19 were reported on the day.”

However, an additional article from Xinhua News Agency, published just hours earlier, focused on the significant issues plaguing the United States as the nation struggles to contain the spread of Omicron. The article’s title referenced “record-high daily COVID-19 infections” in the U.S. since the beginning of 2021.

“The new Omicron variant has driven a winter surge in COVID-19 cases, hospitalizations and deaths across the United States,” the article began. The piece also pointed to the 176,000 new daily cases being reported by the U.S. Centers for Disease Control and Prevention (CDC).

“Currently, the United States is witnessing about 1,200 new deaths from COVID-19 each day, CDC data showed,” the article continued. “More than 69,000 Americans were hospitalized with COVID-19 on Christmas Eve … the Omicron variant has taken place of the Delta variant to become the most prevalent variant in the country.”

The story also referenced the hundreds of U.S. flights that were canceled over the holiday weekend, and continued to be canceled Monday, as Omicron took its toll on the aviation industry. Xinhua News Agency additionally made mention of the effect on the U.S. entertainment industry, including canceled cruises and shuttered college football games.

“Many hospitals are already overburdened, especially with patients who remain unvaccinated and those who have delayed necessary care during the pandemic. Doctors, nurses, and other workers have suffered extensive burnout,” the article continued. “After nearly two years of trauma, the pandemic is pushing many people to a breaking point, fueling a slew of public outbursts.”

The article also appeared to take aim at the efforts of the Biden administration’s attempt to slow the spread of Omicron, saying that “people across the nation seeking COVID-19 tests are facing long lines and empty shelves.”

Despite China’s insistence that it’s handling COVID-19 much better than the United States, it may be impossible to know how accurate the Xinhua News Agency’s statistics are on China’s cases. In a 2005 report, the organization Reporters Without Borders referred to the news outlet as the “world’s biggest propaganda agency.”

Newsweek has reached out to the Chinese Embassy for comment.