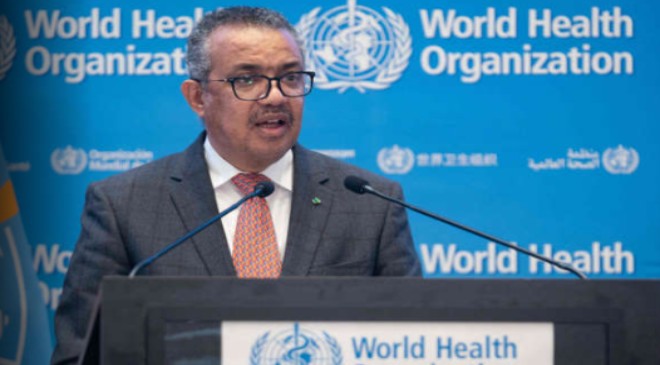 You’re reading an excerpt from the Today’s WorldView newsletter. Sign up to get the rest, including news from around the globe, interesting ideas and opinions to know, sent to your inbox every weekday.

Omicron was the Black Friday surprise no one wanted. But this mysterious and alarming new coronavirus variant has injected itself into a global debate about vaccine inequality and pandemic responses at a potentially crucial moment.

Less than a week after the new variant was reported to the World Health Organization (WHO) by South Africa, global leaders met Monday to discuss the creation of a new international agreement to better deal with historic outbreaks — what some advocates have dubbed a “pandemic treaty.” The special session of the World Health Assembly (WHA), only the second ever held by the WHO’s governing body, is expected to last until Wednesday.

The meeting began as the WHO warned of “very high” global risk from the new variant. “The emergence of the highly mutated omicron variant underlines just how perilous and precarious our situation is,” WHO Director General Tedros Adhanom Ghebreyesus said in his opening statement.

The arrival of a fast-spreading variant from an under-vaccinated country should bolster those who favor a treaty — at least in theory. For over a year, experts have warned that “no one is safe until everyone is safe.” The emergence of a worrying new variant in a continent where only 6 percent of the population is fully vaccinated is precisely the scenario warned about.

Supporters say a “pandemic treaty” or another international legal instrument could address some of the failures of the pandemic that led us here. It could put in place a global structure that would identify threats earlier and help ensure the production of vaccines or other drugs meets demand and eliminates chokepoints.

Though it will take time to fully assess the risk posed by omicron, the alarm has already drawn new attention to calls for significant reforms. “I think it will light a fire under negotiators in favor of a global agreement,” said Lawrence Gostin, a professor of global health law at Georgetown University.

But some nations, including major players China and Russia, have reacted with apprehension to any calls for a treaty. And so far the reaction of Western governments to omicron shows “just how hard meaningful reform will be,” Gostin said.

When threatened, governments don’t often think globally. They look out for themselves. And since omicron emerged, countries have responded with restrictions and outright bans on entry from countries with confirmed cases. Southern Africa, where the variant was first detected, has been particularly targeted with travel bans, even though the virus has already spread.

“Again — instead of solidarity — we see nationalism and isolation of Africa even though the omicron variant has been found in several other regions too,” said Ellen ‘t Hoen, director of the research group Medicines Law & Policy. “And this raises the question: Will we see a repeat of vaccine hoarding and the protection of manufacturing know-how exclusivity by rich nations or is this the turning point where nations get together?”

Travel restrictions have already impacted potential for global cooperation. A researcher who helped discover the variant, Tulio de Oliveira of the Center for Epidemic Response and Innovation in South Africa, said Monday that he doesn’t have access to the chemicals needed to continue working to learn more about omicron due to these restrictions.

Travel restrictions also led to the cancellation of a ministerial meeting of the World Trade Organization’s TRIPS Council on the prospect of a waiver that would temporarily suspend intellectual property rights for coronavirus vaccines and other drugs.

Advocates have argued a waiver could enable drugs manufacturers to create cheaper, generic versions of highly efficient coronavirus vaccines, though Europe has opposed the move and critics say it would hinder future innovation.

As Today’s WorldView noted, the ministerial meeting for the council, scheduled to begin Tuesday, was indefinitely delayed because of the omicron variant.

Julia Barnes-Weise, executive director of the Global Healthcare Innovation Alliance Accelerator, said that while the delay wouldn’t mean the debate over a TRIPS waiver was over, it “may make it less relevant short term as more and more supply becomes available, illustrating that the main issue is distribution.”

Others argue it was dead before omicron anyway.

A pandemic treaty could be far grander in ambition than a TRIPS waiver. An international agreement could address specific concerns raised by omicron — for example, committing countries to a certain level of vaccine manufacturing infrastructure or to the kind of surveillance done in South Africa and Botswana that helped identify the variant.

“The WHO negotiations on a pandemic treaty have not captured the broad imagination or debate, although it seems to be the far more important negotiation going forward,” said James Love, director of Knowledge Ecology International, a nonprofit watchdog group that tracks public investments and intellectual property.

A treaty would require years of negotiation and almost certainly come into force after the current pandemic. But it could ensure that future outbreaks do not lead to the same string of mistakes. “The world is learning that sorting out the sharing of vaccines and vaccine manufacturing know-how in the middle of a health crisis was a bad strategy,” said ’t Hoen. “The pandemic treaty should put mechanisms in place that are automatically triggered when a pandemic looms.”

Last week, the British Medical Journal published an article that saw 32 health ministers support a treaty, while the U.N.-backed Independent Panel for Pandemic Preparedness and Response has called for greater funding for the WHO. According to Health Policy Watch, even the United States, traditionally wary of international treaties, is “sounding almost bullish,” along with supporters in Europe, Africa and elsewhere.

But there may be limits to what a treaty can be expected to achieve. “We’ve seen for two years now that literally the dominant response to the pandemic has been travel restrictions and bans,” Gostin said, noting that the issue of travel wasn’t mentioned at all in the document drafted before the WHA negotiations started.

Countries have a habit of ignoring international agreements when it doesn’t suit them — the already-existing 2005 International Health Regulations that set out a new way of responding to outbreaks, albeit with little detail or enforcement, have been repeatedly ignored during the pandemic. And while omicron may be evidence to many why a pandemic treaty is so necessary, the world’s reaction to it may also be evidence why it won’t work.

“These measures are not based on science. They smack of racism and xenophobia,” said Ghanaian Health Minister Kwaku Agyeman-Manu at the WHA on Monday, referring to the travel restrictions on southern Africa. “And they must end immediately if other countries are to be encouraged to follow South Africa’s example.”