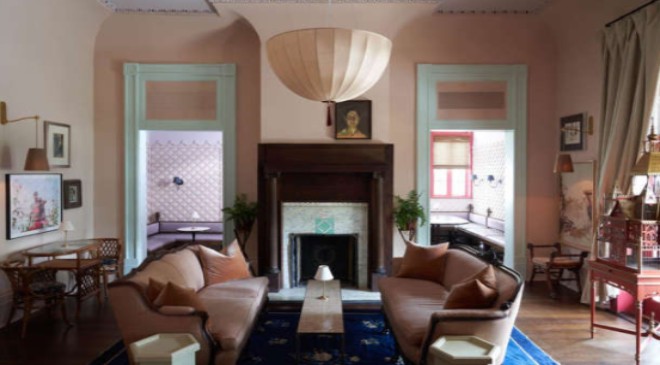 With all due respect to January, February, and March, they are not exactly the most exciting moments of the calendar year. Even if you’re content with the weather where you live, they can feel like bleak, all-business months—a season for making (and sometimes breaking) resolutions, launching work projects, and rounding up your W-2s. But that humdrum is all the more reason to get away this time of year. The only question is: Should you embrace the cold or escape it? You could layer up and enjoy a mountain getaway or a wintry European city, or pull out that swimsuit and park it poolside somewhere warm. However you decide to winter, here are eight destinations to consider.

It may be the off-season in Charleston, but it’s an ideal time to explore its pastel row houses, cobblestone streets, and iconic palms. Emeline, an old Doubletree that reinvented itself as a sophisticated hotel, is a welcome addition to the historic district. Its Southern manners are in full effect the minute you step inside its retro-inspired, jewel-toned lobby where you’re handed a boozy punch at check-in.

While a stay at here drops you right in the middle of the downtown food scene, you won’t want to miss the hotel’s own Italian eatery, Frannie and the Fox, and its nod to classic speakeasies, The Foxhole. Simply sit down in the ornate hallway and press the window for on-demand cocktail service.

At Emeline, no detail is left unattended. In each room there’s filtered still and sparkling water on tap, plus a turntable with curated records, among other amenities.

In Mexico’s capital city you can immerse yourself in unparalleled food, art, shopping, and culture. This means you’ll want a hotel you can relax into, but not one so indulgent that you won’t want to explore your surroundings. Enter: Octavia Casa.

Located in the eminently walkable neighborhood of La Condesa, the boutique hotel is set among many cafés, restaurants, and bars, as well as several art museums. It’s owned by the designer behind the fashion label Octavia, making it a minimalist dream full of neural colors and tropical plant–filled patios. Although there is no restaurant on the property, breakfast is served each morning in the pebbled-floor courtyard. At night, natural wine flows freely on the rooftop.

This South Beach hotel owned by Pharrell Williams is so passionate about its mission to have a good time, it’s named exactly that.

A stay here grants you access to the art-deco inspired hotel’s adult playground, decked out in candy colors and tropical prints, its private beach, and its 24,000-square-foot pool deck (complete with twin pools, two open-air bars, and cabanas). Even the hotel gym wants you to have fun: The indoor-outdoor area for adults will lure you onto its name-brand bikes and state-of-the-art treadmills and into its live yoga classes, but only if that’s your idea of a party.

If your idea of coziness comes with more culture than powdered snow, there is no place like London in the winter. The NoMad’s newest offering—and its first outside the U.S.—is located in a former magistrates’ court near the Royal Opera House and plenty of independent shops and restaurants. The 91-room boutique hotel saves guests a trip to the 1890s, bringing its rich, saturated sensibilities to its lobby, rooms, and library bar reserved just for guests. In keeping with its 19th-century theme, the Side Hustle restaurant certainly looks like an old British Pub, but you’ll be surprised to learn it serves up Mexican food and cocktails.

Between the skiing and snowboarding, the food and shopping scene, and one little-known film festival in January, winter in Park City, Utah, is bustling. All the more reason to make the Pendry’s newly opened Utah location your respite from it all. Here, you can après the day away near the fireplace at the indoor lounge or in the fresh air at Ski Beach, where you can sip cocktails in your favorite sweater, order small plate after small plate, and listen to live music. If that gets old—and that’s a big if—stop by one of Pendry’s two other restaurants: a Japanese grill and a casual pizza joint.

Located in Canyons Village, the Pendry offers prime ski-in/ski-out opportunities to 300-plus nearby trails. After the slopes, ease your ski-taxed muscles with a massage at the mountain-inspired spa.

In between visits to Lima and Machu Picchu, make space in your itinerary for Perú’s second-largest city, Arequipa. The well-preserved colonial town overflows with baroque architecture that’s made mostly from white volcanic rock. One of the oldest buildings is the 16th-century monastery that houses Cirqa, which upped the ante on luxury accommodations in the city when it flooded the scene in 2019.

Cirqa is an effortless combination of traditional and modern, using its textured stone walls and vaulted ceilings as a backdrop for wood furniture, muted fabrics, and handmade objects in its 11 rooms. Head to the rooftop for 360 views of Arequipa’s skyline and the three volcanoes that surround it, as well as inspired takes on traditional Peruvian dishes

Nobody winters like the Danish—the inventors of hyggë—and Copenhagen is one of the coziest cities to relax away a cold day. Here, there is no need to make the most of daylight, as candles and fireplaces illuminate the streets after the mid-afternoon sunset. Villa Copenhagen, set in a neo-Baroque building that once served as the HQ for the Danish post office, offers guests a prime location for shopping, food, and culture. Its art-filled lobby features a lounge and bar that attracts locals and travelers alike.

At Villa Copenhagen, sustainability is considered at every turn. Its main restaurant, Kontrast, is zero-waste and carbon-free, the rooftop pool is sustainably heated with the property’s waste energy, and there is an Earth Suite that’s outfitted in 100-percent-recycled decor. And while you may be tempted to sleep in after all of those activities, breakfast is just as exciting. The buffet features pastries from the hotel’s in-house bakery, RUG, which are considered among the best in the city.

Come winter, the Louisiana heat finally takes a backseat, allowing mere mortals to stroll NOLA’s streets in a light sweater. If you’re not going for Mardi Gras debauchery (or maybe even if you are), consider this newly opened Garden District gem. Holding court on a live oak–lined street, The Chloe is a reimagined Victorian mansion where rocking chairs dot the wrap-around porch and local artwork fills the living room-esque lobby. If it’s warm enough, grab a pink chaise lounge at the backyard pool and let cocktails and snacks come to you. On the ground floor, you’ll find a lobby bar and restaurant, the latter of which serves seasonal, Creole-inflected dishes for lunch and dinner as well as brunch on weekends. Upstairs are 14 unique rooms, each complete with record players, well-stocked minibars, and Oxalis Apothecary skin products.