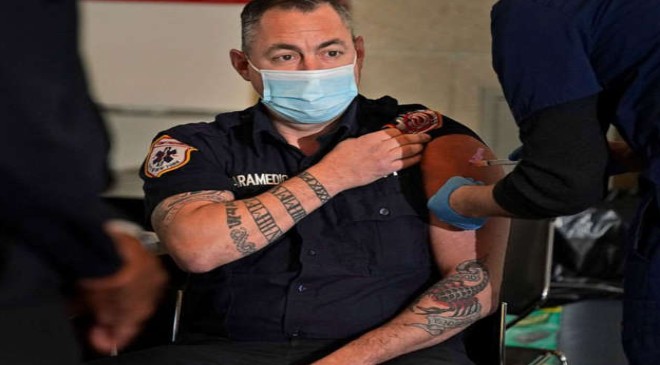 In New York City, where a vaccine mandate for municipal workers is now in effect, 18 fire companies are out of service due to sick calls Monday, but no firehouses are closed and the mayor said there were no immediate disruptions to city services.

Nearly all New York City municipal workers, including police officers, firefighters and EMTs, had until 5 p.m. Friday to get at least one shot or be placed on unpaid leave, starting Monday. While the official deadline was Friday, those who got vaccinated over the weekend will not be placed on leave.

FDNY Commissioner Daniel Nigro said he couldn’t say how many fire companies were understaffed Monday morning because it “changes by the minute.” But Nigro did call on firefighters to stop misusing sick leave and report to work.

“There are understaffed units. That understaffing could end immediately if members stopped going sick when they weren’t sick,” Nigro said. “Once the members come to their senses and stop using medical leave improperly, they can help out not just the citizens of the city but their brothers and sisters staffing the units.”

About 9,000 municipal workers were on leave without pay Monday, representing about 6% of the total city workforce, said Danielle Filson, the mayor’s press secretary.

“Mandates work,” Filson said. “That number will continue to decrease. The remaining have pending accommodations/exemption requests. They are working and subject to weekly testing.

Of the municipal departments, the Department of Corrections, which faces a later compliance deadline, currently has the most unvaccinated workers, followed by the FDNY, which has an 80% vaccination rate.