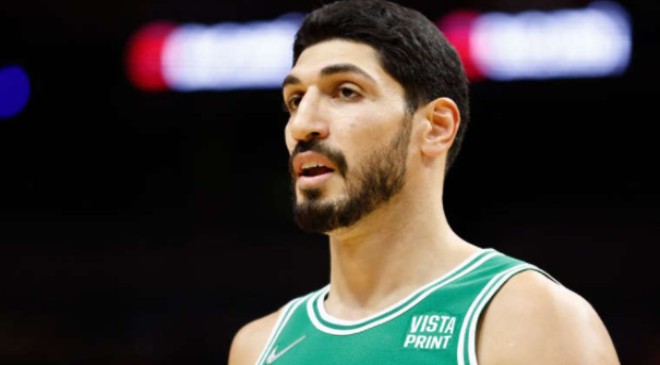 Not for the first time, the NBA is in hot water with China.

Later that day, when the Celtics took to the court in their season-opening game against the New York Knicks, Kanter wore shoes with the message “Free Tibet” emblazoned on them.

To say this didn’t go down well in China is an understatement. Tibet is an internationally recognized region within the People’s Republic of China, though many Tibetans dispute the legitimacy of Beijing’s governance. The spiritual leader of Tibet, the Dalai Lama, has been living in exile since a failed uprising against Chinese rule in 1959; since then, Beijing’s control of Tibet has only tightened.

Kanter, who was raised in Turkey, has been vocal before in defense of various political causes, including criticisms of Turkish President Recep Tayyip Erdogan. He faced death threats and the criminal trial of his father back home as a result.

His latest comments prompted an almost immediate backlash in China, with fans denouncing Kanter and the Celtics on Chinese social media. The Celtics’ official page on Weibo, China’s Twitter-like platform, was flooded with demands for the team to punish Kanter or offer a public apology.

One popular Celtics fan page on Weibo said it would not be posting updates from the team because of a player’s social media oversights. “For any behavior that undermines harmony of the nations and the dignity of the motherland, we resolutely resist!” the fan page posted.

Meanwhile, the Chinese broadcast of the Celtics-Knicks game was pulled by video-streaming site Tencent. The website for Tencent Sports indicated that it would not livestream upcoming Celtics games.

At a news conference Thursday, a spokesperson for China’s Foreign Ministry said Kanter was “trying to get attention” and his remarks “were not worth refuting.”

“We will never accept those attacks to discredit Tibet’s development and progress,” the spokesperson said.

The NBA has not yet publicly commented on the matter. CNN has reached out to the NBA and Tencent.

The backlash highlights the league’s struggle to walk the fine line between allowing social justice activism for its players and appeasing its massive — and lucrative — Chinese market.

The league has spent years and many millions of dollars investing in China, helping to build courts, giving broadcasting rights away for free and bringing its stars over for preseason games.

That large investment and return means the league is also reluctant to anger its fans and partners in China — which was perhaps never more clear than in 2019.

That year, then-Houston Rockets general manager Daryl Morey set off a firestorm when he tweeted his support for pro-democracy protesters in Hong Kong. Soon after, the NBA’s Chinese partners suspended ties, state broadcaster CCTV halted all broadcasts of preseason matches, and the Chinese government said the NBA needed to show “mutual respect.”

Morey apologized and deleted the tweet, and the NBA said his comments were “regrettable” — prompting outrage from fans in the United States and Hong Kong, who accused the league of censorship and bowing to Beijing’s pressure.

Other basketball stars weighed in, split in their reactions. shaquille o Neal, a retired icon of the sport, expressed support for Morey and for free speech, “one of our best values here in America.” Meanwhile, lebron James drew flak for criticizing Morey as “misinformed” and “not educated” — an apparent contradiction to the Los Angeles Lakers star’s reputation as a staunch social justice advocate.

The rift Morey exposed — and now, the controversy over Kanter’s comments — highlight the risk of criticizing China, where surging nationalism and patriotic propaganda mean foreign detractors can be met with a wave of online vitriol and calls for boycotts.

The Chinese public holds massive economic power — and they know it, having wielded the threat of boycotts against a number of perceived political offenders. And this fraught relationship extends beyond sport, with similar questions of Chinese influence over corporate America stretching into Hollywood, fashion, air travel, tech and more.

And though Western companies have long made compromises to operate in China, the deteriorating US-China relationship — and increasing nationalism within the economic powerhouse — leave an increasingly narrow path to walk.