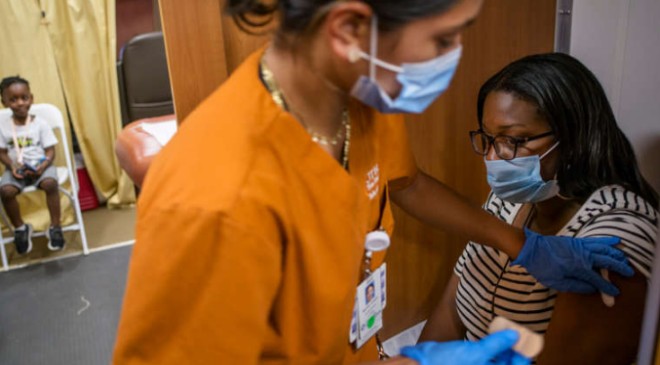 People who both had Covid-19 and are vaccinated don’t need to rush to get the boosters now rolling out across the U.S., health experts say.

Millions of Americans who have received Pfizer Inc. and partner BioNTech SE’s Covid-19 vaccine now qualify for an additional dose, under the Centers for Disease Control and Prevention’s recommendation of shots for seniors and certain at-risk adults. Some of those who qualify are people who have been infected with the disease, either before they were vaccinated or after.

Several studies suggest that people who have had Covid-19 and were fully vaccinated have strong protection, including against variants, and probably don’t need the boost, though the research is preliminary and data is incomplete, according to scientists who specialize in vaccines and immunology.

More is known about people who had Covid-19 and then were vaccinated, scientists said, than those who were vaccinated and had breakthrough infections.

The studies suggest a Covid-19 exposure effectively serves as a dose of the vaccine, scientists said. Like a vaccine dose, the real-world infection prompts the immune system to generate the antibodies, B cells and T cells that could fight off the virus in the future.

People who were infected and vaccinated “just won the game,” said Dr. Paul Offit, a member of the Food and Drug Administration’s advisory panel on vaccines, who supports boosters for older adults but not a widespread campaign this time. “I wouldn’t ask them to get a booster dose. I think they just got it” by exposure to the coronavirus.

Last week, researchers affiliated with the ZOE Covid Study app, which is for people in the U.K. to self-report symptoms and test results, said real-world infection followed by two doses of the Pfizer-BioNTech shot provided 94% protection up to six months after vaccination, compared with 80% protection from vaccination alone or 65% from only infection.

The researchers, who reported the results via press release, based the findings on more than 650,000 Covid-19 test results reported by app users. The findings weren’t peer reviewed or published in a scientific journal.

The strong protection provided by the combination of real-world infection and vaccination doesn’t mean people may not eventually need a booster, scientists said.

Meanwhile, some people with weakened immune systems or underlying medical conditions might want to get a booster soon, the scientists said.

Another factor that people who were infected and vaccinated should weigh before getting a booster is whether the extra dose could raise their potential risk of myocarditis, inflammation of the heart that is rare but most common in younger men after their second dose of a messenger RNA vaccine, said Peter Hotez, dean of Baylor University’s National School of Tropical Medicine.

Several studies show the vaccines remain effective at protecting against severe disease and hospitalization but may lose strength guarding against infection or milder symptomatic illness.

The Biden administration has pushed for booster shots to shore up people’s molecular Covid-19 defenses, after some studies indicated the protection wanes over time and the initial vaccine series was less effective at protecting against the Delta variant than the original strain.

In the U.S., more than 186 million people are fully vaccinated, according to the CDC. The agency stopped tracking breakthrough cases that don’t result in hospitalization or death, but a Wall Street Journal analysis in August found 0.1% of fully vaccinated people at the time had developed cases.

The combination of immunity from a real-world infection and the protection generated by vaccination is known as hybrid immunity.

So far, data indicates hybrid immunity offers stronger protection than having just been either vaccinated or infected, immunologists and epidemiologists said.

The findings suggest that people with hybrid immunity have enough protection without needing a booster, the experts said.

People who have been vaccinated and infected “are likely to be the last group that really needs the booster because they really had three exposures,” said Dr. Akiko Iwasaki, an immunologist at Yale University.

The real-world infection may be especially additive because it exposes the body to more than the spike protein targeted by vaccines, she said.

Researchers from Rockefeller University in New York said that people who were infected with Covid-19 and later vaccinated with a messenger RNA vaccine saw 20 to 40 times greater immune response than those who weren’t vaccinated, in a study published in the journal Nature in June.

Oregon Health and Science University researchers said that neutralizing-antibody levels in people with hybrid immunity against the Alpha variant were 5.2 times as great as levels in people who had only been vaccinated, in a study posted on the medRxiv preprint server in April. The team tested other variants and saw similar effects.

The researchers found that hybrid immunity from infection and vaccination generally confers more immunity than vaccine-induced immunity alone, including against variants. The study hasn’t yet been peer reviewed or published in a scientific journal.

Only people who are six months past their second dose, received the Pfizer vaccine and fall into several high-risk categories because of age, underlying health conditions or occupation are currently eligible for boosters. Decisions are pending on Moderna Inc. and Johnson & Johnson boosters.