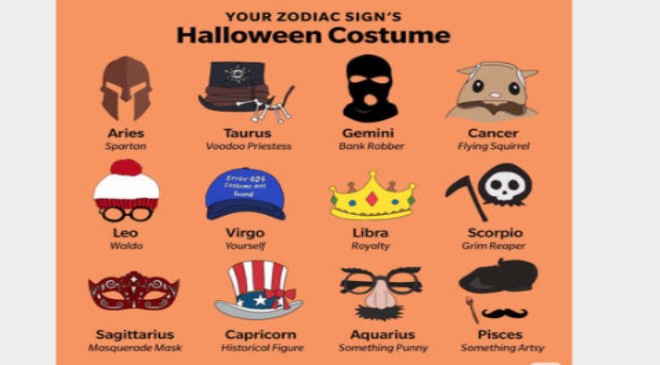 What does Halloween mean to you?

Everyone has a different approach to celebrating Halloween. Do you see the holiday as a chance to come up with a good joke costume or to scare people? Are you a minimalist, or do you go above and beyond when you’re in character? Similar to your zodiac power color or your favorite candy based on your zodiac, finding the best Halloween costume may boil down to your personality, as determined by your zodiac sign. Time to let the stars guide you!

People of this zodiac sign are straightforward and direct. That is why for Halloween, dressing up is a simple task for Aries. “Aries will be content with a quick makeup illusion or a statement piece that is easy to put on,” says astrologer Guadalupe Terrones. “Aries rules the head, so likely most of their costume will be makeup, a headband, or something else they can wear and take off [easily].” Skip the full Halloween costume and gear up with this King Leonidas Spartan helmet, a special effects modeling wax kit for realistic cuts and scabs, or an apropos mystical ram’s horn headpiece. Try one of these easy Halloween makeup ideas anyone can master.

When it comes to dressing up for Halloween, Taurus is the exact opposite of Aries. This zodiac sign relishes any chance to primp and preen, so elaborate and impressive costumes appeal most to them. “Taurus will need the whole day to get ready for Halloween, but it will be worth it,” Terrones says. “By the end of the night, they will be unrecognizable. Taurus sees dressing up and getting made up as an art form, and this is just another night to show off their skills.” Taurus will be absolutely bewitching in a Voodoo Priestess Halloween costume. Another option is to go full-on cosplay with a My Hero Academia anime costume or this deluxe Hocus Pocus Winifred Sanderson outfit. This clearly says a lot about a Taurus personality. If you’re interested in learning more about the zodiac sign elements, you can learn what yours says about you.

For Gemini, the fun of Halloween is partying with friends. Friends of Geminis, beware: They like to play the trickster. “Gemini is the type to play pranks on everyone during Halloween,” Terrones says. “They need a costume that’s going to let them carry a bunch of tricks up their sleeve. They’re also the most likely to disappear for a costume change.” Kick off the night as a bank robber or Little Red Riding Hood so you can carry some surprises in your money sack or wicker basket. Once you’ve finished all of your mischief, change into this jester costume and embrace being the fool of the party! You can even try spitting out some of these corny Halloween jokes

Cancer never feels better than when in the comfort of their own home, and the same is true even on Halloween. “Cancer is a stay-at-home sign,” Terrones says, “so I can see them in an animal onesie and calling it a costume. If Cancer dresses up, then the costume better be comfortable. No tight corsets or high heels for this sign.” Snuggle into this flying squirrel onesie, and stuff the hidden pockets with as much candy as you can grab! The “wings” provide extra coziness and can serve as a kind of blanket when you curl up with your family to watch your favorite scary movie or to tell the best ghost stories. Other adorable (and easy) onesies include glow-in-the-dark skeleton jumpsuits for the whole family or a Snorlax onesie. (Literally, all this Pokémon does is sleep!)

Leos thrive in social settings, thanks to their gregarious and charismatic natures. However, this spooky holiday is not necessarily a dark and creepy one for people of this zodiac sign. “Leo is the sun,” Terrones explains, “and Halloween is all about tricking and treating under the darkness of the moon. They’ll want to wear something that brightens up the room and turns heads.” So, if you’re a Leo, you’ll probably want to take a goofier approach. Ensure you stand out with an inflatable dinosaur costume, giant chicken suit, or Where’s Waldo outfit. Who knows—maybe they’ll find you in one of the spookiest towns in America.

Virgo (August 23–September 22): As themselves

Even if a Virgo loves Halloween, they will likely skip dressing up this year simply because it is not practical. With no major parties to attend due to the pandemic, people of this zodiac sign won’t really see the point in putting in the same effort they usually would. They’d rather find ways to save money this Halloween. “If they do dress up,” Terrones surmises, “you won’t be able to tell that they did, even though they’ll tell you exactly who or what they’re portraying when asked.” Demonstrate your love for Halloween, but keep it simple with a “Normal People Scare Me” hoodie, wicked witch hat, a roaring ’20s costume set, or one of these cheap Halloween costumes.

Libra finds the greatest joy in working with others, so being part of a pair or a group Halloween costume will be the most fun for them. “[Libra] will be the sign to do a complementary costume with their partner,” Terrones says. “If single, Libra, ruled by the goddess of beauty, will get all dolled up for the night hoping to meet their mate or vibe with a soul sibling.” Choose a costume that can stand on its own but also has the ability to be a joint costume, like Iron Man (you’re bound to run into other Avengers) or a royal robe. Whether you’ve already found your Prince Charming or you’re still searching for him, you’ll be dazzling. Or you can go for one of these couple Halloween costumes that are both clever and cute.

Hail, kings and queens of darkness! Halloween season is also Scorpio season, so you will be in your element tonight. “Scorpio owns Halloween,” Terrones says. “Scorpio has no issues wearing the darkest, spookiest costume out there. It’s the only time they feel seen for their depth without having to fear being judged for it.” You know in your bones that Halloween isn’t a time to joke around—it’s time for a scare. You will feel right at home as the Grim Reaper, a nightmare clown, or a disturbingly realistic zombie. You’ll also definitely want to read about these Halloween true events that actually happened.

Sagittarius sees October 31 as just another night to party, only with a theme. “For them, it’s more about the new people they’ll meet or the unforgettable experiences they’ll have,” Terrones explains. “Pulling an all-nighter requires a costume that both supports their stamina and fits in with the culture.” Wear something easy yet flattering, like a form-fitting military costume or a marvelous Venetian masquerade mask. If you want to go for something creepy, check out these scary Halloween costumes that will give you nightmares.

“Capricorn will wear a costume that is classy, made from clothes they probably already had in their closet,” Terrones says. “They don’t want the frills or the fuss—and they want to look respectable.” Your Halloween costume, Capricorn, will be at the intersection of convenience and wit. It will be something that doesn’t take much effort but still conveys your status and aptitude. One option is to dress up as a historical figure, like William Shakespeare or Jackie Kennedy.

The most idiosyncratic zodiac sign, Aquarius always tries for the most original costume. “Aquarius will wear a costume that no one understands, just so they can start a conversation about the subject,” Terrones says. “They’ll wear whatever gives them an outlet for talking about their ideas in hopes of garnering acceptance for them.” These are people who will turn concepts into costumes, like the clever “Blessing in Disguise” costume: a shirt with the word “blessing” on it and disguise glasses. There is also “Hawaiian Punch,” a hula outfit with boxing gloves.

“Pisces sees Halloween as an opportunity for expression,” Terrones says. To you, Pisces, a Halloween costume isn’t so much about the scare factor as it is about flaunting your artistic capability. “While Taurus is skilled at creatively dressing up,” Terrones elaborates, “Pisces doesn’t want to just create a costume that looks good. They want to create a costume with a bigger message.” Depict one of your favorite works of art or literature with your costume, like this Starry Night dress or a Mona Lisa costume. Now that you know the zodiac sign Halloween costumes, find out the zodiac signs compatibility to see who should pair your costume with this year.