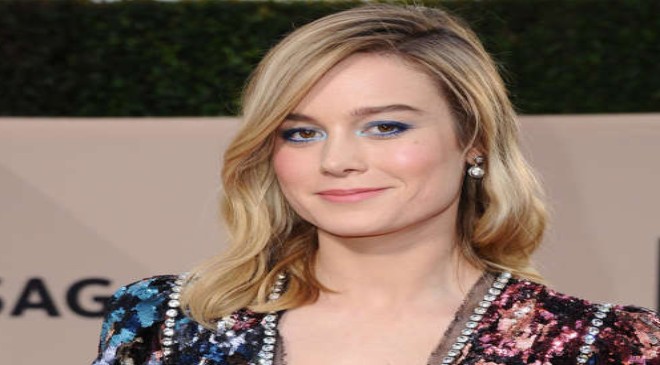 Brie Larson isn’t her given name, and her stage name was inspired by an American Girl Doll.

Per Today, Larson told Jimmy Fallon in 2015 that she was born Brianne Desaulniers, but she wanted to change it because she was sick of people mispronouncing her French surname.

Around the time she was deciding on her stage name, the actress was rather fond of the American Girl Doll Kristen Larson.

When Larson was about 7 or 8 years old, she appeared as an extra on “The Tonight Show With Jay Leno.”

On her first episode, she played a Girl Scout. On the second, she appeared as an uncredited “Roadkill Easy-Bake Oven Girl.”

In a 2017 interview with Jimmy Fallon, Larson said she thinks she did “about a dozen or two of these fake commercials” and the rest is Hollywood history.

Her first celebrity autograph was from Meat Loaf.

Although Leno may have helped launch her career, Larson says the first autograph she ever got was from the singer Meat Loaf — and it was a gift from her neighbor.

“Our old neighbor in our apartment complex made his fat suit for ‘Fight Club,'” Larson told Fallon in the same 2017 interview.

She once jumped out of a window at a college party.

Although Larson never went to college, in 2015, she told Jimmy Fallon she attended a party at Brown University while she was filming a movie in Rhode Island.

Larson said she was 18 at the time and when police showed up to the house party, she jumped out of a window because she thought she was going to be arrested.

Actress Rooney Mara caught up with Larson post-jumping out the window, and she said the two were lost in the snow when a man in a “full suit of armor made of aluminum foil” — he’d just been at a “LARPing” or live-action role-playing party — gave them a ride.

The classic Jennifer Garner film had a whole host of celebrities in it, but you may have missed Larson’s cameo.

She appeared as one of the Six Chicks alongside “Pretty Little Liars” star Ashley Benson.

The movie also featured her future “Avengers” costar Mark Ruffalo, who, according to Entertainment Tonight, only discovered they were both in the film in 2019.

Larson also appeared alongside Chris Evans in “Scott Pilgrim vs. the World.”

In 2010, long before “Avengers: Endgame,” Larson appeared alongside Chris Evans in “Scott Pilgrim vs. the World.”

Larson is a musician, and she had a record deal at the beginning of her career.

Larson is also a professional singer. Per her IMDb page, she has soundtrack credits for her films “Hoot,” “Room,” and “Scott Pilgrim vs. the World.”

She also signed a record deal and released a solo album in the mid-2000s, according to Billboard. Larson even tweeted in 2017 that she went on tour with singer Jesse McCartney in her pop-star days.

More recently, Larson had been spotted with her guitar on Instagram covering songs by singers like Maggie Rogers, Taylor Swift, and Ariana Grande.

She has some solid go-to karaoke songs.

Larson’s not above belting out an oldie during a work karaoke night.

She told Yahoo in 2015 her go-to songs are Usher’s “Burn,” Mariah Carey’s “We Belong Together,” Swift’s “Shake It Off,” and Destiny Child’s “Say My Name.”

After shooting serious subject matter for her Oscar-winning role in the dark movie “Room,” karaoke became a release for the actress.

Larson has never been shy about her love of video games.

She told IGN in 2005 that her 15th birthday party was even Nintendo-themed.

“It was awesome,” she told the publication. “I had a bounce house and I had all my friends dress up as their favorite Nintendo character and we played video games and had these giant blow-up hammers and whacked each other in the bounce house. It was very fun!”

She also tweeted at Nintendo in 2017  upon the release of the new Zelda game, and in another 2015 tweet, she called “Super Mario 3D World” one of the greatest achievements in Nintendo history.

Larson and Samuel L. Jackson worked together before “Captain Marvel.”

Larson and Samuel L. Jackson share quite a bit of screen time in “Captain Marvel,” but this isn’t the first time the two actors have appeared alongside each other.

They worked together in 2006 on the “Farce of the Penguins” mockumentary, again in 2017’s “Kong: Skull Island,” and once more in Netflix’s “Unicorn Store” (which she also directed) that same year.

Despite having a feline friend in “Captain Marvel,” Larson is allergic to cats.

But Larson had to distance herself from her furry costar due to her allergies.

“It was like the joke on set because I could do really crazy things stunt-wise, but the cat was a big obstacle for me,” Larson told USA Today in 2019. “It’s weird how you can train and get your body to do insane things but allergies are kind of a hard stop. That’s where your body’s like, ‘That’s it.'”

Larson confined herself to her home for a month to get in the mindset for her role in “Room.”

While preparing for her role in the Oscar-winning film, Larson said she stayed home for a month.

Although the self-imposed isolation is nothing like the experience her character had in the film, Larson says she learned a lot about herself.

“I reminisced a lot about my past – on certain regrets or moments missed. I figured it was a process that Ma had gone through before Jack came along,” Larson told BBC.com in 2016. “It was stream of consciousness a lot of the time. I’d get really into it and get stuck in a 10-year-old mind for hours at a time,”

Larson later won the Oscar for best actress for her role in the movie.

She forages for mushrooms in her free time.

In a 2017 interview with the Sydney Morning Herald, Larson said that one of her hobbies is foraging for mushrooms.

“I am really passionate about mushrooms and I don’t mean the psychedelic ones,” she told the publication. “I am part of a mycological society in Los Angeles and we go foraging — you have to go about an hour outside Los Angeles to find them, but I also like to attend the Wine and Mushroom Festival in Mendocino [Northern California].”

Fans will also notice that “Mushroom Forager” is listed right after “Actor” in her Twitter bio.

Larson recently made a series of videos on her YouTube channel that broke down all of the roles she auditioned for and didn’t get.

Among the list were “Gossip Girl,” “The Hunger Games,” the new “Star Wars” films, “Spy Kids,” and “Avatar.”

By the time she was offered the Marvel superhero role, Larson said she was shooting “Kong: Skull Island,” and she said, “Oh, I can’t do that. I have too much anxiety. That’s too much for me … ,” so she told them no.

After a few months of repeated asks from Marvel and a little pushing from her talent team though, Larson sat down for a meeting about the role and the producers finally sold her on it.