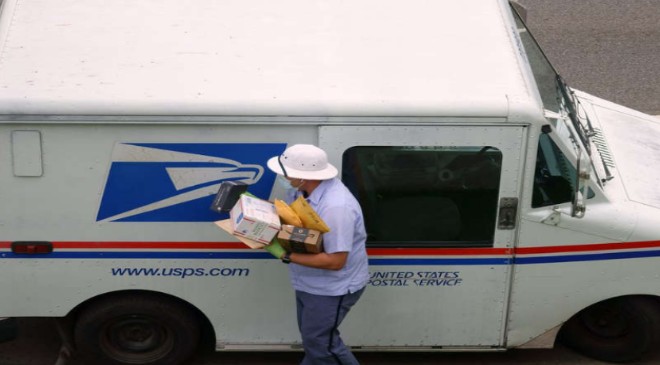 Even in the age of email and using the internet for practically everything, there’s a good chance you still rely on traditional mail to get a few things done. But whether it’s your annual holiday cards going out on time or a care package you’re hoping makes it to your loved one swiftly, it can still be a helpless feeling whenever you drop something off in a mailbox or at the post office. Now, the United States Postal Service (USPS) has announced it’s making a major permanent change that’s going into effect in a matter of days. Read on to see how your daily deliveries are about to get different.

The USPS will permanently change the delivery time for some mail, slowing it down by 30 percent.

It sounds like the term “snail mail” is about to take on a whole new meaning. Beginning Oct. 1, the Postal Service will “implement new service standards for First Class Mail and Periodicals” announced in March that will increase the amount of time it takes for them to be delivered, USPS spokeswoman Kim Frum told USA Today in an email.

The changes will primarily affect any mail that’s traveling a long distance, such as one coast to the other, adding that “most first class mail (61 percent) and periodicals (93 percent) will be unaffected” by the changes, Frum wrote. Single-piece first-class mail, which typically includes smaller and lightweight envelopes and parcels, can still expect to be delivered within two days if it’s being sent within the same region.

USPS is also temporarily increasing the price of sending packages for the holidays.

But it’s not just the delivery time of your letters and packages that will be affected by the changes from the USPS. The price of sending a domestic commercial or retail package will also temporarily be going up from Oct. 3 through Dec. 26, covering the peaking shipping times seen over the holiday season.

According to the Postal Service, the temporary changes are similar to the ones put in place over the 2020 holiday season, with price increases ranging from 75 cents for Priority Mail and Priority Mail Express Flat Rate Boxes and Envelopes all the way up to $5 for larger packages shipping to certain zones. However, the price increases will not affect international shipping rates, Frum specified in the email.

The difference of a few days for delivery might not feel like much at a time when it already feels like mail moves at a glacial pace. But according to CNET, the slowdown will affect everything from birthday cards and wedding invitations to paychecks and tax credits or notices. By the Postal Service’s estimates, mail that used to take two to three days to get delivered may take as many as five, which can create a crunch when receiving or sending time-sensitive items or documents.

The changes could also create massive headaches for businesses that rely on USPS to ship products, especially when e-commerce is replacing traditional brick-and-mortar shopping. In addition, residents in the Western states and parts of Texas and Florida will also be disproportionately affected, according to a report from The Washington Post. And for those who live in rural areas, states such as Alaska and Hawaii, or territories such as Puerto Rico, service will also become drastically slower.

USPS says the changes will help to increase “consistency, reliability, and efficiency.”

According to the USPS, the forthcoming changes are part of the Postal Service’s 10-year “Delivering for America” plan to help the agency tackle its financial woes and iron out its operations. They explain that part of the reason for the planned delivery delays is a shift from using costly airplanes to more budget-friendly trucks—which the agency also argues makes items less prone to weather-related delays.

“The Postal Service can entrust its ground network to deliver more First-Class Mail, which will lead to great consistency, reliability, and efficiency that benefits its customers … whether it’s 300 miles or 3,000 miles, the current standard for [first-class packages] require 3-day service for any destination within the contiguous U.S. with a drive time greater than six hours,” Frum said to USA Today. “This is unattainable and forces us to rely on air transportation, yielding unreliable service. With this change, we will improve service reliability and predictability for customers while also driving efficiencies across the Postal Service network