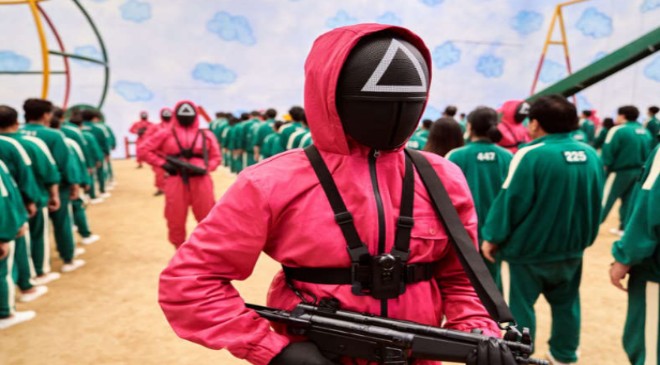 “Squid Game will definitely be our biggest non-English language show in the world, for sure,”  Sarandos, who is also the head of content at Netflix, said Monday at the Code conference in Los Angeles. But he added that there’s “a very good chance it’s going to be our biggest show ever.”

Sarandos didn’t specify the metric used to gauge its popularity. Traditionally, Netflix tabulates the popularity of its originals by counting how many people watch a title for at least 2 minutes in the first 28 days of release. Squid Game was released Sept 17, giving it only about 10 days of viewership so far.

Using Netflix’s standard metric, Squid Game would be overtaking Bridgerton — a racy Regency-era drama released late in 2020 — as Netflix’s most popular series. It would also overtake Lupin, a French heist series that is currently Netflix’s most-watched non-English language series yet, and No. 2 most-watched series generally after Bridgerton.

For years, Netflix was notoriously tight-lipped about viewership. The creator of House of Cards, which put Netflix’s original content efforts on the map, once said the company wouldn’t even share viewership metrics with him. But within the last two years, Netflix has grown much chattier about the popularity of its shows and movies, to help recruit talent and stoke buzz. Netflix also added a top-trending ranking to its service, so people can see what the most popular titles streaming on Netflix in their country are on any given day.

But Netflix’s audience stats have exasperated parts of the TV industry for being unverified, unsupported and disclosed without much accountability.

“We’re trying to be more transparent with the market, with the talent, with everybody,” Sarandos said Monday.