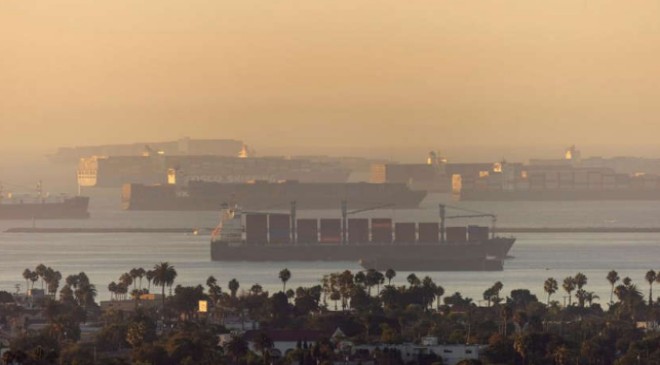 Southern California is dealing with a traffic jam unlike any other, as a record number of container ships have been stuck waiting in the waters outside the ports of Los Angeles and Long Beach to unload cargo.

The bottleneck this week at America’s busiest port complex is the result of a shortage of trucks and drivers to pick up goods, coupled with an overwhelming demand for imported consumer products

As of Wednesday, 62 container ships were waiting offshore to unload cargo, according to the Marine Exchange of Southern California.

The backup of ships has grown since last week, when 60 ships were waiting to unload. On Sunday, there were a record 73 cargo ships waiting to enter the ports.

The surge has put increasing pressure on the Los Angeles-Long Beach port complex, already the largest in the US and the ninth largest in the world. Together the ports move 40% of container imports in the US and 30% of exports, and serve as a key gateway for imported goods from Asia.

“The Americans’ buying strength is so strong and epic that we can’t absorb all this cargo into the domestic supply chain,” Gene Seroka, the port of LA director, told CBSLA.

With the peak shipping period getting under way as the holiday shopping season approaches, in recent weeks the ports have been setting new records for ships in port almost daily. Traffic has been rising since last summer amid a pandemic-induced buying boom that created a backlog at both ports and overwhelmed the workforce, some of whom were themselves recovering from Covid.

The pandemic has battered the global supply chain, offloading the surging demand on to suppliers and leading to shortages of goods and containers and increasing costs for consumers.

The ports have broken monthly cargo records regularly since last summer. The Long Beach port is on pace to process more than 9m container units this year, exceeding last year’s record of 8.1m units, the most in the port’s 110-year history. Meanwhile, the Los Angeles port in June became the first western hemisphere port to process 10m container units in a 12‑month period.

Robert Garcia, the Long Beach mayor, announced this week that the southern California ports are working with the Biden administration and the transportation department to reduce delays for ships.

The ports said this week that they would expand their hours for cargo pickup, with Long Beach experimenting with a 24/7 pilot program, in response to the historic cargo surge.

“The port of Long Beach is prepared to take bold and immediate action to help the supply chain move the record cargo volumes that keep our economy moving,” said Mario Cordero, the executive director the the port.