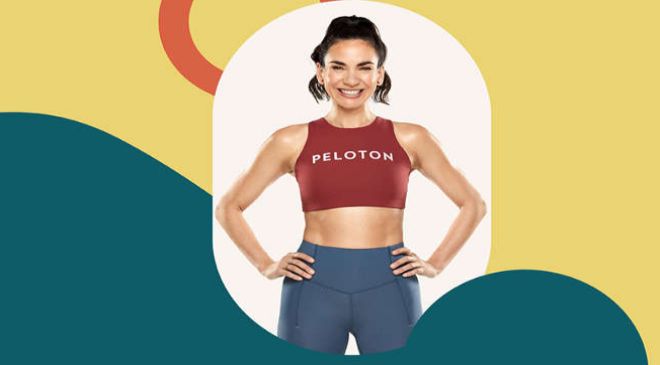 At the end of each of her yoga classes, Peloton instructor Mariana Fernandez treats her students to a classic Spanish sobremesa. The word—which has no English equivalent—describes the period after a meal in which people spend time together conversing and sharing in each other’s company.

“We move together and we sweat, and then we come together afterward in a sobremesa and talk about how it made us feel, what parts we connected with, what it reminded us of—whether that’s home, someone’s grandmother, or growing up,” says Fernandez, who introduced the tradition to her students when she started teaching on the Peloton platform earlier this year. “It’s this beautiful way of being able to reflect and to see how some of these classes really resonate with you.”

As a first-generation immigrant—her family moved from Mexico to San Diego when she was seven years old—Fernandez’s LatinX roots have become integral to her yoga practice. “I wondered how people could come together beyond the mat, so I started to implement my own cultural elements,” she says.

As a 5,000-year-old Indian tradition, yoga has its own full array of cultural elements. But in the last few decades, the rise of boutique fitness has seen a white-washing of the industry—77.1 percent of yoga teachers in the United States identify as white, according to a 2021 survey. And the lack of BIPOC (Black, Indigenous, people of color) representation in these spaces has given people of color a sense that they aren’t welcome in the practice.

“For those who are BIPOC, that means that walking into a studio often becomes an experience of seeing no bodies that look like their own, being in the minority, not seeing themselves in the teacher, and feeling othered—not centered—in a practice that’s supposed to act like a connective tissue between all people,” Rebeckah Price, yoga teacher and the co-founder of The Well Collective, previously told Well+Good. This feeling of “othering” for people of color—particularly those in the LatinX community—is something that Fernandez is trying to change by bringing aspects of her own Mexican heritage into her classes.

After receiving her teacher training certification while she was in graduate school New York City in 2009, she moved to Mexico City where she began teaching yoga in Spanish. “When I moved back to New York, I was looking for a way to be able to teach in both languages, because I wanted to find ways to bring yoga to the LatinX community,” she says. “When I was interviewing at Peloton, they asked if I taught in other languages, and when I said I taught in Spanish, it opened up this whole new world. I wondered, ‘Why don’t we do both? Why don’t I bring classes in my native tongue to this huge LatinX community that we have in our members?’ It was the opportunity of a lifetime.”

In the months since, Fernandez has brought her bilingual classes—and the sobremesas that follow them—to Peloton’s 4.4 million members. “To be able to speak the language that I grew up as a part of my job is not only just a gift, but I think it’s providing visibility and access to a giant community within this country,” she says. “People who spoke the language with their parents, or are first-generation or second-generation, feel connected culturally to the cadence, vocabulary, and expressions.”

In addition to teaching in Spanish, Fernandez also soundtracks her classes with traditional music that reminds her of home. “All of a sudden people hear the sounds of Mariachi music, which is such a Mexican staple,” she says. “And even if you’re not Mexican, a lot of people in Latin America grew up with Mariachi music, so it hits that ‘nostalgia’ button and reminds them of their childhood.”

Above all, Fernandez’s priority has always been making students feel welcome in her space. “A big thing for me is figuring out how to make yoga, as a practice, more accessible, and have people become a little bit more open to it and explore how they move and what parts of it they like,” says Fernandez. “I try to keep the elements, philosophies, and practices of yoga—the meditation, the breathwork, the movement, the awesomeness—as well as giving it my own flair and spin.”

Oh hi! You look like someone who loves free workouts, discounts for cutting-edge wellness brands, and exclusive Well+Good content. Sign up for Well+, our online community of wellness insiders, and unlock your rewards instantly.