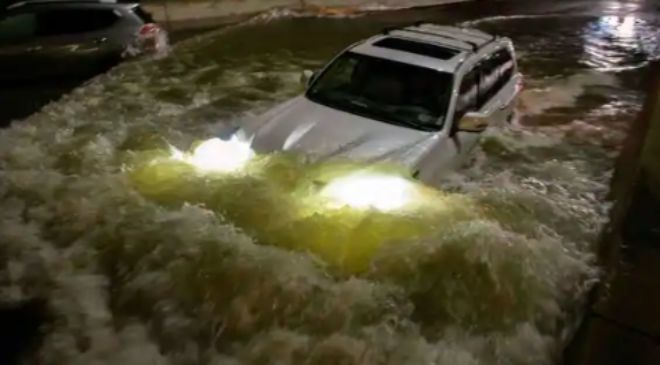 Flooding killed at least 14 people, swept away cars, submerged subway lines and temporarily grounded flights in New York and New Jersey as the remnants of Hurricane Ida brought torrential rains to the area.

New York City Mayor Bill de Blasio told a Thursday news conference there were nine confirmed fatalities in New York caused by what he had described as a “historic weather event.”

Countless rescues were made overnight of motorists and subway riders who became stranded in the flood waters, de Blasio said. “So many lives were saved because of the fast, courageous, response of our first responders,” he said.

Streets turned to rivers as flooding swept away cars in videos captured by stunned residents.

Four residents of Elizabeth, a city in New Jersey, perished in flooding at Oakwood Plaza, a public housing complex that was “flooded out with eight feet of water,” city spokesperson Kelly Martins told Reuters.

“Sadly, more than a few folks have passed as a result of this,” New Jersey Governor Phil Murphy said without elaborating on the death toll at a briefing in Mullica Hill in the southern part of the state where a tornado had ripped apart several homes.

The hit to the Middle Atlantic region came three days after Ida, one of the most powerful hurricanes to strike the U.S. Gulf Coast, devastated southern Louisiana. Reconnaissance flights revealed entire communities destroyed by wind and floods.

Ida’s remnants brought six to eight inches (15 to 20 cm) of rain to a swath of the Northeast from Philadelphia to Connecticut and set an hourly record of 3.15 inches for Manhattan, breaking the previous one that was set less than two weeks ago, the National Weather Service said.

The 7.13 inches of rain that fell in New York City on Wednesday was the city’s fifth highest daily amount, it said.

The number of disasters, such as floods and heat waves, driven by climate change has increased fivefold over the past 50 years, according to a report released earlier this week by The World Meteorological Organization, a U.N. agency.

One person died in Passaic, New Jersey, due to the flooding and the search continued for others, the city’s mayor, Hector Lora, said in a video posted to Facebook on Thursday.

We are presently still making efforts to identify and try to locate other individuals that have not been accounted for,” Lora said.

NBC New York reported at least 23 fatalities, including a toddler and said that most “if not all” deaths were flood-related.

The governors of New York and New Jersey, who had declared emergencies in their states on Wednesday, urged residents to stay home as crews worked to clear roadways and restore service to New York City subways and commuter rail lines serving millions of residents.

“Right now my street looks more like a lake,” said Lucinda Mercer, 64, as she peered out her apartment window in Hoboken, New Jersey, just across the Hudson River from New York.

Mercer, who works as a crisis line fundraiser, said flood waters were lapping halfway up the hub caps of parked cars.

Subway service in New York City remained “extremely limited” while there was no service at all on commuter rail lines to the city’s northern suburbs on Thursday morning, the Metropolitan Transit Authority (MTA) said. Janno Lieber, the MTA’s acting chair and CEO, told local media it was going to take until later in the day to restore full service.

The Long Island Railroad, which is also run by the MTA, said early on Thursday that services on most of its branches had been restored but commuters should expect systemwide delays of up to 30 minutes.

Michael Wildes, mayor of Englewood, a city in New Jersey located just across the Hudson River from Manhattan, said the city’s central business district was under water and some residents had to be evacuated to the library overnight. “We are being humbled by mother nature in this last year and a half,” Wildes told Reuters by phone.

He said there were no known deaths in Englewood, although police, fire and other emergency responders had extracted several people trapped in their cars.

Mark Haley of Summit, New Jersey, said getting back home after a 15-minute drive to a bowling alley to celebrate his daughter’s sixth birthday on Wednesday night became a six-hour slog through flood waters that often left him trapped.

All New Jersey Transit rail services apart from the Atlantic City Rail Line were suspended, the service said on its website.

Amtrak said on Thursday morning that it canceled all passenger rail service between Philadelphia and Boston.

New Jersey’s Newark Liberty Airport warned about flight disruptions and said about 370 flights were canceled as of Thursday morning.

More than 200,000 electricity customers were without power early on Thursday in five northeastern states that got most of the rains overnight, mostly in Pennsylvania and New Jersey, according to PowerOutage.US, which gathers data from utility companies. There were also outages in New York, Connecticut and Massachusetts, it said.

This story has been published from a wire agency feed without modifications to the text.