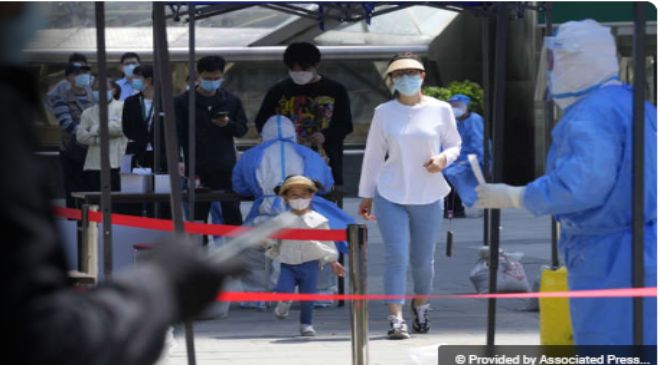 CHENGDU (Reuters) -Chinese hospitals were under intense pressure on Wednesday as a surge of COVID-19 infections strained medical resources, while the scale of the outbreak and doubts over official data prompted some countries to consider new travel rules on Chinese visitors.

In an abrupt change of policy, China this month began dismantling the world’s strictest COVID regime of lockdowns and extensive testing, putting its battered economy on course for a complete re-opening next year.

Emergency department of a hospital in Beijing© Thomson Reuters

CHENGDU (Reuters) -Chinese hospitals were under intense pressure on Wednesday as a surge of COVID-19 infections strained medical resources, while the scale of the outbreak and doubts over official data prompted some countries to consider new travel rules on Chinese visitors.

In an abrupt change of policy, China this month began dismantling the world’s strictest COVID regime of lockdowns and extensive testing, putting its battered economy on course for a complete re-opening next year.

The lifting of restrictions, which came after widespread protests against them, means COVID is spreading largely unchecked and likely infecting millions of people a day, according to some international health experts.

The speed at which China, the last major country in the world moving towards treating the virus as endemic, has scrapped COVID rules has left its fragile health system overwhelmed.

China reported three new COVID-related deaths for Tuesday, up from one for Monday – numbers that are inconsistent with the experience of much less populous countries after they re-opened.

Staff at Huaxi, a big hospital in the southwestern city of Chengdu, said they were “extremely busy” caring for patients with COVID, as they have been ever since curbs were eased on Dec. 7.

“I’ve been doing this job for 30 years and this is the busiest I have ever known it,” said one ambulance driver outside the hospital who declined to be identified.

There were long queues inside and outside the hospital’s emergency department and at an adjacent fever clinic on Tuesday evening. Most of those arriving in ambulances were given oxygen to help with their breathing.

“Almost all of the patients have COVID,” one emergency department pharmacy staff member said.

The hospital has no stocks of COVID-specific medicine and can only provide drugs for symptoms such as coughing, she said.

Zhang Yuhua, an official at the Beijing Chaoyang Hospital, said most recent patients were elderly and critically ill with underlying diseases. She said the number of patients receiving emergency care had increased to 450-550 per day, from about 100 before, according to state media.

Nurses and doctors have been asked to work while sick and retired medical workers in rural communities were being rehired to help. Some cities have been struggling to secure supplies of anti-fever drugs.

In a major step towards freer travel, China will stop requiring inbound travellers to go into quarantine from Jan. 8, authorities said this week, prompting many Chinese, cut off from the world for so long, to check travel platforms.

But while online searches for flights spiked on Tuesday from extremely low levels, residents and travel agencies suggested a return to anything like normal would take some months yet, given worries about COVID and more careful spending because of the impact of the pandemic.

U.S. officials cited “the lack of transparent data, including viral genomic sequence data” as reasons for doing so.

India and Japan would require a negative COVID test for travellers from mainland China, with those testing positive in Japan having to undergo a week in quarantine. Tokyo also plans to limit airlines increasing flights to China.

The Philippines should be “very cautious” when receiving inbound travelers from China, its transportation minister said on Wednesday, adding the country was considering imposing testing requirements.

Asked about the travel requirements imposed by Japan and India, a spokesman for China’s foreign ministry said on Tuesday “COVID measures should be scientific, moderate and should not affect the normal flow of individuals”.

China’s $17 trillion economy is expected to suffer a slowdown in factory output and domestic consumption as workers and shoppers fall ill.

News of China re-opening its borders sent global luxury stocks higher, but the reaction was more muted in other corners of the market, as the world’s second-largest economy is likely to face subdued global demand in 2023.

U.S. carmaker Tesla plans to run a reduced production schedule at its Shanghai plant in January, extending the restricted output it began this month into next year, according to an internal schedule reviewed by Reuters.

Tesla did not specify a reason for the planned production slowdown.

Once the initial shock of new infections passes, some economists expect Chinese growth to bounce back with a vengeance from what is this year expected to be its lowest rate in nearly half a century, somewhere around 3%.