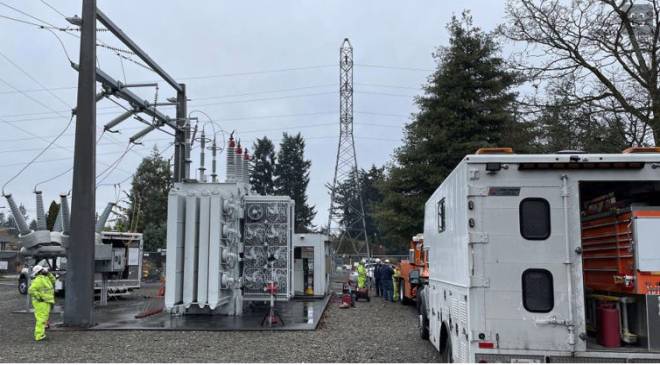 After thousands of customers in Pierce County, Washington, were affected Sunday when burglars vandalized three energy substations, power was then knocked out for even more homes after a suspect or suspects gained access to a fourth substation, vandalizing the equipment and causing a fire, according to an update from the Pierce County Sheriff’s Department.

Pierce County authorities tell CNN they have identified no motive or suspects in the attacks on Christmas Day.

Law enforcement cannot release any details about the extent of the damage or the way it was caused, Public Information Officer Sgt. Darren Moss told CNN. But whatever the exact damage that was inflicted, power was cut to around 14,000 customers, police said. It has been only weeks since another attack attack in North Carolina left thousands in the dark for days amid federal warnings of extremist threats to electricity infrastructure.

Tacoma Public Utilities said Tuesday afternoon it estimates power restoration by 2 p.m. PT, three hours later than initially anticipated, according to a tweet from the company.

“We know this has been a long couple days for our customers without power,” according to the tweet. While conducting final checks, our crews discovered another issue that must be fixed before deploying a mobile substation to restore around 650 customers.”

The Christmas Day vandalism near Tacoma marked more such incidents in the state, where two November attacks on Puget Sound Energy substations were investigated by the FBI. Vandalism and deliberate damage were reported last month at substations in southern Washington and Oregon.

No suspects are in custody in the latest case affecting Puyallup and Graham, Washington, and it “is unknown if there are any motives or if this was a coordinated attack on the power systems,” the Pierce County Sheriff’s Department said Sunday in a statement.

CNN has reached out to Tacoma Energy Utilities and Puget Sound Energy. CNN has also reached out for comment from the City of Tacoma as well as the Pierce County Emergency Management Department.

The FBI’s Seattle Division was aware of the vandalism reports but would not confirm or deny its role in any investigation, adding, “We do take threats against our infrastructure seriously and urge anyone with information to contact law enforcement,” it told CNN on Sunday.

The bureau in a November 22 bulletin warned of reports of threats to electricity infrastructure by people espousing racially or ethnically motivated extremist ideology “to create civil disorder and inspire further violence,” according to the alert sent to private industry.

Tacoma Public Utilities said Monday it expected all customers to have their power restored by the afternoon.

Nothing taken in holiday incidents

The first report of a burglary at a Tacoma Public Utilities substation came at 5:26 a.m. PT, the sheriff’s office said.

“Deputies arrived on scene and saw there was forced entry into the fenced area,” according to its statement. “Nothing had been taken from the substation, but the suspect vandalized the equipment causing a power outage in the area.”

Then, a second burglary was reported at another Tacoma Public Utilities substation, with forced entry and damage to equipment, the statement said. Similarly, nothing was taken.

“At 11:25 we were notified by Puget Sound Energy that they too had a power outage this morning at 02:39 a.m. Deputies are currently on scene at this facility where the fenced area was broken into and the equipment vandalized,” the statement continued.

Dispatchers received a call about a fire at another substation at 7:21 p.m. local time Sunday, the sheriff’s department said. Firefighters and Puget Sound Energy employees responded to the scene and were able to extinguish the fire and secure and the substation.

Power has since been restored to most of the affected homes, the update said.

Anti-government groups over the past two years have used online forums to urge followers to attack critical infrastructure, including the power grid. They have posted documents and even instructions outlining vulnerabilities and suggesting the use of high-powered rifles.

The attackers “knew exactly what they were doing,” Moore County Sheriff Ronnie Fields said at the time.

The resulting outages left some 40,000 customers scrambling as temperatures dipped to the mid-40s, with schools and businesses forced to close for days before power was restored.