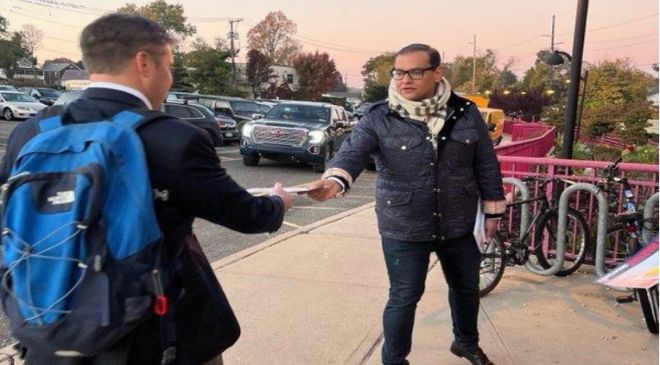 Dec. 27 (UPI) — Democrats are calling for incoming Republican House representative George Santos to resign after he admitted to “embellishing” his resume during the recent election cycle.

Santos, who was elected in November to represent New York’s third district, has been under scrutiny since The New York Times earlier this month reported a number of inconsistencies concerning his background, education and work history.

On Monday, the 34-year-old admitted to the New York Post that he never graduated from university, let alone from New York’s Baruch College as he claimed, nor did he work for Citigroup and Goldman Sachs, as he said he had.

“I am not a criminal,” he told the Post, while vowing to continue to serve his two-year term in the House of Representatives. “This [controversy] will not deter me from having good legislative success. I will be effective.”

He also added that he did not break any laws and that he is “not a criminal.”

“My sins here are embellishing my resume,” he said. “I’m sorry.”

Following his admissions on Monday, Democrats took to Twitter to call on Santos to resign from office.

“Just about every aspect of his life appears to be a lie,” Rep. Joaquin Castro, D-Texas, tweeted on Monday, while calling for Santos to be investigated by the authorities. “We’ve seen people fudge their resume but this is total fabrication.”

Castro added that Santos represents a threat to U.S. democracy, and if he is allowed to serve in Congress others who seek election will feel embolden to lie about their credentials and accomplishments to win office.

Rep. Ted Lieu, D-Calif., who has been calling on Santos to come clean since The Times report ran, also called on the Republican to step down over his “whopping lies.”

“If he does not, then [GOP House majority leader Kevin McCarthy] should call for a vote to expel,” he tweeted.

“[H]e should be banned from taking the oath of Congress,” he tweeted.

Other questions raised by The Times report include the $700,000 he lent his election campaign and claims made on his website concerning his Jewish heritage, specifically that his grandparents had fled Ukraine for Brazil during the persecution of the Jews during the second world war.

In the interview with the Post on Monday, Santos said he’s “clearly Catholic” and that he “never claimed to be Jewish.”

“Because I learned my maternal family had a Jewish Background I said I was ‘Jew-ish,'” he said.

Santos was elected to New York’s newly drawn third congressional district on Nov. 8, beating Democrat Robert Zimmerman with a vote share of 48.1% to 42.6%.

Zimmerman has yet to comment on Santos’ admissions, but had earlier called for him to be investigated by the House ethics committee, the Federal Elections Commission and federal prosecutors.

“The reality is Santos flat-out lied to the voters of #NY03,” he tweeted last week. “He’s violated the public trust in order to win office and does not deserve to represent #LongIsland and #Queens.”