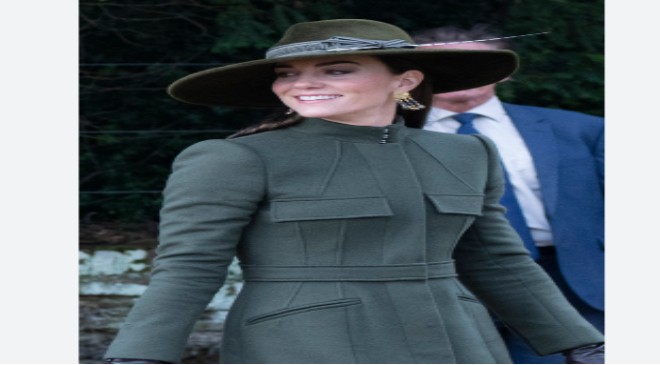 Looking festive! Princess Kate was a gorgeous sight at the Royal Christmas Church service in Sandringham on Sunday, December 25.

See Duchess Kate’s Most Stunning Fashion Moments of All Time

The Princess of Wales, 40, wore her Sunday Best of an olive-colored coatdress and matching wide-brimmed hat. Kate completed the look with a pair of brown leather gloves, a brown clutch and delicate golden earrings.

The Duchess of Cornwall was joined by her husband, Prince William, and their children — Prince George, 9, Princess Charlotte, 7, and Prince Louis, 4 — for the occasion. King Charles III — who honored William, 40, and Kate’s regal duties in his first-ever Christmas address — was also in attendance, as well as Queen Consort Camilla and other members of the royal family.

The holiday marks the family’s first Christmas without Queen Elizabeth II following her death on September 8 at age 96.

Buckingham Palace confirmed the royals’ holiday plans in a press release on Monday, December 19, per royal correspondent Omid Scobie. “Their Majesties The King and The Queen Consort accompanied by Members of the Royal Family will attend the Morning Service on Christmas Day at Sandringham Church on Sunday 25th December 2022,” the announcement read.

In previous years, the British royals spent the holidays at Elizabeth‘s Sandringham House in Norfolk, England, often visiting a country church to worship on Christmas Day.

Celebrating Christmas without the queen will feel “bittersweet,” a source told Us Weekly exclusively earlier this month. “[She] would not want them to mope or let that detract everyone from coming together and enjoying the occasion,” the insider added.

Sunday’s outing comes after the family stepped out for a holiday concert at Westminster Abbey in London, which was hosted by Kate on December 15. That evening, the Princess of Wales was a vision in a burgundy coat dress. The tailored number was finished with elegant gold buttons and squared shoulders. She paired the piece with coordinating maroon heels and a matching crocodile-embossed clutch. Charlotte matched her mom in the same hue and Kate’s sister, Pippa Middleton, followed suit in a wine-colored belted coat dress.

The event was the second annual Christmas carol concert sponsored by The Royal Foundation and was filmed to broadcast to the public on Christmas Eve. Kate organized the first musical soiree in 2021, dedicating the night to first responders who supported the country amid the COVID-19 pandemic.

It appears Kate, who was given her princess title after Her Majesty’s death, will be taking on more royal duties after Charles appointed the U.K. native as the new honorary Colonel of the Irish Guards. Kate takes over the role from William, who was given the honor by the queen in February 2011.

Also Read – After Years Of Trying For A Baby, Pregnant Woman’s Husband Left Her Weeks Before Birth — So Her Friend Organized A Life-Changing Gift

The 40-year-old Prince of Wales, meanwhile, is now the Colonel of the Welsh Guards as Camilla was appointed Colonel of the Grenadier Guards, a title previously held by Prince Andrew. (The late queen removed Andrew’s titles in January shortly before his sexual assault lawsuit.)