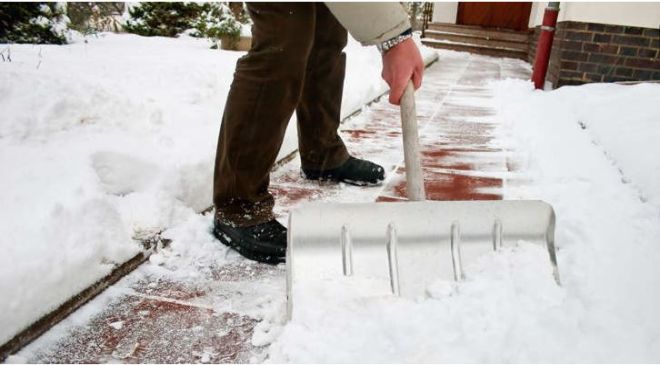 Nationwide, officials have attributed at least 18 deaths to the storm.

In Ohio, about 50 vehicles were involved in a pileup that killed at least 4. An 82-year-old woman was found dead outside of her assisted care facility in Michigan on Friday amid dangerously cold temperatures. And in the Buffalo, New York, area – which received stunning records of rain and snowfall on Friday – two people died in their homes after emergency responders couldn’t reach them amid the city’s historic blizzard conditions.

The winter weather’s dangers are often localized and not limited to snowfall. In New York, blizzard conditions created whiteouts and stranded motorists on the state’s western side while flooding prompted water rescues on the eastern side.

Meanwhile, bone-numbing wind chills extended throughout the country. Every state in the contiguous U.S. will experience minimum wind chills below freezing on Christmas or before, the weather service says.

Only a few regions in the U.S. are expected to escape bitter cold over Christmas — parts of California, Oregon, Arizona and Florida are among the few spots in the nation that won’t experience wind chills below freezing, the weather service predicts.

Other impacts from the storm kept accumulating Saturday. Power outage reports swelled up to some 1.7 million Saturday morning before falling significantly in the afternoon – and thousands of flights were canceled amid a busy holiday travel season.

“Severe weather across the country led to more than 20% of flights being canceled (Friday). Impacts continue today but FAA expects that the most extreme disruptions are behind us as airline and airport operations gradually recover,” U.S. Secretary of Transportation Pete Buttigieg wrote on Twitter Saturday.

Buttigieg also noted that “many Amtrak services have been canceled or delayed as well.” He cautioned those traveling by car this weekend to observe local warnings and weather hazards.

When will the winter storm be over?

Federal forecasters expect a huge mass of cold air to continue affecting the nation into next week. Those temperatures are a concern from the Dakotas to Florida even on Monday and Tuesday.

“Wind chills will still bottom out in the 20s and low 30s Monday and Tuesday morning for most locations in the South outside of south Florida,” a Friday forecast says.

But low temperatures are forecasters’ primary concern for most of the country by Monday. Flooding, rain and other hazards are only expected to affect more localized regions.

NY governor says storm is ‘one of the worst in history’; record Buffalo snow

Federal forecasters expect a huge mass of cold air to continue affecting the nation into next week. Those temperatures are a concern from the Dakotas to Florida even on Monday and Tuesday.

“Wind chills will still bottom out in the 20s and low 30s Monday and Tuesday morning for most locations in the South outside of south Florida,” a Friday forecast says.

But low temperatures are forecasters’ primary concern for most of the country by Monday. Flooding, rain and other hazards are only expected to affect more localized regions.

NY governor says storm is ‘one of the worst in history’; record Buffalo snow

New York Gov. Kathy Hochul described the snowstorm hitting western parts of the state, particularly the Buffalo area, as “one of the worst in history” at a press briefing Saturday morning.

Hochul, who issued a statewide State of Emergency that went into effect early Friday, also pointed to the storm’s impact on transportation hazards and emergency response. Every fire truck in Buffalo, she said, was stranded and stuck in snow as of Saturday morning.

“No matter how many emergency vehicles we have, they cannot get through the conditions as we speak,” Hochul said.

According to the weather service, Buffalo reported a daily snowfall of 22.3 inches Friday – almost doubling the old record of 12.6 inches set in 1976. The city also reported 1.98 inches of rain on Friday, surpassing the 1876 record of 1.73 inches.

“In Buffalo, this storm will likely at least jump near the top of the list of worst blizzards in the city’s history, if not even becoming the worst,” meteorologist Jake Sojda said in an AccuWeather article. “Four to 6 feet of snow will fall by Sunday and coupled with wind gusts approaching hurricane force (74 mph or greater) to create enormous drifts and impossible travel.”

“I’ve never seen the likes of this kind of storm,” Colleen Darby, 59, a lifelong resident of the area, told The Associated Press. “I can’t even get out of my house right now. The snow is up to my chest.”

Hochul said on Saturday that she will also ask the federal government for an emergency declaration, which would allow New York to seek reimbursements for the “extraordinary expenses” undertaken with overtime, mutual aid brought in from around the state and the deployment of crews responding to the unprecedented storm.

Travelers heading to airports on Christmas Eve are facing thousands of flight delays and cancellations.

FlightAware, an online tracker, reported Saturday as of 4:00 p.m. ET, more than 6,100 delays and over 2,600 cancellations for flights within, into or out of the U.S.

Also Read – Ask the Pediatrician: How can I decorate for the holidays safely with young children?

On Saturday, power outages impacted more than a million electric customers across the country, according to the website PowerOutage.us, which tracks utility reports.

In Tennessee and North Carolina, utility companies initiated controlled, temporary outages in efforts to save energy. Customers of Memphis, Light, Gas and Water and Duke Energy, for example, were impacted by these rolling blackouts Saturday morning.

Both companies confirmed that they were ending the temporary outages by mid-day Saturday. But similar action could still be taken in the future.

“The weather is still frigid and power demand may fluctuate. We are asking customers to be prepared in the event (the Tennessee Valley Authority) implements rolling blackouts. We could be required to do so at any time without notice. We are currently restoring power to all customers who are interrupted,” Memphis, Light, Gas and Water CEO Doug McGowen said in a statement issued at 11 a.m. CT.

Pennsylvania-based PJM Interconnection said that, due to the severe weather, power plants were having difficulty operating – asking residents in 13 states to refrain from unnecessary use of electricity. The major electricity grid operator also warned the 65 million people it serves across the eastern U.S. that future rolling blackouts might be required.

Authorities urge people to stay home in many areas

Michigan State Police on Friday warned travelers to stay off the roads.

“Most roads are icy and impacted by blowing snow, which is causing low visibility,” police posted on Facebook. “If travel is not necessary, please stay home.”

Some forecasters have said the storm’s danger doesn’t primarily come from the amount of snowfall — it’s a combination of snow, wind, ice and frigid temperatures that were particularly concerning in some areas.

“Don’t focus too much on the snow totals … Significant blowing and drifting will be occurring. Avoid travel!” the weather service in Buffalo said Friday afternoon.

What is the polar vortex?

According to the weather service, the polar vortex is a giant, circular area of rotating cold air and low pressure that surrounds both of Earth’s poles. In the U.S., focus remains on the North Pole’s polar vortex – because it impacts weather in the Northern Hemisphere.

People may only talk about the polar vortex when it sends frigid temperatures south of the Arctic – but it always exists, the weather service notes, its strength changing between seasons.

What is the polar vortex? In-depth look at how it can affect winter weather in the US.

When the polar vortex is stable and strong, it typically stays near the North Pole. But when it weakens or splits, frigid air can escape, funneling freezing temperatures farther south  to the U.S., Europe and Asia.

Also Read – Most of US to be ‘dangerously cold’ as holiday week winter storm spawns blizzard, whiteout conditions

What is wind chill?

Meteorologists define wind chill as how cold it feels while outdoors, and it’s based on the rate of heat loss from exposed skin caused by the wind-and-cold combination, according to the National Weather Service. Increased wind draws heat from the body, which then lowers the temperature of the skin and internal body.

“Frostbite may develop on exposed skin in as few as 10-20 mins, and hypothermia can quickly develop if you’re not dressed for the cold,” weather service experts in Chicago warned Thursday.