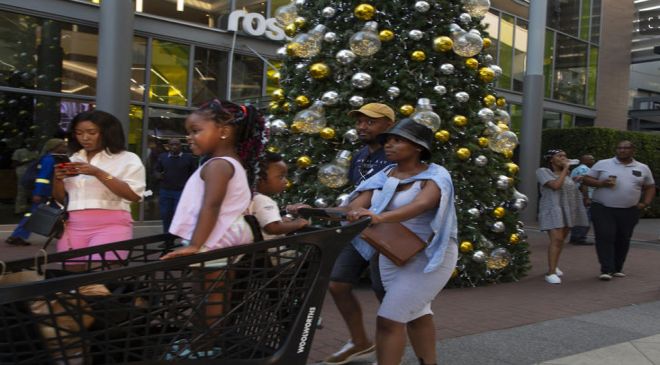 Then the lights go out. The shops are pitch dark. “Hold on to your wallets,” calls out a customer to rueful chuckles.

A long minute later the distant hum of a generator can be heard. The lights and music flicker back on and clerks resume ringing up purchases.

South Africa’s Christmas 2022 is a start/stop affair, with the country’s nationwide power cuts hitting just about every aspect of the holiday. Businesses and families are coping with rolling outages of electricity totaling seven to 10 hours per day.

The chugging of diesel generators can be heard at stores and restaurants from posh areas to townships. Patrons know to walk far around them to avoid the noxious fumes.

The festive calendar of celebrations with family and friends is now a meticulous dance around the daily schedule of power cuts. Holiday baking and video streaming are planned for when there will be power.

Most South African households now have a ready supply of solar lights, kerosene lamps and candles to keep from being in total darkness.

South Africa’s state utility, Eskom, has battled to meet the demand for electricity in the continent’s most industrialized economy for more than 10 years but the problem has become acute this year. A major problem is that the power company relies on an array of older coal-fired power plants that experience frequent breakdowns. Adding to the woes is a shortage of skilled technicians and corruption.

Eskom said this week that it has been forced to enforce its highest level of power cuts so far — Stage 6 — over the holiday period because of breakdowns at eight generating units. This is particularly surprising because there is reduced demand for electricity over the Christmas and New Year period as many factories and mines close during the holidays.

The power company’s failure to supply adequate electricity has put a damper on economic growth for years. Amid worsening power cuts, the chief of Eskom announced his resignation this month. President Cyril Ramaphosa’s failure to solve the country’s power problems was one of the most pointed criticisms of him last week at the national conference of his ruling party, the African National Congress.

At the busy Sandton City mall in Johannesburg, many shoppers watched the time so that they could be home in time to cook while they still had power.

“We have to look at the schedule … and then we can do everything that needs to be cooked. Or we use a gas stove. And we can lay the table outside, do the candlelights and it’s going to be beautiful,” said an optimistic Molalo Mishapo.

Natasha Singh, visiting Johannesburg from Durban, said she is fortunate not to feel the effects of the power cuts because the hotel where she is staying is equipped with generators.

“So we’re not feeling it that much at the hotel, fortunately for that,” she said. “But we … switch off and switch on about three or four times a day. That’s a bit hectic.”

Although 2022 has been a challenging year due to rising prices and continuous power cuts, it’s important for people to celebrate being healthy after living through the COVID-19 pandemic, said Cindy Naidoo.

“Coming from COVID … it’s a blessing, I think, just to be happy and healthy,” she said. “Forget about the lights and just live.”