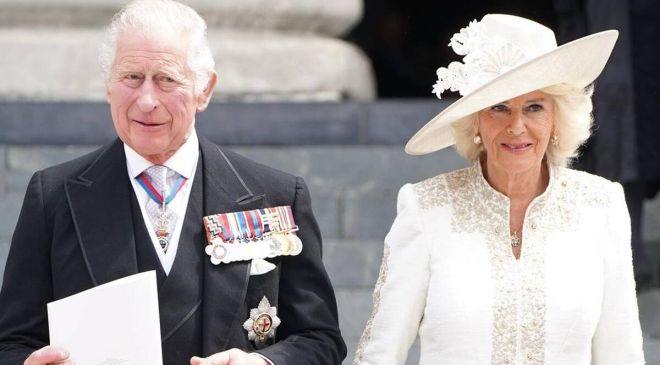 “It’s no wonder Charles and Camilla have such a toxic relationship,” said one Palace insider. “Their union is built on the bones of their previous marriages that they destroyed.”

“Camilla’s dad never liked or respected Charles — and even told him to leave her alone,” a source said. The shocking confrontation came in 1993, while Charles was still wed to Diana and Camilla was Andrew Parker-Bowles’ wife. Their forbidden affair was exposed after a series of kinky cell phone calls were intercepted and made public.

“At a private meeting, Shand scolded Charles for ruining his daughter’s life, reducing the prince to tears, said a source. “Shand ordered Charles to man up and show some honor and decency. He reminded the prince he was sleeping with another man’s wife, which was a disgrace to the monarchy and his role in the Church of England. He told Charles Camilla’s husband was the better man.”

Bruce died at 89 in 2006 and didn’t live to see how stormy and vicious his daughter’s second marriage has become,” said a source in 2019. “Charles and Camilla have been on the verge of a divorce for years,” said a source.

As RadarOnline.com previously reported, sources said King Charles was recently humiliated by Camilla after a racist incident at one of her events.

After Fulani accused Hussey of making racist comments, Hussey resigned from her position as a royal aide.

Sources said Charles was furious that Camilla did not address the matter at the event given she was close to both Hussey and Fulani during their conversation.