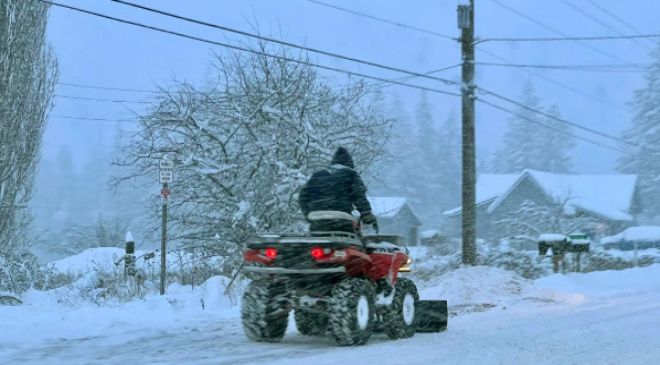 A blockbuster blizzard is set to spread a multitude of weather hazards – and holiday travel chaos – across the central and eastern United States to mark the winter solstice.

As a strong arctic cold front begins diving into the central Plains on Wednesday and the southern Plains by early Friday, forecasters warn temperatures could dip by 20 or more degrees within just a few hours.

More than 50 million Americans were under a wind chill warning Wednesday as brutal cold and dangerous wind chills threatened the northern Plains en route to the East Coast by Friday.

More than half of U.S. states are forecast to see some areas with minimum wind chill temperatures in the negative double digits, with the coldest regions bracing for wind chills below -50 degrees, according to the weather service. It amounts to “dangerously cold conditions across most of the country this week.”

Tempted to joke about global warming amid a blizzard?: Here’s what experts say about that.

Much of the eastern two-thirds of the country can expect heavy snow, damaging winds and even some heavy rainfall to accompany the extreme cold through the holiday weekend, according to the National Weather Service.

Here’s what to know about the pre-holiday storm:

What are the snowstorm’s expected impacts?

How will the snowstorm affect holiday travel?

As more than 112 million people prepared to travel at least 50 miles for the holidays, according to AAA, the storm – expected to rapidly intensify into what’s known as a bomb cyclone this week, essentially a winter hurricane – could create dangerous air and road travel, forecasters predicted.

Wind gusts over 50 mph and snow were expected to unleash blizzard conditions over the northern and central Plains through the Great Lakes, according to the National Weather Service. The combination could make for treacherous travel regardless of whether heavy snow is falling.

The National Weather Service warned of whiteout conditions on roads in the central and eastern U.S. where blizzards occur.

“Traveling in these conditions will be extremely dangerous, to at times impossible,” the National Weather Service said. “You risk becoming stranded and more vulnerable to the bitterly cold weather.”

The worst air travel delays Wednesday were expected in major hubs such as Minneapolis and Denver amid the increasingly potent storm, AccuWeather said. Plummeting temperatures also could create flash-freeze conditions on roads where standing water doesn’t dry quickly, according to the weather service.

A low-pressure system developing along the storm’s frontal boundary is expected to strengthen rapidly by Thursday night over eastern Michigan, the National Weather Service said.

The rapid strengthening could lead to record-breaking frigid temperatures over parts of the Gulf Coast and eastern U.S. by Friday, according to meteorologists.

“Across Montana, Wyoming, North Dakota, there are probably going to be some record lows set up there,” Kines said.

Meteorologists expect the most widespread weather hazard over the next few days to be related to the extremely cold air mass set to chill the central and eastern parts of the U.S.

Wind-chill values could drop as low as minus 70 degrees across the central High Plains, according to the National Weather Service. This level of cold could cause frostbite on exposed skin within minutes, hypothermia and even death during prolonged exposure, forecasters warned.

“We can’t tell people not to go outside, but your best bet is to stay indoors,” Kines said.