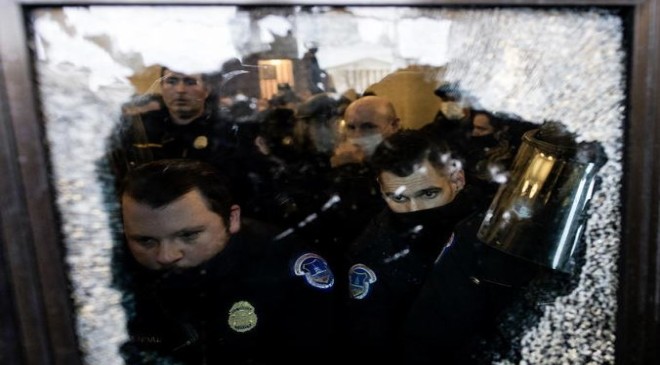 WASHINGTON — The Jan. 6 committee found that law enforcement agencies gathered “substantial evidence” of potential violence at the Capitol as Congress met to formalize Joe Biden’s victory, a member of the panel said during its final meeting on Monday.

But the executive summary of the committee’s final report does not address questions of why the FBI, U.S. Capitol Police and other law enforcement agencies didn’t do more to increase security that day.

The legislation that authorized the committee’s investigation into the riot tasked the panel to focus in part on the “facts and causes relating to the preparedness and response of the United States Capitol Police and other Federal, State, and local law enforcement agencies in the National Capital Region and other instrumentalities of government.”

As NBC News first reported last month, members of the congressional staff tasked with conducting that and other portions of the committee’s investigation were upset after they were informed that much of their work would be left out in favor of a narrative that focused only on the actions of former President Donald Trump.

The committee said it plans to release the full report later this week. A representative for the committee did not respond to a request for comment about the decision not to include more information about the role law enforcement played ahead of the Capitol attack.

Law enforcement officials were warned in the days, weeks and months before the Jan. 6 attack that then-President Trump’s rhetoric could result in violence, and specifically about the risk of a potential clash on Jan. 6 after Trump tweeted on Dec. 19, 2020, that the “Stop the Steal” rally planned for that day in Washington “will be wild.”

The son of the first Jan. 6 defendant to go to trial warned the FBI about his father on Christmas Eve 2020.

A member of the far-right Oath Keepers organization warned the FBI about the founder’s violent rhetoric in November 2020. Members of the Oath Keepers were on Capitol grounds for the rally that preceded the riot, with some entering the building, and several have been convicted of seditious conspiracy.

The committee’s executive summary discussed information that the FBI and other law enforcement agencies received in the days before Jan. 6, and said that some of that intelligence was shared with partners like the Capitol Police.

The summary argues that no one could have predicted Trump’s actions on Jan. 6, including instructing a crowd gathered near the White House to go to the Capitol after a speech in which he encouraged them to “fight like hell,” or they weren’t going “to have a country anymore.”

“No intelligence community advance analysis predicted exactly how President Trump would behave; no such analysis recognized the full scale and extent of the threat to the Capitol on January 6th,” the summary states.

It also suggests a full intelligence analysis ahead of Jan. 6 might not have been possible.

“Given the timing of receipt of much of this intelligence immediately in advance of January 6th, it is unclear that any comprehensive intelligence community analytical product could have been reasonably expected. But it is clear that the information itself was communicated,” it said.

David Laufman, a former top national security official at the Justice Department, said that the summary “should have included key findings on what law enforcement knew about threats of violence before January 6 and why more proactive action to interdict it wasn’t taken.”

Daniel J. Jones, the president of the nonpartisan group Advance Democracy, said that the report’s introduction was a “remarkable congressional document that clearly shows the role former President Trump played in inciting and encouraging the U.S. Capitol insurrection on January 6, 2021,” but that it left out an essential part of the story.

“By design, the report is silent on many key issues — including the question of why the Capitol Police and other law enforcement agencies failed to adequately prepare for the violence organizations like mine, and others, predicted in the days prior to January 6th. Understanding these failures is essential for the safety and security of our democracy going forward,” Jones said.

The FBI said in a statement to NBC News in August that the bureau “continues to evolve to combat persistent threats posed by domestic violent extremists” and that the bureau had increased their “focus on swift information sharing” with law enforcement partners after Jan. 6.

“We also have improved automated systems established to assist investigators and analysts in all of our 56 field offices throughout the investigative process. The FBI is determined to aggressively fight the threat posed by all domestic violent extremists, regardless of their motivations,” the FBI said at the time.

The Justice Department inspector general said in an annual report Monday that their investigation into the FBI and Justice Department preparations for and their response to Jan. 6 remains ongoing. A bureau official declined to comment on the committee meeting on Monday.

A former FBI informant who predicted in November 2020 that Trump’s false rhetoric about the election would lead to some “really, really bad s— happening” told NBC News on Monday that the FBI had a difficult task on the domestic terrorism front, but that there were certainly areas where the bureau could have improved.

“I think that people need to really understand what a tight line we walk. It’s an extremely tight line between people’s rights and the safety of the public,” he said.

But Fulton also thinks complacency may have set in at the bureau after years of violent rhetoric from right-wing extremists, often from the same actors.

“Were we forwarding our intel like we always do? Absolutely. But were we screaming from the rooftops? No. None of us were,” he said.