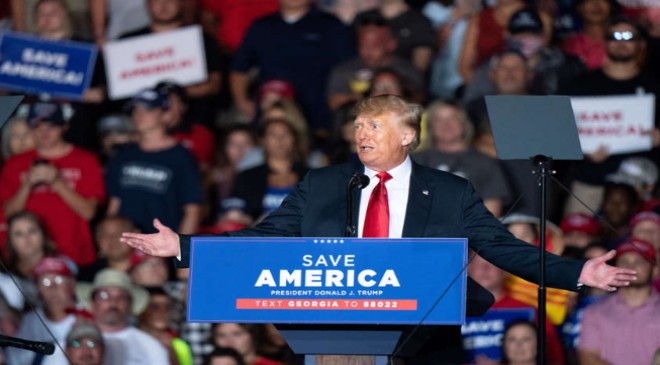 Donald Trump claimed Sunday that he turned down a prisoner swap deal with Russia which would have seen Viktor Bout, the notorious Russian arms dealer, traded for ex-US Marine Paul Whelan, a former U.S. Marine who has been in a Russian jail for four years.

Whelan, 52, is currently serving a 16-year sentence in Russia on espionage charges, which he denies. The U.S. says he has been wrongfully imprisoned in Russia since 2018.

He made the bombshell claim on Truth Social Sunday night, and continued to criticize the deal that saw WNBA star Brittney Griner freed from a Russian custody last week.

He originally blasted the deal shortly after it was announced, denouncing President Joe Biden and the administration for negotiating the release of Griner, who he said “hates our country.”

On Sunday Trump continued, claiming: “I turned down a deal with Russia for a one on one swap of the so-called Merchant of Death for Paul Whelan.”

However, according to the former U.S. president, he turned down the offer to free Bout – a former Soviet air force officer – and claimed he would have freed Whelan eventually. “I wouldn’t have made the deal for a hundred people in exchange for someone that has killed untold numbers of people with his arms deals,” Trump said.

Whelan’s Brother, David, took issue with Trump’s renewed interest in his brother’s case, tweeting on Friday: “Former President Trump appears to have mentioned my brother Paul Whelan’s wrongful detention more in the last 24 hours than he did in the 2 years of his presidency in which Paul was held hostage by Russia (zero). I don’t suggest he cares now any more than he did then (zero).”

The pair were “put on the table by the Russians,” Hill said, and made it “very clear that they had every intent of trying to swap Americans that had been wrongfully detained for individuals in the United States custody who were there for pretty good reasons.”

“This is all part of a political game for the Russian government.”

Hill claimed the swap was turned down at the time because “President Trump wasn’t especially interested in engaging in that swap.”

Whelan told CNN last week that while he was happy for Griner and her release, he was “greatly disappointed that more has not been done to secure my release, especially as the four-year anniversary of my arrest is coming up. I was arrested for a crime that never occurred.”

“I don’t understand why I’m still sitting here,” he said.