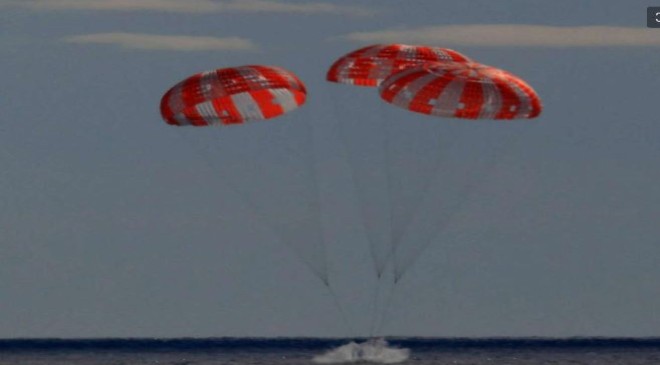 The Artemis I Orion capsule has splashed down after a 25-day trip that reached within 60 miles of the moon, completing the first step in an ambitious plan to establish a long-term presence there and later send a crewed shuttle to Mars.

The spacecraft spent 25.5 days in space and journeyed on a 1.4-million-mile journey around the Moon, according to NASA.

“Our spacecraft is home,” NASA tweeted at 9:41 a.m. PT Sunday, shortly after the splashdown occurred near Baja California, Mexico.

The mission, which overcame multiple launch delays, will return the unmanned capsule to Earth in the Pacific Ocean off the coast of San Diego.

The capsule has performed well throughout the nearly month-long trip, Mike Sarafin, Artemis I mission manager, said at a press conference on Thursday.

“We are on track to have a fully successful mission,” said Sarafin, who told reporters that the management team had met daily to track the capsule’s progress.MORE: How Hurricane Nicole impacted Artemis I rocket

As it returns to Earth, Orion will deploy parachutes that float it down into the ocean over its final descent, Judd Frieling, a NASA flight director, said on Thursday.

After Orion splashes down, it will remain in the water for two hours as NASA performs tests on the heat generated by the capsule upon its return, Frieling said.

Artemis had a rocky start with multiple failed attempts to get the rocket off the ground before the successful launch on Nov. 16.

The first launch attempt on Aug. 29 was scrubbed due to a faulty temperature sensor that indicated an engine hadn’t properly cooled down when it actually had.

The second attempt was subsequently scrubbed on Sept. 3 after engineers discovered several liquid hydrogen leaks. Liquid hydrogen is one of the propellants needed to fill the rocket’s core stage.

A third attempt on Sept. 27 was postponed after Hurricane Ian made landfall in southwestern Florida and gradually traveled to the northeastern part of the state as well as the Carolinas.

In total, the Artemis expedition includes four missions, each of which will cost roughly $4.1 billion. The project will cost up to $93 billion by 2025, according to an audit from the NASA Office of the Inspector General.

If Artemis I is deemed successful, Artemis II is scheduled to send four astronauts into space in 2024 for a lunar flyby before returning to Earth.

Artemis III plans to send four astronauts to the moon in 2025 including the first woman and the first person of color while Artemis IV plans to be the second lunar landing in 2027.

In addition to setting up a permanent base camp on the moon, the program aims to be the gateway to eventual human missions to Mars.