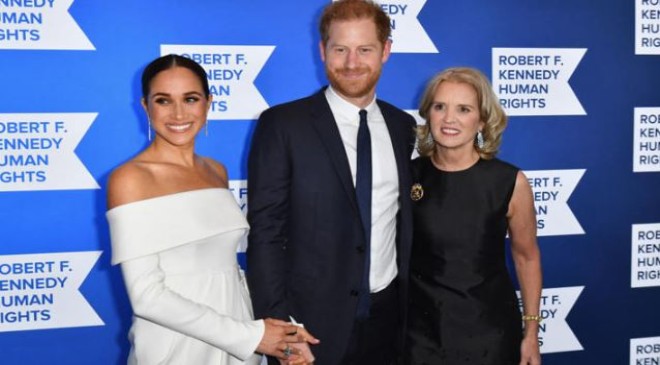 Prince Harry and Meghan Markle were fêted at a high society charity gala Tuesday night in New York City, smiling for the cameras despite a growing storm of anticipation for their Netflix series “Harry & Meghan,” which is set to drop Thursday. According to reporters on the scene, including the Daily Mail and The Sun, the couple “refused” to speak to media and answer questions surrounding the recent controversy.

The pair were honored as “Ripple of Hope” laureates by the Robert F. Kennedy Human Rights Organization, a recognition they received as a result of their “heroic” stand against racism in the royal family. Former President Barack Obama, Joe Biden and Bill Clinton have all been previous recipients.

“They went to the oldest institution in U.K. history and told them what they were doing wrong, that they couldn’t have structural racism within the institution, that they could not maintain a misunderstanding about mental health,” Kerry Kennedy, president of the organization that bears her father’s namesake, said last month of the reason it chose to honor the Sussexes.

“They knew that if they did this there would be consequences, that they would be ostracized, they would lose their family, their position within this structure, and that people would blame them for it. They have done it anyway because they believed they couldn’t live with themselves if they didn’t question this authority. I think they have been heroic in taking this step.”

Meghan was all smiles as she and her husband arrived at the event Tuesday night to the machine-gun fire of cameras. She donned a white, off-the-shoulder dress for the occasion that bore a striking resemblance to one worn last week by her sister-in-law Kate Middleton, who was also on the East Coast Friday to accept her own award at Boston’s Earthshot gala.

Tuesday night’s awards were hosted by fellow tabloid punching bag Alec Baldwin, whose on-set shooting of “Rust” cinematographer Halyna Hutchins, 42, still looms large. When asked about Harry before the gala, Baldwin even said he admired how the Prince “handles difficult circumstances with the press without having too much difficulty.”

The gala also comes as palace insiders remain on tenterhooks for the widely anticipated release of “Harry & Meghan” later this week. The pair are expected to make several bombshell claims in the show, including that they were the victims of racism and bullying perpetrated by other members of the royal family—and ultimately that they were victimized by the British press without proper defense from the palace, according to Page Six.

But a number of eagle-eyed Royal watchers noticed some discrepancies in trailers for the show that led to mockery—including paparazzi shots used to illustrate the constant hounding endured by the couple, which actually turned out to be images from a “Harry Potter” premiere.