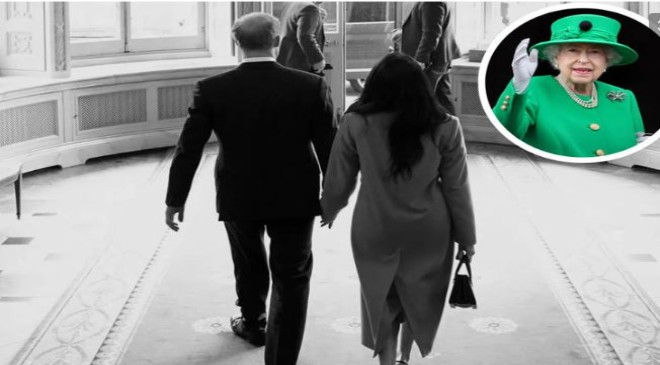 Prince Harry and Meghan Markle broke royal protocol by bringing a photographer into Buckingham Palace without getting permission from the late Queen Elizabeth II, The Telegraph reports.

After the first trailer for the Duke and Duchess of Sussex’s upcoming docuseries “Harry & Meghan” dropped on Thursday, the publication reported that one of the images of the couple shown in the minute-long clip was snapped at the palace in March 2020. By then, Harry and Meghan had already stepped back from their roles as senior members of the royal household.

Nevertheless, they still would’ve had to abide by royal rules regarding photography and filming within Buckingham Palace. According to Hannah Furness’ reporting in The Telegraph, the couple did not seek permission from Queen Elizabeth II, who died in September, to commission the photo of themselves holding hands and walking toward a door within the monarch’s residence.

Neither Buckingham Palace nor representatives for the Duke and Duchess of Sussex immediately responded to Insider’s request for comment.

At the time, Harry and Meghan’s decision to bring a photographer with them to Buckingham Palace was the subject of a written palace complaint, the publication added.

According to the regulations outlined by the Royal Collection Trust, there is “strictly” no photography or filming allowed inside Staterooms at Buckingham Palace. Additionally, any filming or photography within the palace for commercial purposes, meaning it is producing content for a market audience with the intent of making an income, requires permission.

Harry and Meghan are said to have signed deals with Netflix worth well over $100 million,

It’s not the first time that filming and photography for their upcoming docuseries, which is reportedly set to be released on December 8, has caused a stir.

During the Platinum Jubilee celebrations in June, multiple outlets were reporting that a Netflix crew had been barred from filming the couple during official royal events, according to The Evening Standard.

How many more intimate photos from the couple’s private life, before and after they stepped back from their royal duties, remains to be seen as viewers will have to wait for Netflix to drop docuseries.

That said, there will likely be plenty of content as royal commentator Omid Scobie tweeted that it will be a six-episode series.