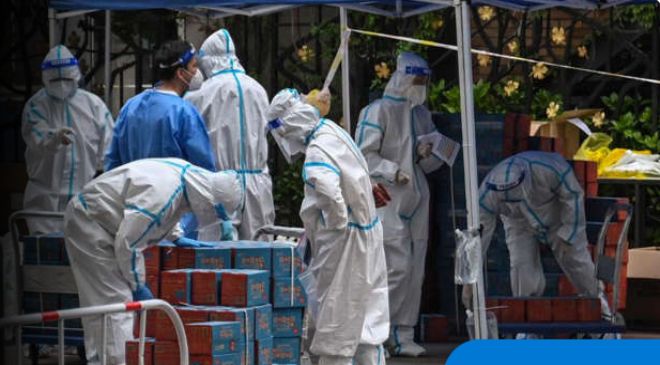 For nearly three years, the Chinese government deployed its considerable propaganda apparatus to fan fears about Covid to justify large-scale quarantines, frequent mass testing and the tracking of more than a billion people. As the authorities now shift their approach to the pandemic, they face the task of downplaying those fears.

Until the past week, during which there were rallies voicing extraordinary public opposition to the stringent “zero Covid” rules, government officials and state media were still emphasizing the most ominous medical news about the pandemic. There were countless stories about the high death toll suffered elsewhere — especially in the United States — and about the months of respiratory problems, cognitive impairment and other difficulties associated with long Covid.

The official newspaper of the Communist Party, People’s Daily, warned on Nov. 15 that any loosening of Covid measures would endanger the lives and health of the Chinese people: “The relaxation of prevention and control will inevitably increase the risk of infection of susceptible groups.”

Just a week and a half ago, the vice premier overseeing the government’s Covid responses, Sun Chunlan, said that “anyone who should be tested must be tested, and no one should be left behind.”

But as local governments now hurry to dismantle testing requirements and start hauling away curbside test booths, Ms. Sun changed tack on Wednesday. “China’s pandemic prevention faces a new situation and new tasks, given the weakening severity of the Omicron variant,” she said.

China faces a challenging moment in its pandemic response, experts say, in large part because of muddled messaging. The government has failed to take many proven public health measures, such as aggressive campaigns for full vaccination, leaving many citizens of the world’s most populous nation at risk.

China’s top leader, Xi Jinping, had personally affirmed that sacrifices were needed to stop the spread of Covid. “It would be better to temporarily affect a little the development of the economy than to let the people’s life, safety and health be harmed,” he said in June.

Beijing is now rapidly moving to lighten the burden of Covid restrictions. Some neighborhood committees are beginning to let residents stay home if they or their family members are infected, instead of transporting them to makeshift hospitals, vast stadiums or long rows of shipping containers, standard procedure since the early months of the pandemic. Chengdu, Guangzhou, Tianjin, Beijing, Chongqing and Shenzhen have all lifted requirements in the past several days for residents to show negative Covid tests before taking the subway or entering other public places.

Yet allaying Covid worries bordering on terror among millions of people, particularly older residents, is proving a challenge for the Communist Party and state media. Further complicating matters is that China’s leaders have a long history of not wanting to look as though they are reversing policies because of public anger.

Throughout the government’s unbending response, the country has struggled to adequately vaccinate some of its most vulnerable: Of people ages 80 and older, two-thirds have done the initial course of vaccinations, usually two doses, but only 40 percent have received a booster dose.

International scientists say that three of China’s vaccines are needed to achieve protection comparable to two mRNA vaccines in the West.

Missing from the state media’s new reporting about Covid has been any mention of the recent days’ protests. The coverage has shifted to research by Chinese scientists that the Omicron variant may not be as dangerous as earlier versions of the virus.

Southern Daily, a state-controlled newspaper in Guangzhou, published on Saturday a report emphasizing a municipal estimate that 90 percent of Omicron infections were asymptomatic. Citing interviews with seven leading Guangzhou doctors, the newspaper also reassured readers that symptomatic cases were seldom serious, except among elderly, unvaccinated residents.

Many other countries have found Omicron to be less deadly but more infectious. There have been nearly 7 million confirmed deaths of Covid worldwide, while China says that it has suffered just over 5,000 deaths.

On Thursday, Global Times, another Communist Party publication, quoted a doctor at Sun Yat-sen University in Guangzhou who questioned the existence of long Covid, a complex cluster of post-infection symptoms, sometimes debilitating, that has been chronicled extensively by U.S. government epidemiologists.

“There are no confirmed sequelae of Covid-19,” said Dr. Chong Yutian, using a medical term for lingering consequences after an infection or injury. Dr. Chong did not respond to a request for comment.

Guiding public opinion in a new direction will not be easy for China, because state media had effectively suppressed any suggestion that Covid might be manageable.

“Until recently the experts were all geared to supporting the policy against Covid,” said Dali Yang, a political scientist at the University of Chicago. “The media is suddenly going all the way in the direction that the virus has mutated and is less pathogenic.”

Better communication, including on the importance of vaccination, is essential for China to manage its emergence from Covid restrictions, said Jin Dongyan, a Hong Kong University virologist. Many in China are still so afraid of the virus that they may stay home from even grocery stores as the country begins to open up, which could cause further economic harm, he warned.

“To educate the general public is really important, and that’s what they need to strengthen, because right now the public is confused and divided,” he said.

Jiang Sigui, 60, a corn farmer in Guangxi, an impoverished region in southernmost China, said that he worried that the easing of “zero Covid” restrictions would lead to a wave of infections that could overwhelm rural villages like his, with limited health care facilities. He fears for his ability to continue raising his grandchildren if he falls ill.

“I support the fight against Covid,” he said. “Right now, I’m at home, raising children. I definitely worry about the virus — who doesn’t?”

Yet many young and middle-aged residents of China do appear to be less afraid of Covid than they are troubled by the restrictions that China has imposed to control its spread. That sentiment became apparent in the recent protests.

China has halted almost all international travel during the pandemic and wields ever stricter censorship of the internet, including an almost complete block on access to foreign websites. Many of the protests took place in coastal provinces where residents often have the internet tools to see overseas websites that show them how the rest of the world has adjusted to life with Covid.

Yet interviews with people in Lanzhou, a provincial capital in western China, indicate that a desire for a shift in Covid policy has reached China’s huge interior as well.

Zhang Zechen, a 20-year-old university student, said that she had been confined to her dorm under lockdown for much of the past semester. The university required her to have a PCR test every fourth day. When the university offered students the chance to leave a month early for Lunar New Year celebrations, to reduce the risk of transmission, she jumped at the chance.

A 24-year-old migrant worker said that he was infected with Covid last September while working in Tibet, but found that the only symptoms of his illness were a few days of coughing. He was critical of policies like locking residents in their homes for weeks, sometimes corralling more than a million people, after even a handful of cases.

“A lockdown should never be expanded to a whole district, affecting people’s normal travel and work,” said the worker, who gave only his family name, Ma, in discussing his personal health.

Yet even as China adopts a more reassuring stance about the dangers of Covid, many experts urge caution. They contend that the government has not yet done enough to vaccinate the elderly, prepare hospitals and educate the public.

“If they unroll all the restrictions too quickly, it’s probably going to lead to a large number of cases and economic disruptions,” said Andy Chen, a public health analyst in the Shanghai office of Trivium China, a consulting firm.