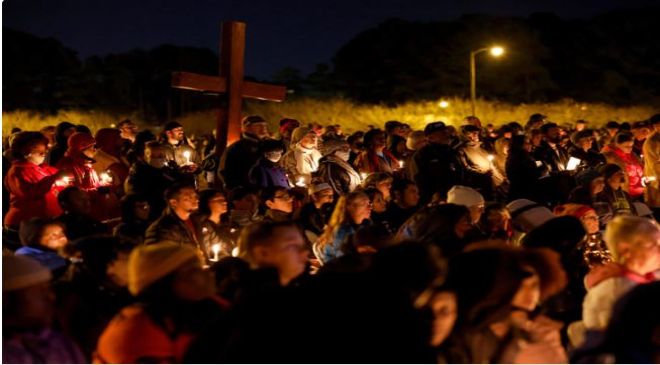 CHESAPEAKE, Va. – Monica Atkins understands her community’s grief and anger in her bones.

Atkins, 49, lost a son to gun violence in 2014 – and in the last week, she watched it engulf the Virginia city where she lives, a place still reeling and raw. One week earlier, a gunman at a Chesapeake Walmart killed six employees and made this city – for a moment – the scene of America’s latest deadly mass shooting.

Across the municipality of about 250,000 near Norfolk, which includes middle-class suburban neighborhoods and extends into the Great Dismal Swamp, the fallout has unspooled in all-too-familiar scenes.

A mother mourning her son. A survivor grappling with searing trauma. Candlelight vigils. Calls for, and against, stricter gun control. Vows to address a mental health crisis. A search for an assailant’s motive. Allegations of missed warning signs.

On Tuesday that included a $50 million lawsuit filed by a worker who survived the attack and accused the company of continuing to employ the shooter – a store supervisor – after a complaint of “disturbing and threatening behavior.” Walmart said it was reviewing the filing.

For some, the latest attack only deepened frustration over society’s failure to stem the relentless, yearslong drumbeat of shootings in schools, colleges, churches, groceries, bars and businesses.

For others, it added a fresh layer of anxiety over their safety in everyday places.

“It’s mind-boggling,” Atkins told USA TODAY. “You have to look at everybody, size them up. You don’t know who to trust anymore.”

But while mass shootings may feel tragically routine at the national scale, that doesn’t blunt the impact up close, said Bishop Kim Brown of the Mount Global Fellowship of Churches.

“We’re not the typical midsize city. We’re kind of a bed-and-breakfast city. So it has kind of rocked us,” Brown said. “I think sometimes you can be lulled into a place of complacency. That it couldn’t happen here.”

On a chilly and dark Monday night in a Chesapeake city park, about 200 residents joined local and state leaders at a candlelight vigil meant to offer solace to a hurting community.

Mayor Rick West, who said the city was facing its “darkest hour,” promised the families of the victims that the city would support them.

One speaker shared details of the six victims, all employees of Store #1841. Randy Blevins, 70, was a hockey fan who loved spending Thanksgiving with his family. Brian Pendleton, 38, didn’t drive but was never late for work. Tyneka Johnson, 22, had a room-lighting smile.

Kellie Pyle, 52, was a doting grandmother. Lorenzo Gamble, 43, was a quiet and reserved father of two. Fernando Chavez-Barron was just 16 – an honors student who loved to read and got his job to lessen the burden on his family.

Some residents at the vigil, who held candles in the park’s amphitheater, described how they felt with words like “broken” and “devastated.”

At another church memorial service a day earlier sponsored by the Chesapeake Coalition of Black Pastors, the crowd included people who had lost someone, knew someone who was wounded or worked at the store.

Linda Gamble, Gamble’s mother, said she hasn’t been able to do much of anything, including eat, because she misses him so much, according to The Associated Press.

“It’s been really hard because I never, ever in a million years thought it would be my baby,” Gamble said. “He’s gone, but he will always be in my heart.”

Plenty of other residents with no direct connection to victims or workers were deeply rattled, especially those who shopped regularly at the store.

Matt Nettesheim, 47, a Baptist pastor, said he lives 2 miles away. He guessed he had shopped at that Walmart a hundred times. “I thought, ‘Man alive, this is happening in our town, our city.’”

The attack came nine days after Virginia faced another major shooting when three University of Virginia football players were shot to death on a charter bus. It also followed a shooting at a Colorado Springs LGBTQ nightclub that killed five people.

Katrenia Washington, 53, who works in law enforcement, said the shooting in her town “was just so close to home. It hit hard,” particularly over the Thanksgiving weekend that followed.

“I just felt like just I was watching the news over and over again,” she said. “I felt like I just wanted to scream.”

Police say a store supervisor, Andre Bing, 31, bought a 9mm handgun at a local shop and used it to open fire in the Walmart break room. After the rampage, he died from an apparently self-inflicted wound.

“I’m not alone in concluding that we have a mental health and a behavioral health crisis in the United States,” Youngkin said.

Police say a “death note” was found on the assailant’s phone, its author claiming he was “harassed” and “laughed” at by people, later referencing a “management team” and “associates,” but also suggesting he was “led by Satan.”

But Democratic state Sen. Mamie Locke, who represents the area, said in an interview that boosting mental health services must be accompanied by stricter gun safety legislation – an issue that has long drawn heated debate in Virginia.

In 2020, Virginia Democrats held the statehouse and governorship and passed several new firearms laws in that year and the next, such as requiring background checks on all sales and adopting a “red flag” law meant to limit access for those who may pose a threat.

Locke said more are needed. Like most states, Virginia does not require a waiting period between the time of purchase and the actual physical transfer of a firearm. Police said Bing bought the gun on the same day as the shooting.

“To have a governor stand up and say that is all about mental health – and never mention the word ‘gun’ – you know, it’s insane,” she said. “This is a gun problem, too. And we have to work on both issues.”

That debate also was reflected among residents here. Lori Boone, a retired physical therapy assistant, said she thought it wasn’t necessarily a problem of gun violence. “It’s mental health,” she said. “It really is.”

But Amber Bowmer, 42, a substitute teacher who is a member of gun safety group Chesapeake Moms Demand Action, argued that mental health treatment was only “one component” of the solution.

Whether new spending to expand care will be approved by the Legislature is far from clear. And Locke said new gun legislation probably faces an uphill battle with the Republican majority in the state’s House of Delegates and a Republican governor.

In Chesapeake, Brown said there’s encouraging talk of civic, faith and nonprofit groups collaborating to seek out solutions that could help prevent such attacks – though there were few concrete details.

“I think it has the potential to really do something in the city, drawing people together. And that’s what’s starting to happen right now,” he said.

The city’s Walmart store, meantime, remains closed. Randy Hargrove, a Walmart spokesperson, said in a statement that the company was “supporting all our associates with significant resources, including counseling.” Walmart also was helping families with travel and funeral expenses.

“The entire Walmart family is heartbroken by the loss of the valued members of our team. Our deepest sympathies go out to our associates and everyone impacted, including those who were injured,” he said.

As for Atkins, she turned the grief over her son into an anti-violence nonprofit, Stop the Violence 757, whose work in regional areas such as nearby Norfolk includes teaching young people to resolve conflict and process anger. She hopes that helps now more than ever.

Though she’s not yet sure how the attack might change Chesapeake, Atkins said one thing is sure: that national attention would soon fade as soon as the next mass shooting in America.

So far this year, 202 people have died in 40 mass killings across the nation – defined as an incident in which four or more people are killed, not including the perpetrator – according to a database maintained through a partnership among USA TODAY, The Associated Press and Northeastern University. Seven of those 40, including the Chesapeake tragedy, were shootings in public places.

Mass shootings, when four or more people are shot, are even more frequent.

By this week – after an attack at Florida A&M University left four people wounded and one dead – Chesapeake was no longer the scene of America’s latest deadly mass shooting.

“You don’t have enough time to process, because something else happens,” Atkins said. “It’s a revolving door.”