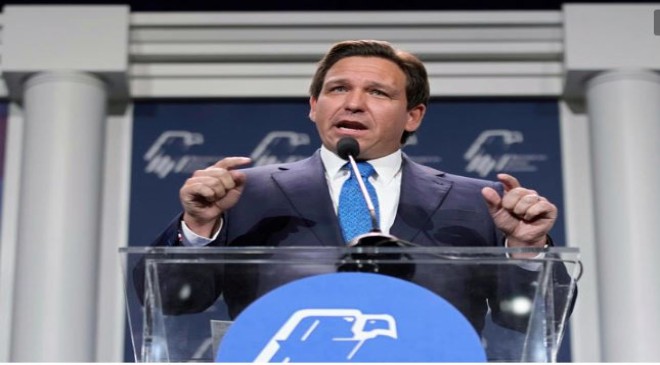 Florida is yanking $2 billion worth of state assets managed by BlackRock, escalating the GOP standoff with the world’s largest money manager over its ESG investment policies.

The state treasury will freeze about $1.43 billion worth of long-term securities and remove BlackRock as the manager of about $600 million worth of short-term overnight investments with the goal of giving that business to other money managers by the beginning of 2023, Florida Chief Financial Officer Jimmy Patronis said in a statement  Thursday.

Republicans, who say liberals are using environmental, social and corporate governance investing strategies to advance an ideological agenda that would be voted down at the ballot box, have lashed out at “woke” corporations and money managers, pledging to roll back the $40 trillion ESG investing business.

Florida Gov. Ron DeSantis is a key figure in the Republican revolt and BlackRock CEO Larry Fink is a frequent target.

In August, DeSantis, widely expected to challenge former president Donald Trump for the 2024 GOP presidential nomination, pushed through a resolution calling for Florida to stop considering “the ideological agenda” of the ESG movement when investing state funds.

“I need partners within the financial services industry who are as committed to the bottom line as we are – and I don’t trust BlackRock’s ability to deliver,” Patronis, who oversees the Florida Department of Financial Services that manages about $60 billion in taxpayer money, said in a statement.

“I think it’s undemocratic of major asset managers to use their power to influence societal outcomes. If Larry, or his friends on Wall Street, want to change the world – run for office. Start a non-profit. Donate to the causes you care about. Using our cash, however, to fund BlackRock’s social-engineering project isn’t something Florida ever signed up for.”

Treasurers from Louisiana and Missouri have made similar moves.

“As a fiduciary, everything we do is with the sole goal of driving returns for our clients. We are surprised by the Florida CFO’s decision given the strong returns BlackRock has delivered to Florida taxpayers over the last five years,” the firm said. “We are disturbed by the emerging trend of political initiatives like this that sacrifice access to high-quality investments and thereby jeopardize returns, which will ultimately hurt Florida’s citizens.”

Conservatives are going after corporations that have become more vocal on social, environmental and governance issues, commonly known as ESG.

ESG investors consider a company’s performance on environmental and other issues when weighing an investment. ESG proponents say this type of investing highlights risks such as climate change exposures or workforce diversity and inclusion issues that might be otherwise overlooked.

But the GOP sees ESG as a trojan horse for left-wing politics. In recent months, Republicans have intensified their pressure campaign to stop corporate America from taking liberal stands, with punitive measures ranging from boycotts to legislation to shareholder fights.

Now that Republicans will regain control of the House of Representatives in January, conservative lawmakers are threatening political consequences including hauling money managers to congressional hearings on ESG.