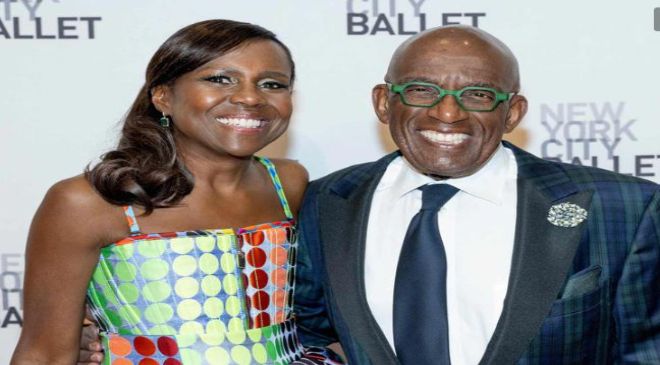 The couple first met at Today in 1990 and tied the knot five years later. Since then, they’ve celebrated several milestones together, including gracing the cover of PEOPLE’s first-ever Love Issue in February 2021.

“He’s a real romantic,” Roberts said of her husband. “When I travel, I open my suitcase and I find one or two notes in there that he’s slipped in, or in my purse. ‘Have a great day. I’m thinking of you.’ Or an Emily Dickinson sonnet or something. And I’m just like, ‘Oh my gosh.’ It just touches me. And he thinks that way all the time.”

Later that year, the couple celebrated their 26th wedding anniversary. Roberts shared a touching tribute on Instagram, writing, “The sumptuous journey began 26 years ago today. It has been a true and delicious adventure. Ups. Downs. Better. Worse. Coasting … joyriding. And holding on tight along the way. So thrilled to share this full life with you @alroker Happy anniversary dear ❤️. Here’s to so many more!”

Here’s everything to know about Al Roker and Deborah Roberts’ relationship.

Roker and Roberts met in 1990 when Roberts joined NBC’s Today as a correspondent. “Al was so sweet,” she told PEOPLE in 1999. “He showed me pictures of his daughter and talked about his family.”

Although they met two years earlier, Roker and Roberts didn’t go on their first date until 1992. (Roker was previously married to his first wife, Alice Bell, from 1984 until they separated in 1992).

The Today anchor later explained how he landed a date with Roberts on The Kelly Clarkson Show, sharing that Roberts had asked him to keep an eye on her apartment while she was in Barcelona covering the Summer Olympics for NBC.

“A day before she got back from her trip, I stocked her pantry, I stocked her refrigerator and left some flowers on the table and a note, ‘Welcome home,’ ” Roker said. “And then I got my first date with her a week later.”

The weathercaster proposed to Roberts on Jan. 1, 1994. He recalled the proposal to PEOPLE, saying, “Deborah was getting a little annoyed that it hadn’t happened over the holidays. We had a chat, ‘So when will this happen?’ And I said, ‘Before Groundhog Day.’ “

He kept his word, proposing to her on New Year’s Day during a business trip to Arizona as they were staring off into the Grand Canyon. “I thought, what a great place,” he said. “On the rim of the Grand Canyon. And if she says, ‘No,’ one of us isn’t coming back.”

The couple wed in front of family and famous friends at Manhattan’s St. Thomas Episcopal Church, with Barbara Walters and Katie Couric among the guests.

In September 2020, Roker shared a video on Instagram from the couple’s wedding day. “A #happy25thanniversary to @debrobertsabc who helps me a better #father #brother #person and challenges me to do better each and every day. #thankyou and #iloveyou,” he captioned the video.

The pair welcomed daughter Leila Ruth on Nov. 17, 1998. Leila was the first child for Roberts and the second for Roker, who shares daughter Courtney from his previous marriage.

Roker and Roberts welcomed their second child, Nicholas Albert, on July 18, 2002. Nicholas (who goes by Nick) was later diagnosed with autism.

On Dec. 14, 2018, Roberts shared a selfie of her, Roker and their son Nick on Instagram to commemorate the 40th year of Roker working at NBC. “40 years at NBC @alroker How’s it possible??!! Congrats dear heart!!” she captioned the photo.

“Do I get frustrated with my son sometimes? You bet,” Roker wrote in a personal essay. “But then I remember my dad, how understanding he was. And Deborah reminds me that I have to show my son not only that I love him but that I like him as well. More than that, I admire him.”

The couple shared their love for each other on social media to celebrate their silver anniversary, with Roberts writing, “It couldn’t possibly have been 25 years ago. Could it?? 25 years of love, laughter, peaks, valleys, discovery, bewilderment, bliss, struggle and all that this journey offers.”

Roker also shared a tribute on his Instagram: “A #happy25thanniversary to @debrobertsabc who helps me a better #father #brother #person and challenges me to do better each and every day. #thankyou and #iloveyou,” he said alongside a clip from their wedding video.

Roker shared on the Today show that he was diagnosed with prostate cancer.

“It’s a good news–bad news kind of thing,” he said. “Good news is we caught it early. Not-great news is that it’s a little aggressive, so I’m going to be taking some time off to take care of this.”

Roker shared that Roberts was not at the appointment when he was diagnosed.

“I feel badly because I didn’t tell Deborah to come with me,” he said. “In hindsight, boy I wish I’d told her to come. … She was upset. And once she got past that, the reporter in her kinda took over. And then she’s been at everything ever since.”

Roker shared on Instagram on Nov. 12, 2020, that he underwent surgery for prostate cancer and that he was home recovering.

“Relieved to let you all know that my #prostatecancer surgery is done and back home. A big shoutout to everyone at the #josierobertsonsurgerycenter and so appreciate all the thoughts and wishes from our viewers and the wonderful care packages from my co-workers. Hope to see you all soon,” he shared on Instagram.

Roberts also added on her Instagram, “Let the healing begin. I am so in awe of this guy and his indomitable spirit. So blessed and grateful for avalanche of love, prayers and support for @alroker #gratitude.”

One week after his prostate cancer surgery, Roker shared on Today that his pathology report found no evidence of cancer beyond the prostate.

“It was this great relief,” Roker told Today. “For a first start, this is terrific news. I’m going to be up for — and a lot of people who live with cancer — up for lifelong testing to make sure this doesn’t come back.”

The couple shared more about their marriage and their 25th wedding anniversary in an interview for PEOPLE’s first-ever Love Issue.

“He does things like he sprinkles little love notes, little cards throughout my life,” Roberts explained of her husband’s romantic gestures, adding, “Sometimes there’s a little card next to the coffee maker that might say something encouraging or sweet or impish or fun.

Roberts and the Today co-host love to cook, and they started sharing their culinary quests with their followers on Instagram. The day after Valentine’s Day 2021, the couple hosted an Instagram Live event where they prepared a roast chicken together.

May 11, 2021: Al Roker and Deborah Roberts share how they dress up for virtual events

“Party on the top … bedtime on the bottom. It’s how @alroker and I attend virtual events these days. Gonna miss these comfy, secret, chill WFH moments as we step back into the world. 😉 What habit from 2020 are you reluctant to let go of? #tuesday thoughts,” Roberts captioned her Instagram photo.

Roker and Roberts’ daughter Leila graduated from college in May 2021. Roberts celebrated the accomplishment on Instagram with a photo of the couple smiling with their children. “It’s a day we have dreamed of and cannot believe is here. Bursting with pride doesn’t begin to describe how we feel about our sweet little girl who has become a young woman and now college graduate,” she captioned the post.

March 30, 2022: Deborah Roberts reveals how the pandemic brought her closer to Al Roker

Two years into the pandemic, Roberts discussed with PEOPLE how the experience impacted her relationship with Roker.

“We weren’t used to this extended kind of 24/7 time together and [we] felt listless,” she shared. “There was tension at first as we settled into this new reality.”

Roberts added, “It was a reminder of my own romantic journey with my husband and how we formed a tighter and more precious bond during the last 24 months. I marveled at how Al jumped in to take care of me and his family and I fell deeper for him. … And seeing other couples feel this was validating.”

May 22, 2022: Al Roker receives a medal from Deborah Roberts after running the Brooklyn Half Marathon

Roker marked an athletic milestone on May 22, 2022, when he completed the Brooklyn Half Marathon. He was greeted at the finish line by Roberts, who hung a medal around his neck.

“Thanks to the folks at @nyrr for some great shots crossing the #finishline and getting my medal from @debrobertsabc,” Roker wrote in the Instagram caption.

The couple celebrated their son’s high school graduation in June 2022. Both parents shared tributes to Nick on social media to mark the milestone.

“And just like that! Nick Roker: High School graduate from the [Aaron School],” Roker captioned photos of Nick as a toddler and a high school graduate. “We are sooo proud of this young man.”

A few months later, the pair dropped Nick off at college to start his freshman year.

November 2022: Al Roker is hospitalized for blood clots in his legs and lungs; Deborah Roberts shows her support

In late November, Roker gave fans an update on his health after he was absent from Today for two weeks. The anchor revealed on Instagram that he had been hospitalized for blood clots in his legs and lungs, but was “fortunate to be getting terrific medical care and on the way to recovery.”

Roberts posted a message of support on her own profile, writing, “You are the shining sun and star in our family @alroker Love you so much. Can’t wait til you’re back home and feeling like your old self again.”

A few days later, Roberts shared another update on Instagram as the couple celebrated Thanksgiving. “Thursday thankfulness and then some. Holding on tight and cherishing this moment like never before,” she wrote, in part, along with a photo of her and Roker with their kids.

The holiday marked the first time in 27 years that Roker missed the annual Macy’s Thanksgiving Day Parade. Roker shared a snap of himself taking in the parade at home while supporting his co-hosts, Hoda Kotb and Savannah Guthrie. Roberts shared a similar photo on her own page, along with the caption, “Thankful beyond words. Grateful for all the support and well wishes from every corner.”

On Nov. 30, PEOPLE reported that Roker was rushed back to the hospital one day after his Thanksgiving release.

Al “had to go to the hospital in an ambulance and [Roker’s wife Deborah Roberts] was locked out of her car and couldn’t get inside it. The car malfunctioned. She couldn’t get her phone or any of her belongings,” a source told PEOPLE.