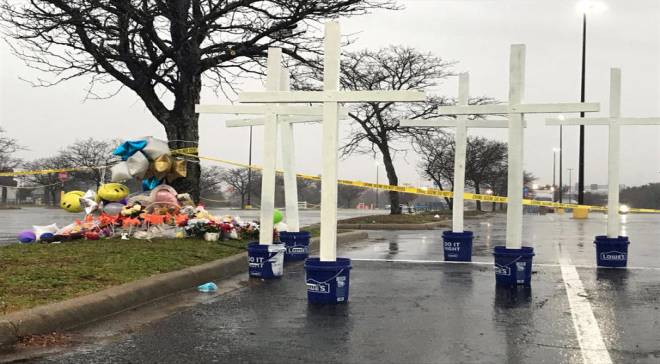 CHESAPEAKE, Va. – The man accused of fatally shooting six people and wounding multiple others at a Walmart in Virginia late Tuesday legally purchased the gun that morning, police said Friday.

Officers also found a note on the man’s phone that may help investigators determine motive in what was the nation’s second high-profile mass shooting in less than a week.

The gunman, identified as Andre Bing, legally purchased the 9mm handgun used in the shooting “from a local store” early Tuesday, police said. He had no criminal history and died of a self-inflicted gunshot wound, police said.

Like the large majority of U.S. states, Virginia does not require a waiting period between the time of purchase and the actual physical transfer of a firearm, according to the nonprofit Giffords Law Center to Prevent Gun Violence.

Early Friday, rain fell steadily on six white crosses at the site of a makeshift memorial next to the Walmart parking lot. The store was still closed, with first responders moving around the site.

Maria Pulley, 60, a bank manager who lives in the area, came back in the rain to put red bows on the crosses.

“I just wanted (them) to know that they’re remembered,” Pulley told USA TODAY. “And we’re a community and that when they hurt … we all hurt.”

The city of Chesapeake said Thursday that two of the injured people remained hospitalized, one in critical condition and the other one in fair/improving condition.

Here’s what we know:

Detectives conducted a forensic analysis of Bing’s phone, which was located at the scene, and discovered a note labeled “Death Note” on the device, police said.

In the note, which police shared publicly with redactions, the author claimed he was “harassed” and “laughed” at by people, later referencing a “management team” and “associates.” The note makes numerous references to “God” and “murder.”

Police on Friday also said officers executed a search warrant of Bing’s home and found a box of ammunition and “various items” related to the handgun, including a box, receipt and other paperwork.

‘He was going hunting,’ one witness alleges

Police and witnesses say Bing pulled out a handgun Tuesday night before an employee meeting and began firing in the break room. While one Walmart worker initially said Bing fired randomly, another later said she believes the attack was targeted.

Employee Jessica Wilczewski said Bing, an overnight team leader, came into the break room before the late shift started and opened fire with a purpose.

“The way he was acting – he was going hunting,” Wilczewski told The Associated Press. “The way he was looking at people’s faces and the way he did what he did, he was picking people out.”

Wilczewski, who had worked at the store only a few days, said the gunman let her go when he recognized her, but fired again at other employees he had already hit and were down.

Who were the victims?

Walmart confirmed all those killed – who ranged in age from 16 to 70 – were employees.

The victims were identified Wednesday as Brian Pendleton, 38; Kellie Pyle, 52; Lorenzo Gamble, 43; and Randy Blevins, 70, who were all from Chesapeake; and Tyneka Johnson, 22, of nearby Portsmouth.

Police initially withheld the name of the 16-year-old who was killed, but identified him Friday as Fernando Chavez-Barron of Chesapeake.

Many had been longtime Walmart employees, and one planned to retire next year.

Chavez-Barron had just started working at the store and used his first paycheck on gifts for his mom, WTVR-TV reported.

“I’m out of words, and speechless that it was him,” Joshua Trejo-Alvarado, 17, a friend, told WTVR-TV. “I was hoping everything was a dream until today. I wish he was still standing here with me.”

A crowdfunding drive from Victims First is among the fundraising efforts for victims and survivors of the shooting. GoFundMe verified the authenticity of the campaign.

Chesapeake Mayor Rick West was expected to hold a community candlelight vigil Monday to honor and grieve the victims.

Ahead of the vigil, the Chesapeake City Council will hold a special meeting where city leaders are expected to confirm an emergency declaration to “free up funding to support recovery following the Walmart shooting,” the city council announced. If city leaders agree on the measure, the state of emergency will continue through Dec. 5.

Brenton Holloman, 41, assistant manager at an Edible Arrangements store near the Walmart, called the shooting “senseless.”

Malarie Madden, 30, visited a mall near the Walmart on Friday. She lives in North Carolina but shops in the area all the time. She said safety is something she’s always concerned about, and the shooting “hit a little bit harder now that it was this close to home.”

But she said it wasn’t going to stop her from getting out.

The FBI’s Norfolk field office is assisting Chesapeake police with the investigation.

The incident came amid a wave of deadly gun violence in the U.S. Days before, a gunman attacked Club Q, an LGBTQ+ nightclub in Colorado Springs, killing five people and injuring more than a dozen others. The week before that, three students at the University of Virginia were fatally shot.