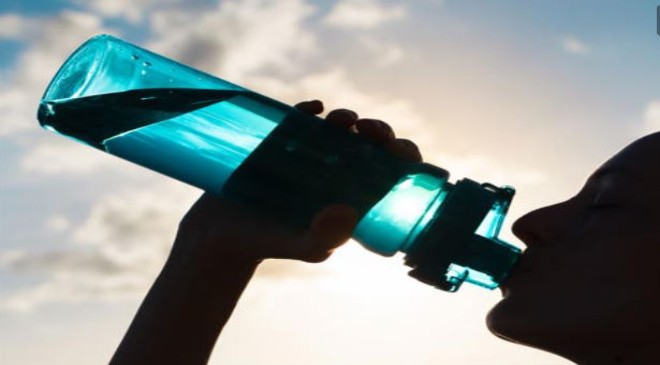 Q: I know it’s important to stay hydrated, but what happens if I drink a lot of water in one sitting? Is it possible to drink too much?

A: What happens when you drink a lot of water depends on your health, your activity at the time and how much you mean by “too much.”

The most likely outcome is just that you’ll urinate more frequently to get rid of the excess water.

But it is possible to go overboard. Normal kidneys can release up to a quart of fluid every hour. If you drink more than that, you’ll retain the excess water in your body, which causes a condition known as hyponatremia and can be hazardous to your health. Mild hyponatremia causes few symptoms, but more severe cases — when your blood sodium levels go below 130 mEq/L — can lead to brain swelling and progressive neurological symptoms, including confusion, disorientation, seizures, coma and sometimes death.

Hyponatremia was the cause of death in a participant in a 2007 radio contest in California, in which the prize went to whoever could drink the most before having to urinate. The contestant died after reportedly drinking nearly two gallons of water over two hours — clearly exceeding what her kidneys could handle, which would be about two quarts, or a half gallon, over two hours. Excessive water intake also has led to the deaths of students during fraternity hazing rituals.

But it’s important to remember that these are contrived situations that most people would never experience.

To understand why this is unlikely to happen in your regular life, you need to know how we regulate the amount of water in our bodies. The controls of body water balance are twofold: thirst and the secretion of a hormone called arginine vasopressin (AVP, also known as anti-diuretic hormone) from the pituitary gland.

When you’re outside on a hot summer day, sweat losses cause gradual dehydration. The brain senses changes in the blood concentration — mainly increased sodium — and releases AVP, which travels to the kidneys and tells them to save water. As a result, very little urine is excreted; it also becomes very concentrated and has a darker yellow color.

But at a certain point, urine concentration alone isn’t enough to prevent dehydration. That’s when higher centers in the brain are activated to stimulate thirst.

When you aren’t dehydrated and drink excess water, the brain also senses this through opposite changes in the blood concentration — mainly decreased sodium. Secretion of AVP is inhibited, which tells the kidneys to release more water. Then a large volume of dilute urine — very pale in color — is excreted to get rid of the excess water.

You also won’t feel thirsty. But that isn’t very helpful: We don’t usually drink fluids because of thirst. Instead, our fluid intake tends to be driven by flavor (like my daughter’s love of Diet Coke); our need to accompany solid foods with a beverage; and desired side effects, as is the case with coffee and alcohol.

That being said, there are certain conditions and activities that can limit how much urine the kidneys release and your likelihood of experiencing hyponatremia. These include health conditions such as the syndrome of inappropriate anti-diuretic hormone secretion; medications, including diuretics and antidepressants; and even nausea and exercise.

Perhaps the best studied of these is exercise-associated hyponatremia, particularly in marathon, triathlon or ultramarathon races. These hyponatremia cases were initially thought to be caused by sweat sodium losses, but subsequent studies showed that they were mostly because of too much fluid intake during the events.

Fluid intake during exercise rarely exceeds one quart per hour. But exercise stimulates the release of AVP, so even “normal” amounts of water consumption can cause water retention and hyponatremia under these conditions. Nausea has a similar effect on AVP secretion.

So if you’re exercising or nauseated, you can’t excrete water as normally as when you’re sitting comfortably watching a movie — unless, of course, the movie makes you nauseated.

So how much water should I drink?

I participated in consensus conferences on exercise-associated hyponatremia, which came to a very simple conclusion: You should drink according to your thirst, during exercise or at rest, but not an arbitrarily determined amount. (I’ve consulted for Otsuka Pharmaceutical, which manufactures a drug to treat hyponatremia.)

Ideal fluid intake varies by person, depending on a variety of factors. There are some medical conditions in which increased fluid intake is recommended, such as a tendency to form kidney stones.

Special concern should be given to older individuals, who generally have a decreased sense of thirst. This usually doesn’t result in dehydration, but under conditions of increased fluid losses (increased sweating during heat waves, diarrhea), they should be encouraged to drink more fluids even if they aren’t thirsty.

But for most people, drinking more than needed to maintain water balance is neither necessary nor medically helpful.

In fact, the recommendation to drink eight glasses of eight ounces of water daily isn’t supported by evidence-based data or known physiological principles.

The bottom line: If you don’t feel thirsty, chances are you’re properly hydrated. But if you do feel thirst, drink as much as you need until the thirst goes away.

That is not only the best medical advice to maintain body water balance, but it’s also common sense that has enabled the survival of the human species for millennia. We shouldn’t abandon that successful strategy now.