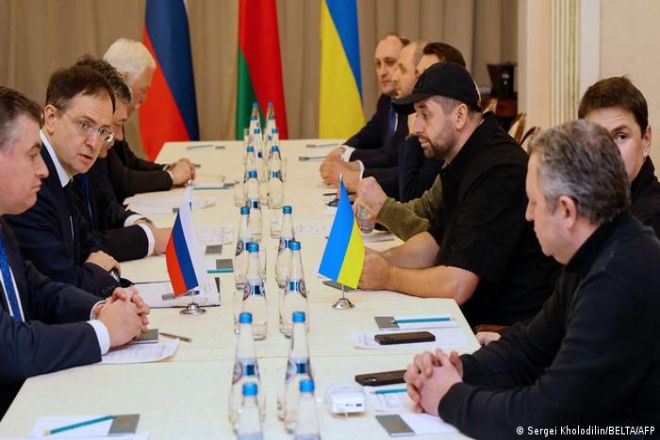 Anewly passed resolution demanding Russia pay reparations for the war in Ukraine threatens the existence of the United Nations, according to a top Kremlin official.

“It looks like the beginning of the United Nations agony as a key international institution for reconciliation,” Russian Security Council Deputy Chairman Dmitry Medvedev, who held the presidency for a term, wrote on social media. “The end will be painful for the entire international community. We will do without such a ‘united nations’ organization.”

Ukrainian President Volodymyr Zelensky hailed the U.N. General Assembly’s support for “establishing an international mechanism for compensation for damage” as a step toward fulfilling one of the pillars of Zelensky’s preferred “peace formula.” Russian officials have dismissed Zelensky’s demands as “unrealistic,” but Kremlin officials fear that Western powers will invoke the U.N. resolution as a basis for giving frozen Russian Central Bank reserves to Ukraine.

“Naturally, the organizers of this process are trying to complete the robbery of our gold and foreign exchange reserves, which were completely illegally blocked,” Kremlin spokesman Dmitry Peskov said Tuesday. “This is a formalization of this robbery using the United Nations platform.”

UKRAINE: ‘RUSSIA WANTS A PAUSE TO REPLENISH ITS FORCES’

Russia lost access to about $300 billion in foreign currency reserves, about half of the Russian Central Bank’s stockpile, in February, when the United States and allied governments froze the bank’s overseas assets in retaliation for Russian President Vladimir Putin’s attempt to overthrow the Zelensky government.

“The creation of an international compensation mechanism … will make it possible to compensate all the losses caused by the Russian war, moreover at the expense of Russian assets,” Zelensky said Monday evening without explicit reference to the Russian Central Bank reserves. “The reparations that Russia will have to pay for what it has committed are now part of the international legal reality.”

The reparations resolution passed with 94 votes in favor. Russia mustered just 14 votes against the proposal, and another 73 countries abstained. Ukrainian officials emphasized that Moscow has backed multiple reparations initiatives, including after Iraqi dictator Saddam Hussein’s invasion of Kuwait and following World War II.

“Seventy-seven years ago, the Soviet Union demanded and received reparations, calling it a moral right of a country that has suffered war and occupation,” he said. “Today, Russia, who claims to be the successor of the 20th century’s tyranny, is doing everything it can to avoid paying the price for its own war and occupation, trying to escape accountability for the crimes it is committing.”

Russian Ambassador to the U.N. Vassily Nebenzia maintained that the reparations resolution was just a maneuver to use Russian government funds to pay for Western military aid to Ukraine.

“We underscore that neither the General Assembly nor any ‘mechanism’ can ‘cancel’ the sovereign immunity of state assets, which is granted by international law,” Nebenzia said. “Those states who will support this decision by the [General Assembly] will become complicit in the illegal expropriation of a third country’s sovereign assets and another act of abuse of UNGA powers in the interests of the West.”

Nebenzia continued by accusing Western powers of hypocrisy on the grounds that “Western states never considered ‘reparations’ as a means to atone for their own sins” — a barb that continued a Russian pattern of invoking “the centuries of slavery and oppression, colonialism, and neocolonial domination, military aggression, and interventions” to dissuade countries in Africa and Latin America from aligning behind Ukraine.

CLICK HERE TO READ MORE FROM THE WASHINGTON EXAMINER

The Russian envoy had some success with that argument when South Africa’s representative decried the “message of exceptionalism” sent by the resolution, although South Africa and dozens of other countries merely abstained from the vote rather than taking a side. Yet some developing countries defended both the General Assembly’s authority to take up the matter and the proposal at stake in the debate.

“It is the right thing to do,” Guatemalan Foreign Minister Mario Bucaro said.