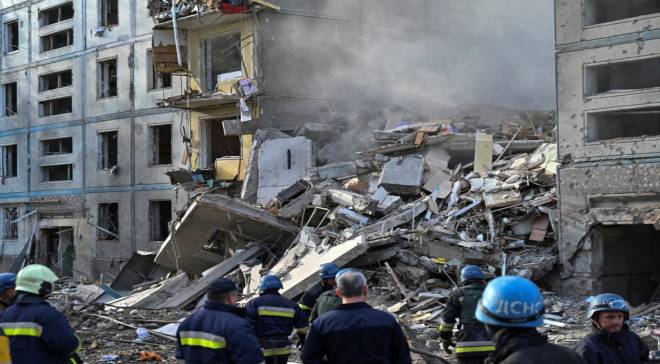 (Bloomberg) — US President Joe Biden leveled more criticism on Russia’s war in Ukraine, calling the missile attacks “merciless” and “way over the top” hours after a Russian-produced rocket struck near Poland’s borders.

The US and its allies met at the sidelines of the Group of 20 summit in Bali, Indonesia and pledged to support Poland’s investigation into the incident. A consensus has been emerging at the big ticket meeting that Moscow’s war against Ukraine cannot be accepted.

Leaders are seeking to finalize a draft communique on Wednesday that seeks to bridge differences over how heavily to condemn Russia for its war in Ukraine.

The summit this week saw a flurry of high-level meetings between world leaders with discussions touching on the global economy, the war in Ukraine and growing tensions over tech supply chains.

Even if it was proved that Russia was behind the strike, NATO’s Article 5 wouldn’t get automatically triggered, a senior French official said, adding that no one wants an escalation with Moscow that could prove to be highly dangerous.

What happened in Poland has yet to be clarified and identifying a missile doesn’t prove who fired it as many countries use the same weapons, the official said.

President Joe Biden and UK Prime Minister Rishi Sunak met in an open-air room in a luxury resort hotel, surrounded by a carp pond and tropical plants, shielded from the midday sun by a thatched roof.

Biden said Putin’s attack on Ukraine is “merciless” and “way over the top.” Sunak agreed and described the US as the UK’s “closest ally.” Both leaders declined questions about the missile strike in Poland.

“And it is happening while we all here at the G-20 have expressed that this war should end and that Russia should withdraw its troops and stop its brutal attacks,” he told reporters in Bali.

Indonesia President Joko Widodo took the G-20 leaders on a tour of a mangrove forest in Bali after waiting for many of them to finish up a meeting on the rocket strike near Poland’s border with Ukraine.

The world leaders, which included Biden, India’s Prime Minister Narendra Modi and French President Emmanuel Macron, were given t-shirts and baseball caps to wear during the tour.

Foreign Minister Sergei Lavrov left Bali on Tuesday evening after he attended a dinner together with heads of other G-20 delegations. On the second day of the summit, Russia is expected to be represented by Finance Minister Anton Siluanov.

Lavrov has earlier said that Russia supports the draft communique prepared by G-20 sherpas. He talked before the reports emerged of missiles hitting near Poland’s border with Ukraine and hasn’t given any comments since than.

Yi told Bloomberg News that the two had a broad, in-depth conversation, after finishing up a meeting with Yellen

Biden said leaders have agreed to support Poland’s investigation into a rocket blast and pledged to collectively determine the next step.

He added it was “totally unconscionable” what Russia was doing and reiterated support for Ukraine.

The G-20 leaders’ scheduled visit to a mangrove forest in Bali saw Indonesia President Joko Widodo turn up while many heads of state attended a meeting called by Biden to discuss the situation in Poland.

Widodo said he hadn’t spoken to the other leaders this morning.

Biden Convenes a Meeting of Leaders on Events in Poland (8:56 a.m.)

Biden has started a meeting of leaders on the events unfolding in eastern Poland. Among those in attendance are leaders from Germany, Canada, France, Italy, Japan, UK, the European Commission and European Council.

The US President declined to answer reporters’ questions on what has happened as he headed into the meeting.

Italian Prime Minister Giorgia Meloni said she will be meeting in Indonesia with allies from the North Atlantic Treaty Organization and European Union to discuss what happened and look at the next steps.

The events further confirm the severity of the Russian attack against Ukraine, she said in a statement.

European Council President Charles Michel said he would call a coordination meeting on Wednesday of European Union leaders attending the G-20 summit in Bali. He tweeted that he spoke with Polish Prime Minister Mateusz Morawiecki and “assured him of full EU unity and solidarity in support of Poland.”

Prime Minister Rishi Sunak spoke today with Polish President Andrzej Duda and reiterated the UK’s solidarity with the European nation, according to a statement from his office.

“The leaders agreed to remain in close contact and continue coordinating with our international partners, including NATO Allies, on the next steps,” Rishi’s office said in an email.

European Council President Charles Michel said he would call a coordination meeting on Wednesday of European Union leaders attending the G-20 summit. He tweeted that he spoke with Polish Prime Minister Mateusz Morawiecki and “assured him of full EU unity and solidarity in support of Poland.”

Poland is considering whether to formally ask the NATO military alliance for consultations after a deadly explosion near the Ukraine border.

Poland may invoke Article 4 of the NATO treaty, National Security Bureau Chief Jacek Siewiera told reporters late on Tuesday after an emergency government meeting. The protocol allows any NATO member nation to request consultations if it believes that its territorial integrity, political independence or security is at risk.