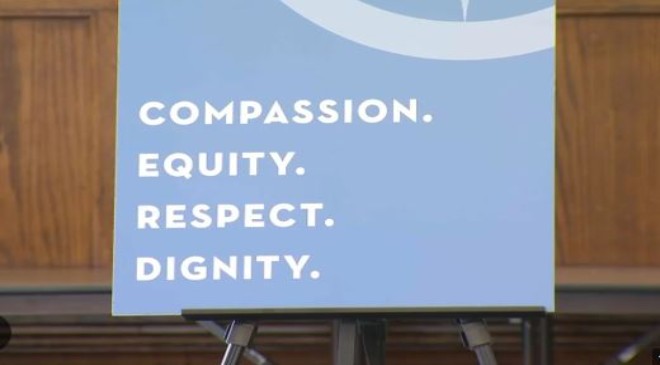 The woman started screaming. Her belongings were on the street. The marshal served her papers. She didn’t want to leave.

A cop was on the Chapel Street scene too. Until just a week earlier, it would have been up to the cop to try to calm the woman down, deal with her emotional stress and attendant mental-health problems.

Now, by contrast, the cop and marshal had someone else to call: New Haven’s new crisis response team, called COMPASS (for Compassionate Allies Serving Our Streets).

A COMPASS crew of social workers and ​“peer recovery specialists” — people who in the past have experienced homelessness or addiction or mental-health woes — arrived on the scene. One of the workers, Yichu Xu, recognized the woman from previous social work he had done. Another team member knew her as well.

They got to work helping to calm the woman down. They spoke to her about how to find temporary housing. Her family members helped her move her belongings.

She left. No arrest. No one hurt. The COMPASS team followed up and helped her preserve her federal Section 8 rental subsidy for a new place.

Xu and fellow team members told that story Wednesday following a crime update press conference at police headquarters. At the press conference, Mayor Justin Elicker reported that the COMPASS team has responded to 23 incidents since hitting the street on Nov. 1.

The program, a product of two years of community planning following mass protests sparked by George Floyd’s murder, is in a pilot phase. One team is responding to calls eight hours a day. 911 dispatchers do not call them at first, but wait for a referral from a cop or firefighter on scene.

The plan is to expand the program to around-the-clock shifts and to have the team called out directly when police or firefighters aren’t needed or aren’t the responders best trained for a mental-health crisis.

Fourteen of the first 23 calls were referrals from cops and firefighters, Elicker reported. The COMPASS team initiated the others while making rounds around town.

Officials envision a day when COMPASS responds to up to 10 percent of the city’s 911 calls.

Another case in the first week of COMPASS’s work involved a man in the West River neighborhood who refused to go to the hospital for needed treatment. Elicker said the team was able to help him get there and then followed up to ensure ​“he was connected” to social services.

“I expect the number of calls to go up when police and fire get used to this extra tool that’s available to them,” Elicker said.