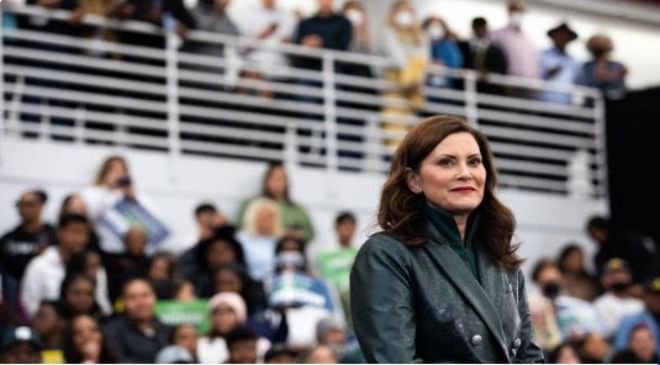 Gov. Gretchen Whitmer, a Democrat who stood up to former President Donald J. Trump and was once considered one of the most endangered governors in this year’s elections, won a tough race for re-election in Michigan, according to The Associated Press.

Ms. Whitmer beat her Republican rival, Tudor Dixon, a former steel industry executive turned conservative news commentator, in a race that hinged on abortion, the economy and threats to democracy. For the first time in a Michigan governor’s race, both contenders were women.

In the hard-fought race, Ms. Whitmer pulled ahead in the polls, casting herself as an experienced leader who had navigated her state through a life-altering pandemic and believed in working with Republicans, who control both chambers of the Michigan Legislature. She often reminded voters of the violent threats of political violence she faced, saying her state needed a “problem solver, not a culture warrior.”

Ms. Dixon made light of the threats Ms. Whitmer faced. Before the 2020 election, federal prosecutors accused several men of plotting to kidnap Ms. Whitmer, partly over her handling of the pandemic. Two men pleaded guilty, two men were acquitted and, in August, two others were convicted by federal jurors. Three more men were convicted in state court for aiding the plot.

Ms. Dixon, a Trump-endorsed Republican, initially struggled to catch up to Ms. Whitmer after a crowded, bruising Republican primary that pitted establishment Republicans against die-hard Trump loyalists over false claims that the 2020 election was stolen. She was short on cash and limited in advertising, and she faced challenges in building out her campaign infrastructure.

But Ms. Dixon made up ground as Mr. Trump and far-right Republicans jumped into the fray to support her. Ms. Dixon harnessed voters’ anger over high food and gas prices, crime and pandemic-driven unemployment, school closures and business restrictions. She leaned heavily into cultural issues that she cast as protecting women’s and parents’ rights, pledging to keep transgender athletes out of girls’ and women’s sports.

In final days of the campaign, Ms. Dixon, who has said she is against abortion even in cases of rape or incest, pressed the issue of education, calling for more tutoring and to address low test scores. Ms. Whitmer promoted major investments in K-12 education and infrastructure and vowed to protect the right to abortion and stop the disenfranchisement of voters.