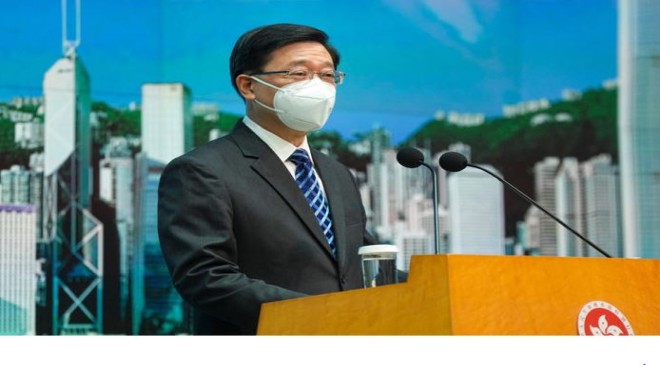 Hong Kong’s leader has dismissed calls to scrap a Covid-19 health code arrangement or ease rules on mask-wearing despite the smooth hosting of the Sevens rugby event over the weekend, hinting that the current “0+3” approach will not be aborted soon.

Chief Executive John Lee Ka-chiu, who earlier declared the mega sporting event to be a resounding “success”, on Tuesday doubled down on present pandemic policies, arguing they had already enabled the city to open up and allowed authorities to tailor make relaxed arrangements for international events.

More of such global events could be held in a similar manner, he said.

Do you have questions about the biggest topics and trends from around the world? Get the answers with SCMP Knowledge, our new platform of curated content with explainers, FAQs, analyses and infographics brought to you by our award-winning team.

Under the “0+3” model, overseas arrivals must undergo three days of medical surveillance, during which they are allowed limited movement in the city and must be tested for Covid-19 regularly. But exemptions were made for those attending a high-powered bankers’ summit last week, allowing them to visit museums and dine at designated venues.

“What is important is under ‘0+3’, already a lot of activities have been taking place. At the present moment, I think ‘0+3’ has served the purpose of Hong Kong to an acceptable and anticipated extent,” Lee said before the weekly meeting with his advisers in the Executive Council.

Calls for Hong Kong to further open up were renewed as a series of key events took place in the city over the past week, with top officials, including Lee, seen unmasked and enjoying the festivities with guests at the Sevens under rules allowing stadium spectators to eat and drink.

But the chief executive on Tuesday rejected calls from the tourism sector to scrap the “amber” code on the government’s risk-exposure “Leave Home Safe” app for incoming travellers, which bans them from restaurants and bars during their three-day medical surveillance.

Lee said despite the city having already opened significantly amid a stable pandemic situation, there were still some 4,000 to 6,000 infections daily. He also pointed to a recent high of 18 coronavirus-linked deaths reported in a single day, warning the pandemic had never left.

He made clear that the government currently had no plans to lift general mask-wearing rules, when asked if there was more room to relax measures outside stadium or event venues.

“Masks will stay on because I think all experts have indicated masks [are] important to control the spread of the disease. After all, we have to be conscious of some of the uncertainties of Covid,” he warned.

Citing the city’s latest Omicron-fuelled fifth Covid-19 wave, Lee said safety arrangements in place could not cope with the rampant spread of the virus, therefore masks were needed as one of the most important measures.

Lee stressed that the government’s overall strategy was to balance the risks against economic and social needs, and to allow activities to proceed amid what was considered acceptable restrictions.

That included the latest announcement on Monday to allow overseas visitors in group tours entry into designated tourist attractions, including restaurants, theme parks and museums while serving their three-day medical surveillance.

“The tour groups’ arrangement takes into account the needs of the tourism industry and Hong Kong’s economy, but [any relaxation] must be carried out step by step while the risks are under control,” Lee said when asked if individual travellers could enjoy the same exemptions soon.

He added that government departments would from time to time review the situation and look at data as the city organised more activities, to allow more events with “the maximum of freedom”.

For the Asia Summit on Global Health to be held from Thursday to Friday, dozens of overseas visitors would be exempted from amber code restrictions, in line with arrangement for participants of the banking conference last week and the ongoing Legal Week, the Health Bureau told the Post.

They must have meals inside designated dining venues arranged by summit organisers and comply with compulsory testing requirements for inbound travellers.

The Hong Kong Trade Development Council said exempted arrivals would also be allowed to attend the Hong Kong International Medical and Healthcare Fair to be held at the Convention and Exhibition Centre in Wan Chai from Wednesday to Friday.

A council spokesman said if a Covid-19 patient had visited the fair or an exhibitor was found to be infected, the Centre for Health Protection would alert relevant parties to immediately clean and disinfect the booths in question, temporarily close them if appropriate and cooperate with contact-tracing work.

Meanwhile, respiratory disease expert Dr Leung Chi-chiu said the city should proceed with the lifting of all its travel restrictions and push forward with the so-called “0+0” scheme.

“The fact that [authorities] need to exempt the amber code for major events clearly shows that the amber code discourages foreign travellers from visiting Hong Kong,” said Leung, who is also a former chairman of the Hong Kong Medical Association’s advisory committee on communicable diseases.

“If we really want to reopen the world and recover our competitiveness, I really see no reason why we should hesitate to adopt ‘0+0’ to get what our community and economy deserve after abandoning the quarantine.”

But he agreed that Hong Kong’s mask mandate should remain in place until the city had got through the coming winter, which could trigger a rise in respiratory infections, and the government had relaxed all other social-distancing rules and testing measures.

Professor Benjamin Cowling, an epidemiologist at the University of Hong Kong, also said there was sufficient scientific evidence to support a transition to “0+0” as soon as possible, adding that the amber code had contributed little to minimising local virus transmission.