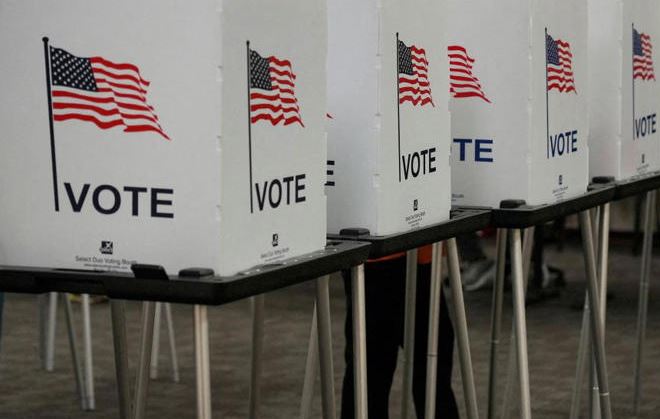 With just a few days left before polls close in America’s crucial midterm elections, Republicans appear better positioned than ever to regain control of the House of Representatives and potentially the Senate as well.

History shows that the president’s party typically loses seats in midterm elections, and despite some optimistic signs over the summer, Democrats now seem likely to follow that pattern on 8 November.

Republicans’ prospects have grown brighter as more voters identify the economy as their top priority, after many Democrats spent the summer campaigning on the importance of abortion rights following the supreme court’s reversal of Roe v Wade in June.

An ABC News/Ipsos poll taken last week showed that 49% of Americans named the economy or inflation as the most important issue determining their vote for Congress, compared to 14% who said the same of abortion.

Surveys show Republicans enjoy an advantage with voters when it comes to economic concerns, and the party’s candidates have gained steam in the polls as Americans fret over rising prices and the possibility of a recession. Republicans now hold a 1.3-point advantage over Democrats on the generic congressional ballot, according to the FiveThirtyEight average. One survey from the Republican polling firm Cygnal found the party with a three-point lead on the generic ballot, representing a four-point swing in five weeks.

“I expect the GOP to add another one to two points to their generic lead in the closing week,” Brent Buchanan, Cygnal’s president and founder, said. “It’s much better to be a Republican candidate right now than a Democratic one.”

Given Democrats’ narrow majorities in both chambers of Congress, Republicans only need to flip a handful of House seats and a single Senate seat to regain control, and they are heavily favored to capture control of at least one if not both chambers.

This week, the Cook Political Report moved another 10 House seats in Republicans’ direction, underscoring how Democrats have been forced to fight on an expanded map in the final weeks before election day. Congressional districts that Joe Biden won by double digits two years ago now appear to be in play, which has forced Democrats to defend seats previously considered to be safe. Republicans will also enjoy the benefits of a favorable round of redistricting following the 2020 census, which allowed the party to reconfigure the House map in a number of battleground states.

On Wednesday, the Congressional Leadership Fund, a Super Pac supporting House Republicans, announced a $5.6m ad blitz in Democratic-held districts that had attracted little attention earlier in the campaign cycle. The CLF is spending $1.8m to try to unseat Congressman Sean Casten, whose seat was just moved from likely Democratic to lean Democratic by the Cook Political Report. Biden carried Casten’s district in the suburbs of Chicago by 11 points in 2020.

“Enthusiasm behind Republicans’ fight to win the House majority continues to grow every day,” said Dan Conston, the president of CLF. “All cycle we made it our priority to expand the map as far as possible and late breakers are giving us the opportunity to press even deeper in the final stretch.”

Democrats’ Senate prospects appear similarly grim. As of this week, FiveThirtyEight gives Republicans the narrowest of advantages to take back the Senate, marking the first since July that Democrats were not favored to maintain control of the upper chamber. Democratic incumbents previously expected to hold on to their seats have watched their polling advantages vanish in the past month.

One poll conducted by the Saint Anselm College Survey Center showed the Democratic senator Maggie Hassan trailing her Republican opponent, Don Bolduc, by one point, marking a seven-point swing in a month. On Thursday, Republican Herschel Walker also took the lead in the Georgia Senate race for the first time since June, according to FiveThirtyEight’s polling average. The Democratic senator Raphael Warnock has been unable to establish a clear lead in the race, despite recent accusations that Walker pressured two women into having abortions.

Democrats contend that early voting data provides a reason for optimism about keeping the Senate, as more than 35 million Americans have already cast their ballots. In states such as Arizona and Pennsylvania, which could determine control of the Senate, Democrats make up a greater share of the early voting population than they did in 2018. But given Donald Trump’s attempts to raise baseless doubts about the legitimacy of voting by mail, more Republicans are expected to show up at the polls on election day, and that could erase Democrats’ early advantage.

In a speech delivered near the Capitol on Wednesday, Biden sounded clear-eyed about his party’s midterm prospects. Expressing grave concern about the recent attack on the husband of the House speaker, Nancy Pelosi, and the rise in violent rhetoric among some Republican lawmakers, Biden urged Americans to consider the fate of their democracy as they head to cast their ballots.

“This is no ordinary year. So I ask you to think long and hard about the moment we’re in,” Biden said. “In a typical year, we’re often not faced with questions of whether the vote we cast will preserve democracy or put us at risk. But this year, we are. This year, I hope you will make the future of our democracy an important part of your decision to vote and how you vote.”

As of now, Biden’s pro-democracy message does not appear to be resonating with enough voters to avoid a Democratic rout on Tuesday. If current trends hold, a Republican wave could crash over the country next week.