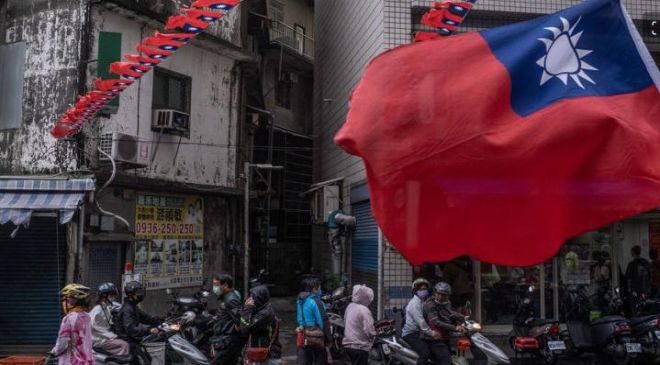 TAIPEI, Taiwan — Xi Jinping’s speech on Sunday broke little new ground on the question of Taiwan but struck a sharper tone, warning the world that China, and China alone, would decide how and when to bring about unification.

Referring to Taiwan earlier in his speech than he did five years ago — a sign of its taking on more importance, analysts said — Mr. Xi stressed that China would “continue to strive for peaceful reunification,” but he also said that China reserved the right to use force and “all measures necessary.”

“This is directed solely at interference by outside forces and a few separatists seeking Taiwan independence,” he said.

Declaring a firm line on Taiwan, Mr. Xi drew one of the speech’s longest stretches of applause from delegates in the room. The focus on external forces signaled growing recognition by China that Taiwan has become more of a priority for the United States, as well as for an increasing number of countries around the world.

“International forces have turned the Taiwan issue into an international affair, which China has always been reluctant to admit in the past,” said Chen Chien-fu, a professor at the Graduate Institute of China Studies at Tamkang University in New Taipei City. “It has always felt that the Taiwan Strait issue is China’s internal affair and internal issue, but now it has become an entire international issue.”

Several analysts interpreted the speech’s Taiwan section as an incremental follow-up to a white paper that the Chinese government published after Nancy Pelosi, the U.S. House speaker, visited Taiwan in August. After her trip, the Chinese Communist Party also conducted military exercises and intensified dispatches of military aircraft and ships near Taiwan, making clear that it reserved the right both to invade, and to engage in activities that would essentially cut the islands of Taiwan off from the world.

A partial or full blockade could force Taiwan into blackouts and an economic halt. All options, Mr. Xi suggested, could be deployed against Taiwan, the self-ruled island that China claims as its territory.

“This lack of substantive commitment to specific policy approaches or instruments signals that China is still exerting what Xi also uses in the speech — ‘strategic patience,’” said Wen-ti Sung, a political scientist in the Taiwan Studies Program at the Australian National University. “They want to preserve policy flexibility.”

In response to Mr. Xi, Taiwan reiterated that it was a sovereign, independent country dedicated to democracy.

“The mainstream public opinion in Taiwan also clearly expresses that we firmly reject ’one country, two systems,’” Chang Tun-han, a spokesman for Taiwan’s presidency, said in a statement. “Taiwan’s position is very firm.”

But in what Mr. Xi said in his speech, or rather in what he did not say, there were hints of less tolerance for autonomy of any kind.

Alexander Huang, a top official with Taiwan’s Kuomintang, the political party that is friendlier to China than the Democratic Progressive Party currently in government, noted that Mr. Xi did not use the phrase “one country, two systems” in his references to Taiwan. It was in the written text of the work report, but not in his delivered remarks regarding Taiwan.

“It shows China wants to have more dominance, and more initiative in their own hands,” Mr. Huang said, adding, “It shows more self-confidence in their tone.”